Well, it certainly wasn’t KimiUso‘s best, but it landed much closer the show’s good side than last week’s episode did. As I’ve said before, KimiUso is an impressive show in its ability to oscillate between episodes that leave me unimpressed and episodes have a profound emotional impact—going from last week’s episode to this week’s was a classic case of this weird dynamic between Good KimiUso and Kind of Meh KimiUso.

And, the thing is, KimUso can have moving episodes while still faltering in some technical aspects. There were places in this episode that my brain was chirping at me, but my heart was still being worked on. To me, that’s an accomplishment, and I think KimiUso can do this when it leans on its strengths to compensate for its weakness. It’s perhaps not the best model to follow, but it’s the one that’s working for the show. 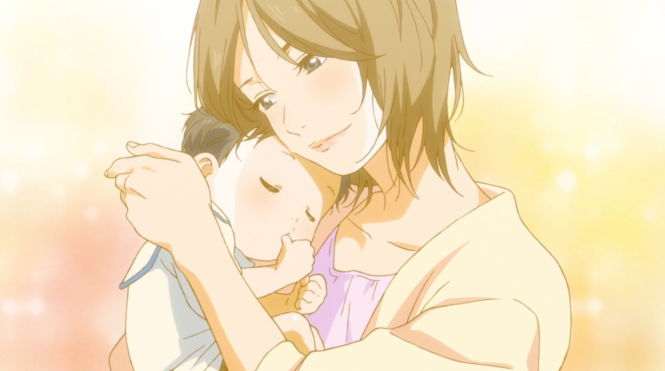 This episode was all about Kousei finally(?) reconciling himself with his feelings about his mother and although I feel like this all happened a little too quickly in the context of the whole show, it was pretty much impossible not to get caught up in the rush of relief accompanying Kousei’s playing and the interesting conflation of motivations from and feelings about his mother and Kaori. It’s his desire to defend Kaori’s musicianship on stage, but once he gets there he spins through a complex evolution of emotion and desires—beginning with his own demand for the audience’s attention and ending with a song to Saki.

Overall, we got a lot on internal monologue this episode, much more than I really wanted. KimiUso has always been a flashback heavy show, but to have Hiroko literally talk us through the exposition of her past with and her guilt over Kousei and Saki felt overly heavy, especially when overlaid on top of Kousei’s performance. But, like I said, KimiUso does other things well even when it throws clunky expositional backstories at us: making us feel using sound and sight.

The unrestrained visual beauty and dynamics of KimiUso have been one of its most attractive features from episode one and the creativity of Kyohei Ishiguro and his team in directing emotional attention via color was on full display here. In the gallery above, I have three different shots that follow each other in relatively quick succession as Kousei’s understanding of how he wants to play “Love’s Sorrow” illuminates the bottom of his dark ocean. In the first, we see the light cast from above causing his mother’s shadow to fall on the sheet music. In the second, we turn towards the light’s entry point; in the third, the whole scene is bathed in gentle, warm colors to accent Saki’s instructions to Kousei on how to play the piece.

As she has been for much of the show, Saki is everywhere in this episode, but this is the first time we’ve ever seen her face—appropriately, as Kousei has finally decided to face his real memories of her. We also finally get to understand why she acted like she did to Kousei: out of desperation, out of fear, out of pain, out of regret. It’s still hard to excuse her horrible behavior towards him, but it’s exactly the appropriate time to finally humanize Saki, to let her become a flawed human being instead of a demon. Just as Kousei comes to terms with the reality of his mother and his memories of her, we the audience also are allowed to see the kind of person she truly was. 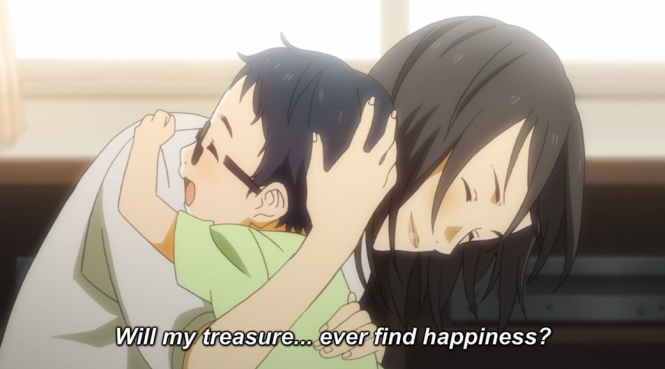 The most beautiful thing in this episode, for me, was at last hearing what it was Saki wanted for Kousei. As she’s lying in her hospital bed, she articulates her worries over him—simple things, things a mother would worry about. Would he brush his teeth? What if he gets sick or gets hurt? How will he be without his mother there for him? It is, really, a tragedy, that a woman who so desperately wanted to love her son could find no better ways to show him that love and that she was left so burdened by the regret of her own passing and of her own choices. For Saki, it was an impossible situation. Like I said earlier, I don’t believe this absolves her of the awfulness she inflicted upon Kousei. But it does allow her to be what she was, and it’s as a broken mother that we and Kousei can leave her behind.

For me, everything outside Kousei’s relief was of pretty secondary interest to me this episode, but I do have to say a few words on the Best Girl race before I finish up today:

Kaori: Obviously, she’s been missing for over an entire episode at this point, and while I like her, she’s never quite had the wheels to make it to the front of the pack. Honestly, I do hope she is able to survive the show—killing her off for the pretty explicitly stated purpose of forcing Kousei to grow as a musician just grates with me.

Emi: Is this what it was like to be a Hatoko fan in Inou Battle and watch the show totally tank her character? Because, other than the radiant moment where Emi declares she’s glad to be a musician, KimiUso has pretty much robbed her character of the grace Emi had in her first few episodes. Her strength of will, her intensity, her passion…all of it’s evaporated in comedic moments. I’m very sad.

Tsubaki: She only got a few lines this episode, but I think she’s back to winning the Best Girl race. Her reflections on her relationship with Kousei and her sudden inability to speak with him were poignant and sad. Probably nobody loves Kousei the way she does and, even if her love is tinged with selfishness, it hurts to see her feeling the effect of him growing up and growing away. 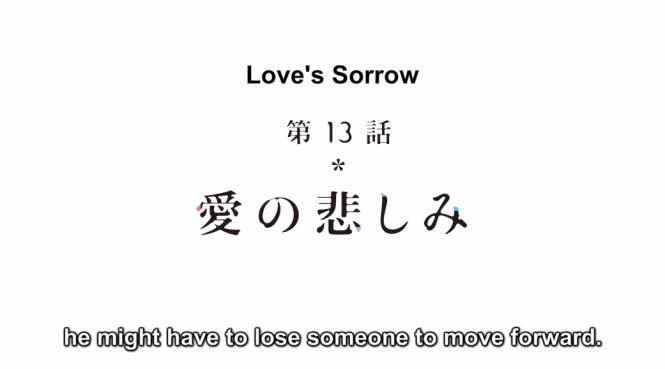