Ahahahaha Tsubaki made her way back to the top of the Best Girl rankings last week just in time for this episode—awesome. Just my luck. I’m sorry, Tsubaki-chan. It seems I doomed you.

The most heartbreaking thing about this whole situation, as is common, is that it was always inevitable. Kousei Arima, Tsubaki’s next door neighbor, never really lived in the same world she did, yet she fell in love with him anyways. But we always want most that which we do not have ourselves, right? Kousei brought that other world to Tsubaki by being small, by being weak, by being a crybaby who needed her, and by being her friend. He was, for a short, while just alike her enough for Tsubaki to find him attainable. And so, even after he begins to play, to get back on his feet, it’s hard for her to realize Kousei is no longer living in the same world she is, but has returned to the way of life where he belongs.

It’s an impossible, unavoidable moment. Kousei is a musician and a genius; Tsubaki, an athelete and a normal girl. Their respective paths through life were always going to diverge and there was never any way Tsubaki could find her way onto the same road Kousei has to take. And he can’t turn back for her—to do so would mean to change the very essence of his nature as an artist.

Having written all that, I’m starting to wonder if Kaori is actually something of a weakness in the show for me. I’ve written my praises for Emi at length, talked a lot of Tsubaki and even Watari, and, of course, talked about Kousei. But everything involving Kaori for me, well…maybe it’s just that KimiUso‘s penchant to lay on the foreshadowing so thickly that it’s more like swimming through mud than trying to grasp shadows. In less ridiculously overstated terms, the extreme nature of the insinuations that Kaori is going to die has effectively sucked out all the tension from her character’s situation. This isn’t one of those cases where knowing what’s going to happen creates a sense of dread—KimiUso‘s insistence on incorporating humor into Kaori’s scenes alleviates that stress in scene and the foreshadowing has been going on for soooo lonnggg that it’s basically just a part of the setting at this point. Is there any pathos left in her situation?

This isn’t to say that KimiUso in incapable of creating emotional resonance at any given time—heck, we just had a magnificent example of how the show can execute an impactful moment in this episode with Tsubaki’s breakdown. But we haven’t been allowed to feel the weight of Kaori’s circumstances, only get heavy-handed hints of what her situations is without getting to actually see it. In other words, this is a classic case of being told, not show: “Kaori’s going to die! Kaori’s going to die!” I fear if the show continues to rely on foreshadowing only to built up Kaori’s death, the actual emotional moment might feel hollow. Now, of course, it could end up being another of KimiUso‘s trademark executional masterpieces, but the reason episode 10 worked so well was in part due to the fact that we had actually seen Kousei struggling with the chains he broke on stage. But maybe it’s all just because Kaori’s positive personality is so strong that it overwhelms the bits and pieces we get of Kousei’s fears.

But all that’s tangential, anyways, to the main motions of this episode, which really was a Tsubaki episode more than anything else. Kashiwagi seems to have decided to make it her personal project to get Tsubaki to realize her feelings for Kousei—”I want to see Tsubaki smile again“—so it’s nice to see Watari speak up for the value in Tsubaki figuring things out for herself. Kashiwagi, correctly, worries that Tsubaki won’t figure it out in time, but I think Watari’s point is well taken. Does it mean anything if Tsubaki doesn’t understand, really understand on her own? Will someone else telling her actually help her to realize what she wants? Will it matter anyways?

For that matter, Tsubaki has lived through this before as a child—she’s seen music and Kousei’s inherent talent for it sweep him away from her, out of her dirty, mud-stained reach the sky of music. Tsubaki can’t fly. All she can do is stand on the same earth and Kousei and push him forward.

The bitter irony is that Tsubaki’s feelings for Kousei are, although she couldn’t realize it until now, at war with each other. She both selfishly wants him to stay by her side forever, yet also unselfishly loves to see him doing what he was meant to do at the piano. She wants him back on his feet, never realizing that in pushing him back into the world of music, she’s pushing him farther from herself. Literally, it’s Tsubaki’s words to him that cause him to realize where his path in the world is—and leads directly away from her.

What a crushing blow for someone as young as Tsubaki to inflict on herself. Adults, maybe, can hurt themselves like this for someone they love, but for Tsubaki…how could she possibly understand the fundamental separation between the way she and Kousei live in the world? How could she ever be prepared to handle the understanding that the thing she wants most for Kousei—his healing and his ability to live—is the one thing that stands, impossible to overcome, between her and him. Someone with as much love as Tsubaki never deserved something like this…but that’s just how it is sometimes.

The really interesting thing for me now is what KimiUso is going to do with Tsubaki after this. I desperately hope we don’t see a repeat of Inou Battle episode 7, where Hatoko had an amazing vulnerable moment in front of Andou and then proceeded to be sidelined and dismissed. I hope KimiUso isn’t so cruel as to deal with Tsubaki in the same way. I hope Kousei chases after her. I hope he’s a good friend who refuses to give up until she tells him why she ran off crying. And I hope, more than anything, that somewhere Tsubaki can find something to heal her broken heart. 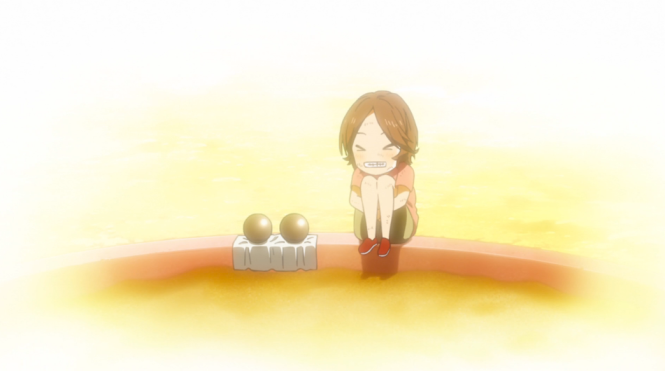