I wasn’t sure about this after the first week, but now…I’m sure. I have too many shows on this schedule, especially in the later half of the week. What’s killing me are the five ongoing shows, but none of them are even close to drop territory. Here’s what did bite the bullet this week:

Your Lie in April, Episode 13: Much better than last week—still working on an emotional level when it’s technical merits falter.

Junketsu no Maria, Episode 2: I’m really kind of bummed that I ended up dropping Junketsu no Maria, and the whole thing feels kind of complicated, so I wrote a post earlier in the week expanding on the problems I had with the show.

Akatsuki no Yona, Episodes 13-15: “The longer I wait, to more I fall behind…oh, wait! I can just combine all the episodes together!”

Absolute Duo, Episode 2: Umm, this is supposed to be a light novel adaptation, right? Which means it’s supposed to suck, right? But it doesn’t, that’s the thing. Whether it’s Thor hanging upside down from his bed to check Julie’s bed or the bunny teacher communicating with a student who flexes his muscles to speak of Tachibana headbutting Thor in the crotch instead of the typical boy falls on girl trope, my suspicions that Absolute Duo has a bit more freshness to it than most light novel adaptations have more or less been confirmed. Thor, too, has something that I would actually consider a personality. Again, is this a light novel adaptation or not? Finally, the scene on the tower at the end of the episode was actually quite touching. Watching Julie essentially scramble to make up excuses for not being in a Duo with Thor and him dismissing each one was a nice moment, one you wouldn’t really expect to see in this type of show. I’m pretty sold on Absolute Duo on this point, so be ready for unfounded fanboying in the future! 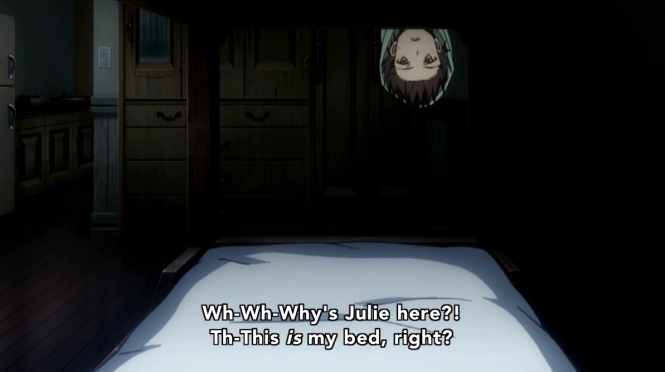 Saekano, Episode 1: This was muuuch better than the preview episode. The meta “humor” Saekano tries to pull off (like in Tomoya and Eriri’s first conversation) is about the furthest thing from clever or funny, but the rest of the premiere was pretty decent stuff. Tomoya’s barely interesting, but Eriri and the visuals carried the show pretty well for me. I didn’t particularly like Eriri in 00, but she came off far less tropey in this episode. Visually, I’m pretty addicted to some of the things Saekano threw at me: a lot of SHAFT-like techniques which, while they generally felt out of place (like the absurd abuse of dutch angles in Tomoya’s conversation with writer girl), I still like; the ever-changing outline colors; lots of great character acting animation; and some visually interesting shots. I’m not really sure that a lot of the cinematographic language is really used appropriately, but it’s varied enough from the traditional types of shots that I’m used to see in anime that it was noticeable and engaging. So, we’ll see what the second episode brings.

Shirobako, Episode 14: Umm…so, how to describe the sensation I had at the moment Zuka reacts to the revelation that all four of her best friends are going to be working on the same project and she’s been left behind? You know how people will often use the cliché, “It felt like I got stabbed in the heart”? As Zuka said, “I would have loved to work with all of you, but I guess that can’t be helped,” I literally had a brief sensation as if I had been stabbed in the heart. And then the tears started rolling. Out of the many painful and poignant moments Shirobako has offered in its fourteen episodes, none have struck me as hard as this single line from an artist whose been left behind by the people she cares about most, after doing everything she can to keep up with them. It’s a tiny, tiny moment and Zuka forges right ahead with positive thinking afterwards, but wow. That hurt. 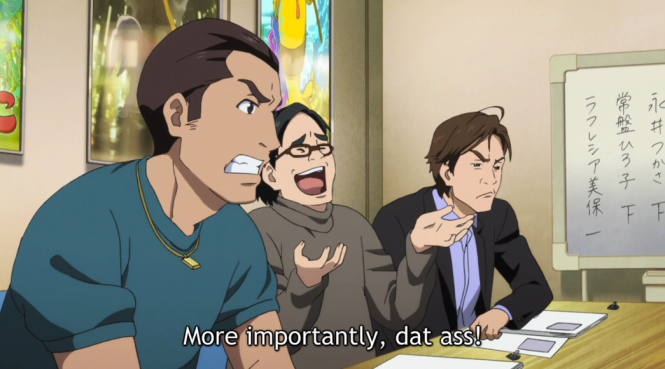 Let’s lighten the mood, now, shall we?

Death Parade, Episode 2: Not quite as intense as last episode, but, for me, it was more pleasant to watch. The behind-the-scenes world of Death Parade‘s judgment system is quite fascinating and some of the questions we were posed this week—can arbiters mess up? what’s up the the “term” Nona was talking about?—have added some depth and lightness the the otherwise psychologically brutal experience of watching the games. With the assistant around (we never got her name, did we?) to add in another perspective, I think we’ll get some fascinating interpretations of what’s happening to the deceased. After all, without in the first episode, we were intruders on the game—a camera invading what was really a very intensely personal moment. Having the assistant in the Quindecim, I think, will take some of the voyeuristic quality out of the games and perhaps make them slightly more palatable.

Durarara!! x2, Episode 2: Gahh waiting a week in between episodes of this show is going to be incredibly painful. And we’re still in new character introduction mode. And, frankly, I don’t know if I’m really going to be able to write much about Durarara!! each week. It’s kind of a show that defies explanation and analysis because it always, always deals in overall effects and atmospheric holistics. Durarara!! is also just at a level of consistent quality very, very, very few shows I’ve watched on a weekly basis have ever been able to aspire to. Death Parade floats around that level, but Durarara!! is just a different type of show from a different kind of era. As far as I’m concerned, it’s unparalleled this season through two episode.

Rolling☆Girls, Episode 2: Now this is the episode I wanted last week and didn’t quiiiite get, which is interesting, because it looks like everything about the show is kind of going to change going forward. The big takeaway this episode is that Rolling☆Girls can indeed be more than just flash and sparkle and impact, but that it can have heart, too. And, perhaps most importantly, it can be really funny. Between the laughs and Masami struggling to reveal her identity as Maccha Green—I don’t think it’s just a random line when she says “There’s no one in Maccha Green’s suit”—all the bombast and color of last week’s premiere felt directed towards a purpose, and having the stakes raised just a little bit higher on the roller coaster gave the episode a sense of urgency that the premiere’s fight lacked. Of course, now the focus of the show is entirely different, so all these observations might not apply next week. At the very least, though, I’m feeling much more affectionate towards Rolling☆Girls now than I was last week, and I’m happy about it.