Well, to be totally honest, this episode would have been a total disappointment if not for the post-festival scenes and, even then, this was probably one of the weakest episodes Akatsuki no Yona has produced. Unlike the comparable comedy-laden, mostly plotless episode spent in Ki-ja’s village, there were not cultural constructions at work until the very end—meaning that, due to the relatively dull nature of the war games, the episode was relatively boring, something Yona‘s never really fallen to even in its weakest moments. 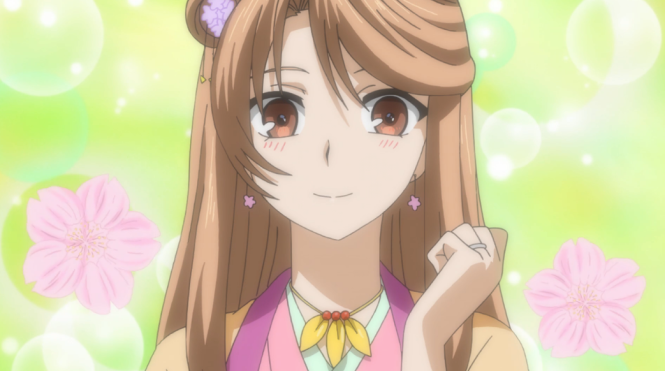 I don’t want to spend too much time complaining about the war games, but I’ll break down quickly the main issues I had with them. Aside from meeting Guen-tea’s über-kawaii waifu, Yuna, (seriously), we didn’t really get much new information about any of the characters or discover anything that mattered. As entertaining as it is to see Su-won fluffing about like a rabbit and befriending the people of the Earth tribe, we already know his true nature—all we’re waiting for is to see Guen-tea realize it, too. There’s not really a sense of urgency in anything that happens, not even from Su-won in a subtle way. It’s just comfortable bopping about, which is fine in some shows. But I expect more from Akatsuki no Yona.

Anyways, I could forgive the war games for not accomplishing much beyond revealing to a single character information we the audience already know if they were entertaining in their own right, but…they weren’t, not really. Having Guen-tea’s chief attendant as the commentator was a pretty lazy, transparent way to avoid having to animate much. It’s probably a production-inspired choice, but having a in-show character literally narrate the events of the battle is pretty dull stuff. Coupled with Guen-tea’s incessant internal monologues rephrasing his unfavorable impressions of Su-won, the episode quickly became ponderous and repetitive, rather than dynamic and exciting. Which, you know, is the opposite of what war games should be.

All this is compounded (or perhaps dictated) by the fact that the entire game is barely animated, relying on a few bursts of action to move the plot of the fight from event to event. It’s a shame, but I suppose that’s the reality of the industry and the way production works. We can’t have episode 6 level sakuga every week, but it’s a bummer we can’t get it for episodes like this. In any case, that’s all I’ll say about the war games, as the fallout from Su-won’s entire visit is more interesting to consider.

As expected, Su-won was more or less faking his innocent demeanor this whole time, with the results of his trip being a revitalized Earth Tribe economy and a solid assessment of Guen-tea and the Earth Tribe’s strength. But, somewhat irritatingly, the actions Su-won takes leading up to the tea deal with Kai and the new demand for stones from the mine occur off-screen. For a show that’s meticulously built its story up to this point, it’s a bit odd to see important event get glossed over and valuable screen time get chewed up by the characters bantering with no particular goal in sight.

That being said, it was good to see Su-won’s reaction to his trip at the conclusion of the episode. He and his guards leave quickly following the news of the mine’s revitalization, as it’s the last bit of confirmation he needs to know how deeply and faithfully the members of the Earth Tribe love Guen-tea. With this in mind, Su-won’s advice to Yuno about selling her tea—”The more difficult something is to acquire, the more desperately people want it”—resonates a little more strongly. The task Su-won has set out for himself is a difficult one, and his words indicate he wants to rebuild the kingdom without the brute force shortcut of war, if at all possible. He’s a driven man, and he desperately wants to restore Koukai.

We’ve always know Su-won to be capable of incisive insights and complex plots, but this trip, while far from altruistic, continues to nuance the early depictions of him as a power-hungry, murderous aspirant to the throne. He’s done a terrible thing to Yona to come to power, but it seems his intentions were indeed as purely focused on the kingdom as he’s stated them to be and he’s living those intentions out in action. Contrast this with Yona’s highly personal motives and Su-won stands out in even greater relief as a ruler seeking the best for the people. It’s no coincidence that the phrasing Su-won uses when referring to Guen-tea (“Now I want him even more.”) echoes almost exactly the words Yona has often used when recruiting the dragons to her side. 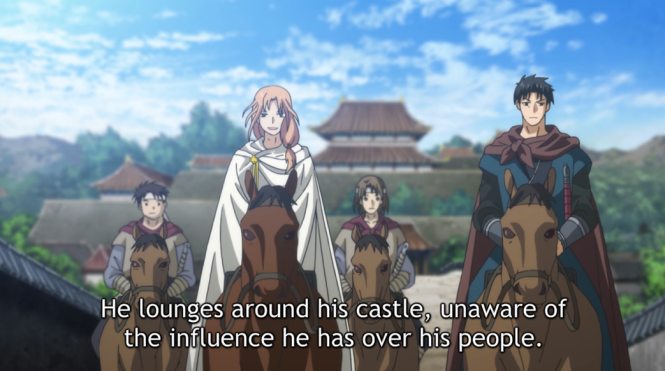 Of course, this leads us, if not directly, back to the most compelling aspect of Akatsuki no Yona‘s main plot—the differing natures of Su-won and Yona’s respective quests. Yona, remember, is essentially on a divinely ordained path to recover the kingdom, but the man (who she hasn’t seen in a long time at this point) who she thinks she must defeat is no monster, but a just a man doing what he can for a country. Both of them, I suspect, see the other as an inevitable obstacle that must be eliminated before their respective goals can be achieved. When their ideologies eventually clash, I suspect the results may be more tragic than triumphant.

5 thoughts on “Akatsuki no Yona, Episode 16”