This is the first in a coming series of three posts reflecting on the various roles of Utena Tenjou, the titular character of Revolutionary Girl Utena. These posts are adapted from an academic paper I wrote in Fall 2014. These posts assume the reader has completed the anime and thus contain spoilers. Citations will be noted in footnotes at the bottom of the piece.

By way of introduction, the thesis of my paper was, in essence, that the character of Utena deconstructs a trio of archetypes and reinterprets each of them in her own identity. This is from the first section of the paper, which details my thoughts on Utena’s narrative role as the protagonist of the story. 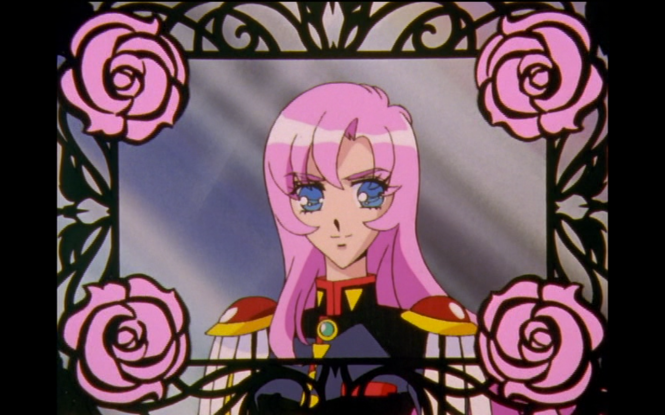 While the titular Utena is ostensibly the protagonist of the anime, she occupies a peculiar narrative space in the structure of the story. Revolutionary Girl Utena is most certainly Utena’s story, but the illumination of her character comes through refracted, rather than projected light. In her interview for the laserdisc linear notes, Chiho Saito, the writer of the Revolutionary Girl Utena manga that ran simultaneously with the anime, commented on the differences between the two media, saying “[…] the way the anime is structured, Utena is far too removed from the center of the drama, and I’m just really not sure that’s suited for manga” [1]. In the first episode, Utena wins Anthy, her princess, and thus becomes an obstacle standing in between the rest of the characters and their respective goals.

In this sense, Saito’s statement is both somewhat correct and somewhat in error—the main story arcs that make up the majority of Utena focus the internal drama of other characters, but Utena is the mirror which they all visit, in which their particular flaws, weaknesses, and wounds are reflected. Storyboard artist Katsuyo Hashimoto notes, “The special people [at Ohtori Academy] are ‘special’ because they lack something” [2]. In contrast to the emptiness that defines the lives of other duelists—whether that be Miki’s “shining thing,” Jury’s unrequited love, or Touga’s desire for power—Utena appears preternaturally fulfilled. Where then can her journey as protagonist take her? She is already complete, or at least maintains an illusion of completeness. She illuminates the where other characters must grow, rather than growing herself. Thus, she does indeed stand at the center of the drama.

The irony, of course, is that Utena’s holistic persona is predicated on more than just the inherent nobility that has defined her since her childhood. “Little one, who bears up alone in such great sorrow, never lose that strength or nobility, even when you grow up”, says the prince of her memories in episode 1. The particular phrasing of the prince’s instructions indicate an important unity between Utena’s youthful innocence and her nobility. Even the grown Utena of the main timeline sustains codependent obliviousness and honor—her ideals place her in unique positions of ignorance. For example, immediately before Utena ascends the stairs to the Dueling Arena for the first time in episode 1, the Shadow Play Girls call out, “But, be careful, brave hero. There are rules in the forest. Do you know what they are?” Indeed, for the bulk of the show, Utena the protagonist has no idea what she is doing; she is blown about by the winds of her own idealistic passion within the (to her) invisible structures of the narrative. And so, when she initially wins Anthy in the duel, it is against her will and tangential to her idiosyncratic intentions as an actor in the story. 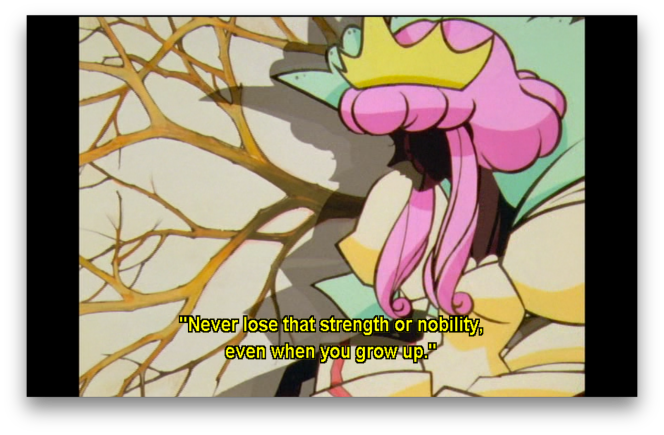 If Utena were a traditional story of revolution, Utena would be taking action to tear down the dueling game she despises, but the very structure of the narrative elements forces her into a position where agent challengers must bring the fight to her. In other words, Utena the protagonist is dependent on the motivations of the other “special” characters to present her with obstacles for her to overcome (while she simultaneously exists as an obstacle for those characters). With every duel she wins, Utena perpetuates a dramatic situation in which she must wait for the next obstacle to encounter her on its own path. Utena is the constant; it is around her existence, rather than her actions, that the drama centers.

Yet there is no denying that Utena is the protagonist of the story, the heroine, the hero, the prince, and the main character—from the anime’s very title, Revolutionary Girl Utena, this much is explicitly clear. This is also not to say that Utena is completely passive throughout the show, only that the avenues through which she takes action are usually untraditional for the protagonist of a fictional story.

Because of this, when Utena does take back agency in the narrative, those moments of action take on greater significance. At the conclusion of each of the anime’s arcs, Utena moves with the intention to change something. With the ending of the Student Council Saga she challenges Touga to repossess Anthy, in the finale of the Black Rose Saga she challenges Mikage to halt his machinations with the other students, and at the resolution of the Apocalypse Sage (and the entire show) she stands in Akio’s way to save Anthy once and for all. Crucially, each of these actions occur at the conclusion of their respective arcs—meaning that when Utena the protagonist takes action, the very story of Revolutionary Girl Utena changes. 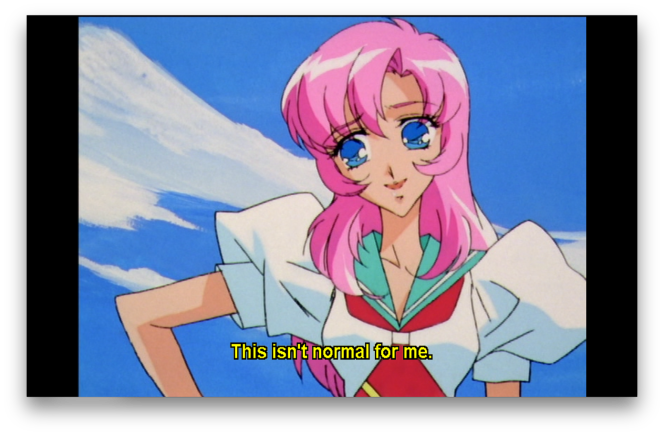 In this way, Utena redefines what it means to be the protagonist of a story—to be the main character, to be the protagonist, is not to drive the action of a story, but to instigate change. Functionally, the moments in which Utena possess agency are the moments when the story shifts between acts—her actions may not be the main source of each episode’s drama, but when Utena moves, the story moves with her. Furthermore, it is through encountering Utena that the other characters are able to progress through their own arcs. It is Utena who shapes the entire story by her presence, whether she is acting or not.

2 thoughts on “Revolutionary Girl Utena: Reflections on the Protagonist”