This is the second in a series of three posts reflecting on the various roles of Utena Tenjou, the titular character of Revolutionary Girl Utena. These posts are adapted from an academic paper I wrote in Fall 2014. These posts assume the reader has completed the anime and thus contain spoilers. Citations will be noted in footnotes at the bottom of the piece.

I am of the opinion that Utena’s unique role as the hero is directly related to her unique role as protagonist—not only does being the protagonist set her up as the de facto hero of the story in a traditional sense, but her unique place in the narrative paves the way for a reimagining of what it means to be a hero. 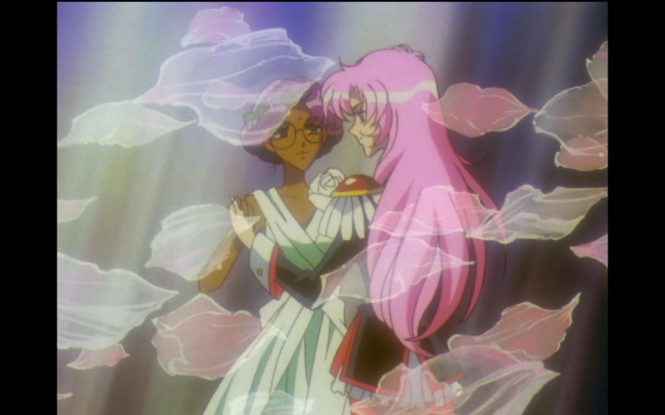 Of course Utena shapes the story—after all, she is the hero of the story, the prince who ultimately saves the damsel in distress, who reaches out for and grasps “something eternal.” In the context of Revolutionary Girl Utena, hero and prince are, effectively, synonymous terms. The prince of Utena’s memories tenderly reaches out to her younger self and saves the child from despair: an undeniably heroic action. It is to this action that Utena responds and because of it “the princess vowed to become a prince herself one day.” The questions the show deals with thus become: What does it mean to be a prince? And can a girl become a prince?

Catherine E. Bailey suggests that Utena, by maintaining her female nature alongside her princely aspirations and behaviors, modifies the traditional conception of the prince: “The ‘prince’ becomes, then, a body of ideas, connoting a heroic agency that is unfixed from gender” [1]. In other words, there is no longer a need for the distinction between hero and heroine, prince and princess—heroism depends on factors other than gender. For Director Kunihiko Ikuhara, the defining trait of the prince is the ability to assert power:

A prince isn’t ‘someone who looks cool’; nor, of course, is a prince ‘a girl who dresses as a boy.

A ‘prince’ is ‘someone who can exercise power.’

The title of episode 12, on which Ikuhara is commenting, may hold a clue indicating to which end a prince’s power ought to be directed: “For Friendship, Perhaps.” But is it enough for a prince to merely wield power for friendship? Is that all that being a hero means? 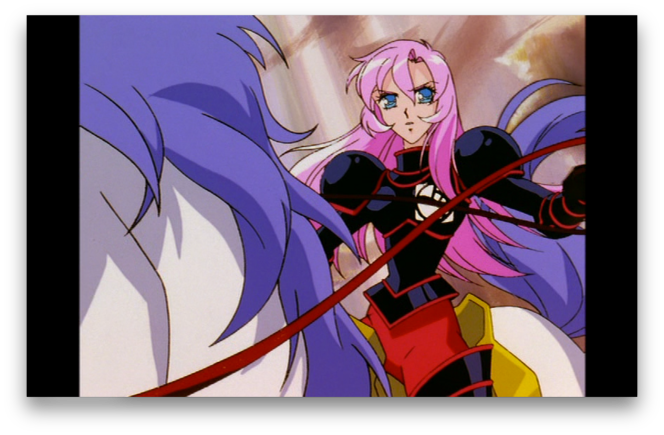 The oft-repeated story of Utena’s childhood encounter with the prince reveals the twin cores of heroism to Utena herself, and to the audience: strength and, more importantly, nobility. Less explicitly, the events of the final episode contrast competing heroic ideologies, and it is Utena’s actions (and the result thereof) that dictate the true form of heroic status. At the start of the episode, Anthy stabs Utena in the back, telling her, “You can never be my prince. Because you’re a girl.” But Dios, to whom Anthy returns the Sword of Revolution, is unable to become a true prince himself, unable to reclaim the power that lies through on the other side of the gate. “Without power,” he muses in the show’s final episode, “you’re doomed to live life dependent on another.”

This is how Akio sees heroism: as possessing the power to save others (and those who must be saved can never be heroes). And yet he fails, because he seeks power outside of himself. Utena, though, embodies another form of power, a strength that does not merely save the powerless, but instead restores power to them. Timothy Perper and Martha Cornog observe, “Although Utena cannot rescue Anthy, Utena’s gentleness—her noble heart—opens the Way for Anthy to escape” [3]. Rather than sacrificing Anthy to gain power as Akio has done time and time again (and the hypocrisy of sacrificing the one who needs to be saved for the purpose of gain the power to save them ought to be evident), Utena presents herself as the sacrifice to the Swords of Humanity’s Hatred, releasing Anthy from the her painful destiny as the Rose Bride. Patrick Drazen’s interpretation of Utena’s fate displays a fundamental misunderstanding of Utena’s action: “Plain and simple: a girl cannot be a prince. […] If she tries to be what she’s not, there’ll be a price to pay” [4]. Has Utena been punished? Only as far as she herself has chosen to become a sacrifice—indeed it seems nearly crass to dismiss her selfless act as “punishment.” As Anthy slips out of Utena’s grasp, Utena mourns that she “couldn’t be a prince,” but Anthy’s final lines of the show indicate that, thanks to Utena, she now has agency she never had before—she is independent and free. Thus, despite the fact that Utena feels she has failed, she has become the hero—her nobility has freed Anthy and Akio’s power has not.

In opposing Akio, the former prince, Utena redefines the state of being a hero by succeeding in her goal through sacrifice, not power. If Akio represents the traditional hero—male, proud, absolutely confident and certain in his purpose, willing to use violence to achieve his heroic ends—then Utena comes to be an incarnation of a new, beautiful heroism. She rejects Akio’s quest for an external power and exercises the power inherent within herself (her nobility of spirit) to take Anthy’s place and free her friend. By doing so, Utena liberates the concept of the hero-prince from the trappings of gendered qualifications and asserts that the capacity to be princely and heroic is naturally derived from nobility of spirit and strength of character. 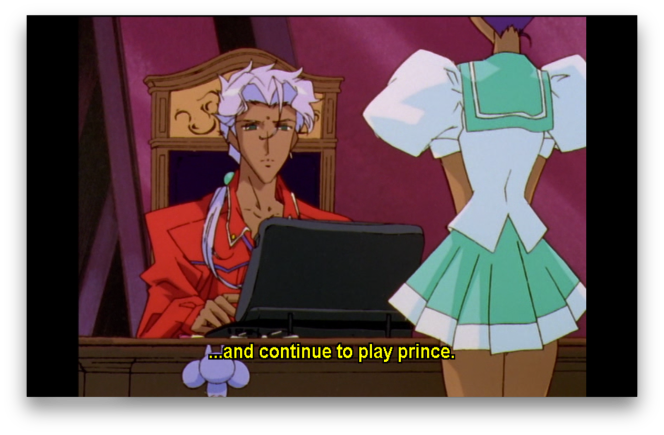 (There is also much that can be said of the redemptive power manifested by Utena’s return to her heroic nature following Akio’s seduction. Many heroes are required to be “perfect” by nature of being a hero, but Utena’s fall and subsequent persistence claims a heroism stronger than human faults. Utena condemns absolute judgement on the basis of a single sin—the complexity of the goodness of human beings cannot be so easily erased.)

One thought on “Revolutionary Girl Utena: Reflections on the Hero”