Well, that’s another week in the books! If I’m being honest, I sort of felt like this was a weaker week in general, although being as busy as I was makes it a bit harder to pin that on the episodes themselves—a lot of time my mental state when watching has a big effect on how I feel about stuff.

This is also just a note that I’ll be gone this upcoming weekend leading a retreat, so after the KimiUso post tomorrow (and maybe some pictures of some new stuff I got on Friday), I’ll be gone until next Tuesday. After that, I’m hoping my schedule will start to be less crazy so I can crank out some of the posts I’ve had on the backburner for a while. Until then, cheers~!

Your Lie in April, Episode 16: This whole “too many narrative threads” issue is still looming over this show, but KimiUso was at least more focused this week.

Akatsuki no Yona, Episode 18: Yona spent a fair amount of time this episode going over things we already know, but it was still pretty entertaining in the comedy moments.

Shirobako, Episode 17: Time for the inaugural Best Girl of the Season gallery, featuring Aoi Miyamori! I was sitting in my chair, watching this episode like normal, when I realized something.

Now, while this little outburst (there was more than just that one tweet) about “being in love” was somewhat tongue in cheek, it did get me thinking about some interesting tangents regarding waifus and best girls and stuff. But I want to spend this space talking about why Aoi is Best Girl of the Season and probably one of my all-time favorite characters. Aoi Miyamori, simply, is the type of person I would actually want to date in real life: responsible, thoughtful, hard-working, dedicated, and kind. And she’s an adult. This is no high school girl; this is an adult being good at being an adult. And that’s like…an incredibly rare find in this medium. More next week.

Garo, Episode 17: I’m pissed. Really pissed. There are a couple ways I could go about this, including a rant about how the “lover dies to push protagonist forward” cliché is stupid and maybe even kind of toxic or spitting at the agressively misleading ED animation or how the episode was offensively well-executed or how I even wished for an Aldnoah.Zero-style absurd revival. But overall I just hate the Garo decided to kill Lara off and that apparently is going to be the kick to get Leòn back into freaking hero mode. He was fine where he was! There was nothing wrong with the way he was living! No reason for him to go back to being a Makai Knight! And, anyways, she didn’t have to die for him to go to that anyways! Whatever. I’m basically just looking for any mud I can sling right now to justify my unhappiness with this choice. I don’t think I’ll ragequit like I threatened I would if Lara died, but if Lara gets forgotten in 2-3 episodes and Leòn just goes back to being a Makai Knight, Garo will really earn my wrath. 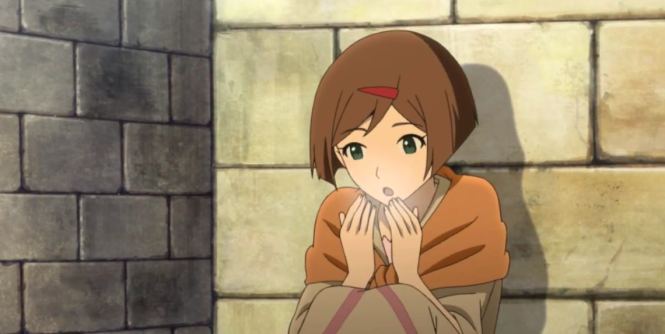 Death Parade, Episode 5: Mmm, that was some slick action this episode. I dunno if I can really say that Death Parade has the best production values of any other show this season, but it’s certainly near the very top of the list. Obviously, the visuals were the standout player for this episode, but I actually found myself really digging the OST. With the OP as good as it is, I think it’s easy to focus on that when talking about the show’s music, but the OST is a sweet mix of urban and jazzy sounds—and Death Parade really likes to use them in good spots, like moving from a chilled out piece during Decim and Ginti’s conversation into an upbeat, jazzy groove for their fight. As far as the plot goes, I’m not all that interested in theorizing on the details of Quin’s suspended judgement, God’s absence, or all the people dying on earth. For that, I’m just happy to let it all play out and enjoy the ride.

Durarara!! x2, Episode 5: The pacing this episode felt a tad bit off to me, but after as much time as I’ve spent with this show, I’m at the point where I’m pretty much willing to overlook technical flaws as long as good stuff is happening. And yes, good stuff is happening. Of top interest to me (because it involves my favorite character) is Kida’s warning to Mikado. It’s not really clear to me how much involvement/power Mikado still has with the Dollars, but he’s obviously still the same type of person he was in the first season—one who craves the suspense of a moving world. Mikado’s obviously still somehow in tune with the state of Ikebukuro, and Anri will inevitably get caught up in whatever craziness is about  to unfold. In other words, all three of these kids are going to be in the middle of the mess that’s about to unfold. I know some people don’t like the high school trio, but I’ve always found the juxtaposition of their age and the danger of the city to be quite fascinating. I’m quite eager to see what they’ll do in the weeks to come.