Yup, so that’s it. It’s finally confirmed (shocking…truth…) that Kaori doesn’t have much time before she dies. Yet, in true KimiUso fashion, we get a few really great scenes dealing with this new reality and then we breeze on back to the tried-and- nope still bad tonal whiplash techniques that we’ve been dealing with for 17 whole episodes. Frankly, I have to admire how consistently frustrating this show is to watch as it insists on horrid juxtapositions of great scenes and bad ones. Such is the KimiUso way. So, we kick off the episode with Kaori (predictably) retracting her chilling proposal of a double suicide, but the scene still set the tone for the entire episode: dark. Time to deal with the reality of Kaori’s condition and the impact the news of her impending death is going to have on Kousei. Orrrrr not.

So, once again, KimiUso demonstrates its total lack of sensitivity to its character’s respective arcs by pushing on from Kousei’s very realistic and natural distress over Kaori’s revelation into an internally great scene with Tsubaki on the basketball court. Tsubaki is showing some real growth in her own self-awareness, presumably acquired since her decision to stop clinging to an idealized past, with the scene cleverly staged on the basketball court—an athletic arena where Tsubaki feels the most at ease. After missing twice as she winds through a series of reflections on her own feelings (during which we discover that she’s working to get into a school closer to Kousei), she hits the final shot in her moment of honesty. It’s a lovely scene, including a very pretty sequence of cuts as she prepares to take the final shot, but… 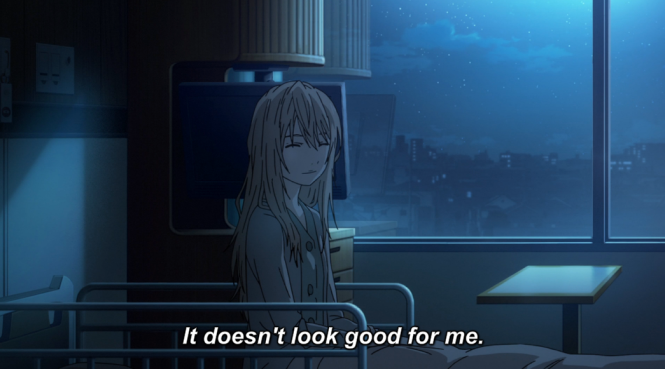 …we’re getting all of this on the heels of the news that Kaori is dying. She’s dying, Kousei’s in the middle of dealing with the heaviness of that news, and we get a Tsubaki scene. Not only is this unfair to Best Girl Tsubaki’s arc (after all, how are we supposed to give the angst of a 14 year-old girl the same emotional engagement as the death of a 14 year-old girl?), but it creates narrative (and therefore emotional) distance from what’s supposedly the main conflict of this episode—if the opening scene was to be believed. We have to suspend the distress caused by the Kaori scene and wait to return to it while simultaneously reengaging with Tsubaki’s arc…which we haven’t touched in 2 episodes. Furthermore, by following up the Kaori scene with the Tsubaki scene, it’s somewhat implied that these two moments have the same narrative gravity. Which, as much as I love Tsubaki, they really shouldn’t.

But, guys! The Tsubaki scene was really good! I loved it! But the structure here forces me to be conflicted about it, when all I want to do is enjoy it. Then, of course, we proceed back to Kousei—except now he’s at Hiroko’s doing a lesson (and getting smacked over the head for playing poorly). Now, for whatever reason, we get a sound bridge—the basketball going through the net/Hiroko’s slap—from Tsubaki’s scene into Kousei’s. Why are we connecting these two moments sonically? They have absolutely nothing to do with each other! Just a final, annoying footnote to a poorly placed good scene.

Now, it looks like we’re going to get to see Kousei dealing with his pain, but nope—this is actually a Nagi scene, complete with her internal monologue and flashbacks! Now, don’t get me wrong. I’ve really come to love Nagi in these past two episodes. She’s definitely one of my top three favorite characters in the show (Emi and Tsubaki, of course, being the other two), but it’s a baffling decision to focus on a scene that sort of ends being healing for both of them through Nagi’s perspective. Kousei is giving Nagi advice, drawn from his experience with Kaori, but he’s talking like someone who has already come to terms with her death.

Which…you know, he hasn’t, as we see in the next scene with Watari. Again, on its own, this scene is really great. Of course Kousei wouldn’t want to go see Kaori again right after that! Of course he wouldn’t know what to say, how to act, or even how to feel! This is a perfect expression of a particular reaction to impending death—sheer uncertainty of how to react—given words in Kousei’s agonized, “What could I have said to her?” Death is the great known unknown of human life. Confronting it, we are so very often left without the words to say to express our feelings on the gateway to the most hidden part of our existences. And for a 14 year-old boy to have to relive this uncertainty twice with two people he dearly loves? What could he say to himself, or to her? How can he express his grief and his bitterness and his sorrow?

The following scene with Kaori is well-done, too. Despite Kaori’s desire to be remembered, her fear of causing other people pain is even stronger, causing her to suggest the impossible to Kousei: just forget about everything. Here, I think the jump into the comedy (while still inappropriate, I mean, really) actually worked well with Kousei lighting off on Kaori. Not only does it relieve the tension, but it symbolizes a reversion to their prior relationship: Kousei will not forget. Instead, he’ll do the hard thing and keep on remembering what it’s like to be Kaori’s friend.

And the show’s solution to that…is to now bundle Nagi’s arc into Kousei’s quest to do something for Kaori? And in a comedy scene that completely undermines the gravitas and significance of the gesture? And in a montage of Nagi and Kousei preparing for her school’s festival that skips over any sort of intermittent emotional shockwaves Kousei might possibly, just maybe, be dealing with? I mean, heck, for him this is a reliving of his mother’s passing away and we’re spending that time breezing through their preparation? And again, the individual pieces are are really great! We get a properly used sound bridge in the form of continuing background music from Nagi crying at the piano to the scene with her and Hiroko in the bathroom—linking the emotional logic of the practice montage’s end to the continuation of Nagi’s feelings four days before the festival. Both Nagi’s struggle with the simultaneous weight of huge expectations and Hiroko’s reimagining of her as another Kousei are powerful moments (although it seems a bit incongruous to compare Kousei’s extreme situation to Nagi’s self-inflicted one), and the small detail of having Koharu sit behind Hiroko as she comforts Nagi is a nice one, giving the scene just another bit of warmth and Hiroko shows that she is far from a failure as an instructor.

And the scene with Nagi and Kousei backstage, while somewhat less elegant than similar scenes we’ve had in this show, was good, too (aside from the (1) horribly (2) timed (3) comedy too lazy to even try maintain actual continuity). Nagi once again displays a disproportionate amount of self-awareness for her age—”But I’ve only lived for thirteen years…”—and it’s great to see Kousei supporting Nagi the same way Kaori once did for him, but at the very end of the episode we get two shots with Kaori, reminding us who Kousei is really doing this for. Which is, again, totally unfair to Nagi and, anyways, the connection between Kousei’s performance at the festival and his desire to do something for Kaori is understated to the point of almost being incomprehensible.

In the end, this is really just more of the same KimiUso that I’ve grown used to—a collection of solid pieces ranging from very good to great hampered by dreadful structure, incredible fits of tonal mismanagement, and tons of narrative threads that get misplaced or unjustly bundled into other stories. Despite that, the pieces are strong enough on their own, but it’s always hard pill to swallow when your favorite characters’ scenes are being poorly treated.

At once infuriating and engaging; that’s Your Lie in April all right.