But iblessall, you’re a week late! Hush, hush, I can do my midseason report whenever I feel like it! Also, shows are all over the place in terms of episode count this season, so this is as good a time as any (plus 13 doesn’t divide in half evenly anyways). Anyways, there are the anime I’m watching and what I think about them so far. Scores are a projected range for the final score of the show. Man, this is a good show. Not a lot has changed with Shirobako since I wrote up my thoughts on the show midway through the first cour, but nothing really needed to change. This is just a show that lives in the perfect spot between realism and optimism for me. Frankly, if Shirobako was preaching the hopelessness of adult life, I would have quit it long ago—and I think I would have been equally disillusioned with the show if it was unflinchingly positive at all times. Instead, primarily through the lens of the ethereally, transcendently grounded Aoi Miyamori (but also through the rest of the cast), Shirobako tackles the real world with a can-do attitude that accepts the difficulties of life without ever fully caving to them. I really couldn’t ask for anything more.

Episode 19: Ookura-san provided the knockout moment in an episode filled with them (like the creators of Andes Chucky speaking about the future through the characters of their show), with his incredibly sage advice—advice it wouldn’t go amiss for any young, aspiring professional to hear: just moving forward can be a good thing on its own.

While Death Parade definitely will need to have a strong finale to make its way up to an 8/10, the impressive diversity of its episodes is certainly a huge mark in its favor. Death Parade certainly has some interesting things to say about death and judgement and how we assess the lives of human beings, but it’s tough to say at this point what its final statements will be—in fact, given the ambiguity we’re often dealing with during the judgements, who knows if Death Parade will make take a definitive stance at all? I suspect it will, though. Decim and Kurokami have both proved to be very likable leads (especially Kurokami—I have a weak spot for cheerful people with a strong sense of fairness), but the rest of the cast is varied and fun to watch on their own terms.

Episode 7: More interesting world building, but of most interest to me is the fact that the Kurokami x Decim ship has somehow morphed into a Dead Girl x Doll Imbued with Human Emotions ship. It also seems like Nona’s dissatisfied with the way the “business” of judging the dead is run—and it is a business, from exhausted grunts doing a half-hearted job to an annoying CEO unwilling to change his business model.

It was only a few weeks back that I thought Akatsuki no Yona was pretty much a lock for an 8/10, but I can’t really say it’s had a truly good episode since the end of the Blue Dragon arc, which has been about five episodes—and 8/10 shows just don’t have droughts like that. This isn’t to say that recent episodes have been entirely terrible or that the prior material wasn’t actually all that good, but I had some serious expectations for the quality of Yona after I started blogging it in earnest and those expectations haven’t been meet as consistently as I would’ve liked. I still think Yona is a much better show that people give it credit for, but I’m not quite as high on it as I used to be. But we’ll see how the final four episodes go. There’s plenty of time for a spectacular finale to bring Yona back into my good graces. 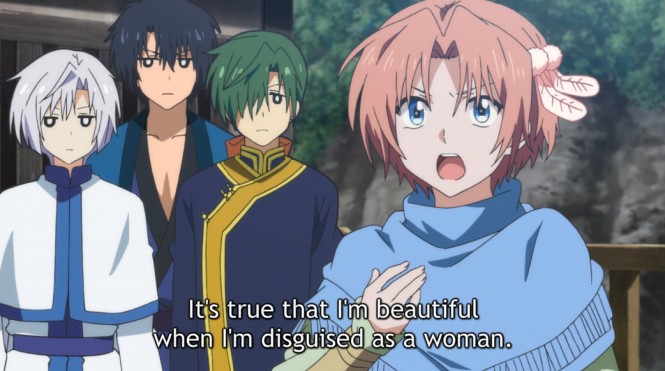 It’s had some crazy ups and some disappointing downs, but Garo‘s last three episodes have probably been the best run the show has had over the course of its entire run. And that’s not to say that Garo hasn’t had other great moments (it certainly has). It’s just that the show has occasionally gotten bogged down in slower side-stories that didn’t seem to make much of a difference on the overall movement of the narrative. But, really, thinking back on the show as a whole, Garo‘s had a lot more great moments than average moments and very few actively bad moments. Plus, with MAPPA displaying an unprecedented variation of craft, Garo has one of the best dark visual aesthetics I’ve ever seen and makes brilliant use of it.

Episode 19: Lacked the sheer sakuga power of last episode, but made up for it with beautiful color work, intentional cinematography, and a story about Ema that paralleled Leon’s own journey. The final scene of the episode is unquestionably the outcome of two deeply wounded people seeking solace in the other’s pain—it’s not a healthy way to deal with your hurt, but it’s certainly understandable in a sad way. (See this tweet and that tweet for more gushing.)

Very much the same kind of show it was five years ago, although Durarara!! x2 feels a bit like it has started to carve out its own path as of late. While the original series was certainly no example of how to tell a tightly focused story, the current iteration feels like it’s expanding out even further than before, with touch points in Russia, with the Ikebukuro gangs, and media conglomerates. So far it hasn’t been a problem, but I do somewhat fear that the vastness of the impending conflicts might have the potential to swallow up Durarara!!‘s greatest assets: it’s characters. The cast we grew to love in the first season was big enough that we never really got to explore any of them fully, so I’d prefer Durarara!! x2 to spend more time with the characters we already know than with the new ones. 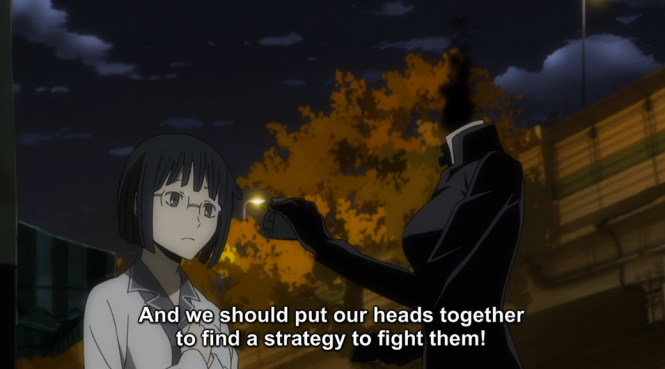 Episode 7: Yes, the animation was atrocious (a real shame given the first season’s generally solid production values), but there are still interesting things going on here—most notably Izaya’s manipulation of the ever-naive Mikado. Also glad to see Anri back in action and at Celty’s side. They make a good team.

Wildly, frustratingly, gloriously inconsistent and a whole heckuva a lot of fun to write about every week. Without fail, KimiUso gives me something to rant about each week and something to love each week. It’s certainly not the show I had hoped it would be, but I think it’s evolved in some interesting ways since I wrote my post on whether or not it was okay to like the show. By this point in the game, I’m committed to seeing this thing through, no matter how much pain or frustration it may cause me. The Good Things about KimiUso are very good indeed; it’s just a same the show’s overall craftsmanship can’t keep things rolling along well in between the big moments.

Basically the exact same show it was in the first season, which is truly all I wanted it to be. It has its great moments and its very, very average moments, but overall I think I’ve maybe liked Log Horizon 2 a little bit more than its predecessor? The biggest fault of the first season was the absolute bog that was the political “games” arc, but Log Horizon 2 has generally kept its arcs shorter (or at least has done a nice job of keeping multiple arcs running at the same time). Plus, the expanding experiences of the world and the increasing contact with forces outside of Akihabara have given the show a sense of scale I somewhat felt it lacked before.

Episode 20: Nice to see Nyanta in action and actually get to hear more from him than we normally do in his supporting character role. It can be easy to forget how well-connected the adult members of Shiroe’s guild are, which makes the contrast between the Tea Party members’ respective responses to the world all the more interesting.

When it’s good, it’s so good and so fun! But it’s not always that, and therein lies the rub. Back in the good old days when I was first getting into anime, things were either so new and excited that I didn’t notice or I was just getting lucky by hitting a lot of good shows, but ever since I started watching simulcasted shows I’ve come to realize that consistency is the long-lost prize that most anime struggle with. And I don’t mean animation quality (although Rolling☆Girls certainly has its issues with consistency there, but that’s more to be expected). Rather, I’m referring to how engaging the story is. Rolling☆Girls has proven, especially with its latest episode, that it’s capable of doing the itinerant moegirls bit effectively, but the fact is that it doesn’t actually do that every episode. Which is a shame. I’d love to love this show, but facts are that I just kind of like it right now.

Episode 7: Probably the best episode we’ve gotten from the show since episode 2. There was some comedy, some character work (finally) with our four leads, more zany action and cool colors. Even a bit of conflict that has some teeth to it. Yay, yay, yay! Very excited for the next episode!

Has had some really solid episodes (1, 3) and some not very good episodes (2, 4), but the sum total of Assassination Classroom is that it is a very, very likable show. This is essentially just an underdog story, although who exactly the underdog is feels like a bit of an unanswered question due to the general lack of depth for the students of the E-Class. Koro-sensei, of course, is a magnetic presence and even Irina and Karasuma fit in nicely to the cast. I just wish we were getting more about the students themselves than half-episode side-stories, but I guess that’s to be expected when the real draw of the show is obviously supposed to be the tentacled alien.

Episode 6: So, we get a different kind of antagonist to play games with and it actually does a whole lot of good for Assassination Classroom. I like have an oppositional force from outside the classroom around the increase E-Class unity. Also very much appreciated the depiction of the test questions as monsters—it was both true to life and quite funny.

This is pretty much classic 5/10 territory that Absolute Duo is running in: archetypal characters with just enough energy to make them enjoyable, some silliness to the plot, a surprisingly decent sense of humor on the good side—some inherent sexism and crass fanservice on the bad side. As weird as it might sound, this is the kind of show I watched a lot of when I was first getting into anime, so Absolute Duo is working on an odd level of nostalgia for me. There’s nothing particularly great about the show to recommend it, but all of its problems seems to derive from generally benevolent intentions, which I can appreciate. It also has never failed to generate at least one genuine laugh for me an episode, something I deeply appreciate and something many actual comedies have failed to do. 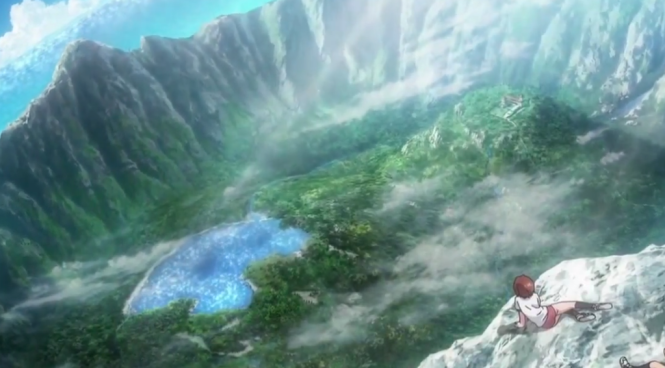 Episode 8: Probably the most ambivalent I’ve felt about an Absolute Duo episode yet, thanks to the copious, unrestained fanservice and the surprisingly well-managed scenes between Miyabi and Thor. Godkiller Unit Rebels (whaaaaat) next episode!