Hey, this was a pretty darn good week for my anime! Durarara!! x2, Rolling Girls, and Absolute Duo all had great episodes, Yona finally got back on track, and the old standbys of Shirobako and Your Lie in April were their normal selves. I’m so down with things being this way.

Your Lie in April, Episode 19: Just trying to be thankful for what we have…

Akatsuki no Yona, Episode 21: Back to form this week!

Shirobako, Episode 20: Obviously, Hiraoka was the big news story out of Shirobako, what with the whole getting in a fight with Madoka-san thing…which, of course, made him Tarou’s hero because Tarou is an idiot, but what else is new? Actually, I just rewatched Tarou’s reaction with Hiraoka comes back to the desk and…yeah. He’s an idiot. It was pretty cool to see the president sit down with Hiraoka, though, and talk to him about what had just happened, rather than firing him outright. Looks like Hiraoka isn’t quite as content with his halfway work ethic as he lets on, if Madoka’s criticisms can rattle him like that. He’s lost the dream that Aoi has, but it seems he still wishes he had it. He’s just been through too much in the business to still have faith. Which is why I love Aoi so much; Aoi, who finds purpose through Aria in the ability to support others in their dreams, even if she isn’t quite sure about her own yet. Love her.

Durarara!! x2, Episode 8: See, this is why—this bloody episode is why I can’t quit this show despite the pain of waiting a week and despite weeks where the animation goes down the drain. Because when Durarara!! really starts rolling, there are few shows that can really keep up with the sheer kinetics of people moving, making decisions, taking action, and clashing with each other. Sure, the production values aren’t what they were in the first season (although the background art caught really caught my eye with some beautiful pictures this week), but even lackluster animation can’t entirely pin down the energy of a brewing conflict. The final shot of this episode, Izaya walking out of his dark room into the light, like a hero (good joke, Durarara!!) kind of sums up the feeling of anticipation I have for the incoming episodes of this show. There’s no doubt it was Izaya who’s been pulling the strings all along and it’s finally time to see where everyone is hanging.

Rolling☆Girls, Episode 8: Episode of the Week! Oh, man, was that everything I ever wanted from this show or what? This was definitely my favorite episode of the week. The combination of explosions, friendship, positive emotions, and music were very much reminiscent of AKB0048‘s best moments, which is a very, very good place to go with any show. I do enjoy that there are a few more connections showing up in the larger plot (like Chiaya’s mother’s lackey being a former member of Momi-Ham), but the immediate conflict between the two Kyoto leaders reviving their friendship was resolved satisfactorily and with great style. Throw in the fantastic insert song “Stones” and you’ve got the formula for the best episode of the week. Extra shout out to the scenes at the river, which were quietly my second-favorite part of the episode. 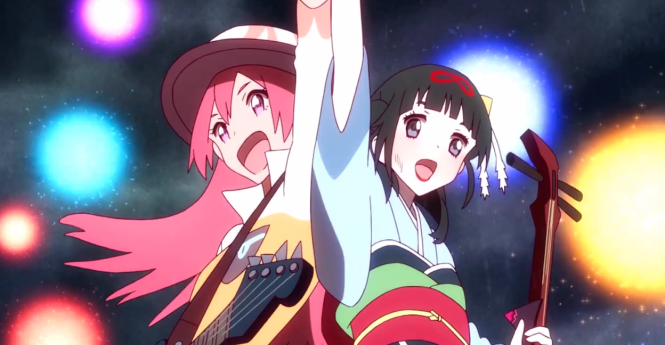 Absolute Duo, Episode 9: Hell, yeah, Absolute Duo staying strong as one of the most consistently entertaining shows on my schedule. Major, major props to the team working on this adaptation, because everything about this episode (as with most episode of Absolute Duo) was incredibly tropey, but the spirit of the execution and the authenticity of its character moments really sold what could have been an utter wreck of clichés and mailed-in dialogue. Instead, we got Julie protecting Tor as much as he protected her and Tor literally protecting Julie with his own body in a way that transcended the potentially sexist implications of his attitudes towards her to the point of demonstrating genuine friendship and loyalty. The presentation of those moments has a lot to do with it. Tor isn’t glorified or shown as a hero when he grabs K’s knife to save Julie life. Instead, the camera focuses on his bleeding hand and the action moves on. It’s just one moment in a longer battle, an expected action from a teammate. So, yeah, you go Absolute Duo. Keep it up!

Death Parade, Episode 8: I won’t have too much to say about this one until we see how all the threads wrap up next week, but the chilling moment of the week came from Decim’s emotionless pronunciation that “everyone can be judged.”

Garo, Episode 20: Umm…so are we just totally forgetting about the thing that happened at the end of last episode for the sake of plot?

Assassination Classroom, Episode 7: Continues to be solidly entertaining, although I would have liked to see Karma and Nagisa in action more than Koro-sensei, but whatever…