Man, we are just racing through things at this point—and with only two episodes, for good reason. We have to deal with the fallout of Tsubaki’s confession, confront Kaori’s impending death, and get in one more concert for Kousei before we’re done. And, frankly, that’s like the minimum of what KimiUso needs to accomplish. Let me just say that I do not envy the task of whoever’s writing this thing. This was basically another bisected episode, with the first half of the episode focusing on Tsubaki and the second half on the Kousei-Kaori dynamic. There was a lot of wheel-spinning in both, with Tsubaki retreading aspects of her relationship with Kousei we’ve already seen and with Kousei and Kaori still playing their hot & cold game right up until the very end. The most important scenes we got this week hit right at the end of each section: Tsubaki’s confession and Kaori’s (what looked like a) seizure. Which isn’t actually too bad a way to structure an episode, but it kind of hurt to be rehashing stuff we’d already seen before we actually got to the blockbuster moments.

The whole cat symbology has been kind of abused over the course of KimiUso‘s run—first the cat was a symbol of his regret over his relationship with his mother and also a personification of his ongoing guilt, now it’s more or less a 1:1 metaphor for Kaori—so it was pretty darn interesting to see the two disparate uses come together in a single episode. I’d like to think bringing the cat back at the beginning of the first episode was a play at adding yet another level to the cat mythology of the show, with the cat also becoming a symbol for Kousei’s human soul—so that when the cat that is Kaori gets struck by the car is killed, it means Kousei’s soul is likewise crushed. But, really, I think that’s just my attempt to somehow join these divergent halves into a comprehensible whole. I’m don’t think KimiUso was really backing up my efforts. And, yes, I think it matters that KimiUso doesn’t pull these apparently parallel narratives together and, yes, I think not doing so detracts from the show’s overall impact by forcing us to disengage our emotional connection to one piece of the show before we can connect to the next. I’ve been honest over the course of the show that, of the main recurring characters, Tsubaki is my favorite, so it bummed me out again this week that her ongoing distress over her feelings for Kousei really didn’t—and can’t—have a resolution while Kaori is still in a liminal state between life and death.

Which makes all of the other good stuff KimiUso is doing on the Tsubaki side feel tragically pointless. If searching for the cat—Kousei’s human soul—is the unifying factor between the two parts of the episode, that symbol is still rooted in his relationship with Tsubaki. So, when we get shots of the cat between the two of them, it’s a reminder that Tsubaki was the person who helped Kousei understand that he wasn’t just a puppet. That’s some beautiful visual code use right there, but (and I’ve talked about this before) it gets co-opted by Kaori’s story to mean something else. In other words, we get that truly beautiful scene of Tsubaki and Kousei waiting together in the rain—the sound of rainwater light in the background, KimiUso‘s signature chill electronic-piano music playing, Tsubaki’s poetic reflections on their situation—but it ends up negated by the dramatic weight of Kaori’s situation.

It doesn’t help that Tsubaki went about her confession (and the immediate aftermath) in possibly the least likable way possible. Her running internal monologue of “Suffer! Suffer! Think just about me!” is fraught with selfishness and a total lack of the understanding she professes to have of Kousei. To be entirely honest, it felt a bit out of character to me. Tsubaki’s been bound to the past for a long time out of fear of change and, on the surface, she displays a lot of textbook tsundere traits, but for her to wish “harm” on Kousei feels too far. Again, a bummer, because there’s a nice kind of symmetry to her hitting the baseballs at the music room window using the same refrain we’ve seen the musicians use over and over again—”reach him, reach him.” In her own way, through the athletics where her talents reside, Tsubaki is trying to reach out to Kousei. That’s not the same was wanting him to suffer. Ah, well, did I really expect anything besides a bunch of nice set pieces rigged poorly together? Nope!

So, yeah, after that it was just some phone conversations between Kousei and Kaori—and the reframing of the cat as being equivalent to Kaori—before all the crap hit the fan. I actually really like that Watari doesn’t just bow out as soon as Kousei finally tells him that he likes Kaori. And Watari looks just as horrified as Kousei does to see Kaori in the midst of her seizure. But, of course, the big moments here are all about Kousei. The whole hand motif was a nice connection after seeing making Kaori’s hand the only thing Kousei can see as an indication of her condition (although it was pretty visually confusing to make the next shot after he reacts a cut of the nurse’s aggressive hand reaching out for him, as was the focus on his bloodstained hands after carrying the cat). The return of the cat symbol here wasn’t particularly subtle, but it worked well enough to parallel the absolute helplessness Kousei feels over Kaori’s situation. She’s dying and there’s nothing he can do. The cat was struck, but it was too late for him to do anything. Again, it’s a nice set piece, but it was a bit rough trying to parse what exactly we were supposed to be understanding about Kousei’s reaction. We see the classic anime blank eyes look before he sees the cat, then eyes wide with panic, then super tired eyes after the cat dies, followed by tears. I mean, get the progression well enough—shock, panic, exhaustion, realization—it’s just that they come so quickly and the sources of each emotion are blurred between the cat and Kaori. Which…I suppose is appropriate given the metaphor, but, again, there’s little nuance to this show and running one emotional path in between a literal and metaphorical situation (which is also physically happening) is just a project beyond KimiUso‘s abilities.

Anyways, sorry it’s all mostly complaining again this week. Believe me, I really do appreciate some of the individual scenes that KimiUso throws at us, but it’s just so difficult to maintain emotional continuity when we’re bouncing between repeated material and clumsy metaphor and hormones and the whole deal. Two episodes left; I can do this! 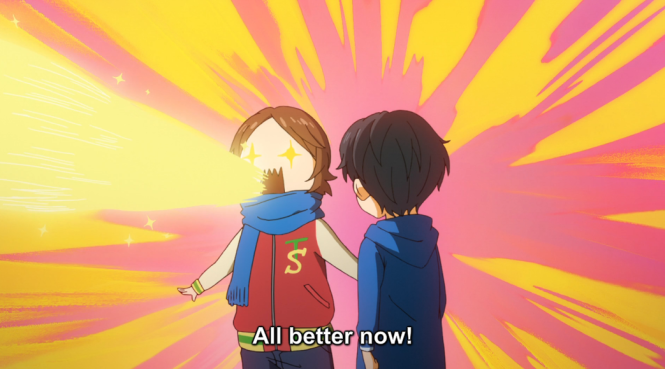