I suppose I can just betray my character bias right off the bat so no one accuses me of hiding it later: I think Makoto Sunakawa is being set up to enact one of the all-time great bro roles in anime history. I really do. Of course, that’s not all I came away with from this episode—which was delightful, by the way—but the relationship between Takeo and Suna has really been the big focus of these early episodes as Ore Monogatari!! works to build their characters. Rinko, I’m sure, will get her turn, but right now Ore Monogatari!! is all about the bromance. I mean, heck, the opening lines of this episode are, “My name is Takeo Gouda. He’s my friend, Sunakawa Makoto. I call him ‘Suna,'” before launching into a quick recap of their friendship backstory—and then we tumble into love. Bromance and romance. Can one truly exist without the other? In this show, it doesn’t seem like it. I make a big deal of this not only because Ore Monogatari!! spends almost a full half episode on Takeo and Suna’s relationships, but also because I think I think this relationship is going to be a really important one throughout the duration of the show. Honestly, I can’t believe that they’re going to stretch out Takeo and Rinko getting together over the full two cours and I full expect Sunakawa to play a big role in making that happen.

But, for now, it’s Takeo playing matchmaker in what’s sure some kind of endearing way. It says a lot about both Takeo and about his relationship with Suna that he only thinks about things on his own for a little bit before going straight to the good looking horse’s mouth. Takeo’s simply not a guy who worries or stews over things on his own—he’s an action-oriented guy, hyperactive as a kid, and kind of the same (if somewhat more restrained) as a teen. Of course, it helps that he apparently has no sense of social norms when dealing with Sunakawa, crowding his friend and busting into Suna’s room when he’s ready to know the answer. As we’ve already seen multiple times, though, it’s not that Takeo is just a nosy guy or that he has no respect for other people—clearly, he thinks about others a lot—so this really just expresses how comfortable his relationship with Sunakawa is, Sunakawa’s resigned, “Dude, you always say that after you’ve come in!” demonstrating that, for his part, he’s just as used to their relationship. The interesting thing about Takeo’s quiz of Sunakawa is how reluctant Sunakawa appears to be to talk about himself (although part of that is certainly due to Takeo’s enthusiasm dominating the conversation), quickly turning the conversation around to describe his observations about Takeo. It takes a trip out to the butt tree (/snickers like a fifth grader) for Takeo to really get anything out of Suna, but even then what Suna tells him is pretty limited: thinking about what he’d have to do dating a girl makes him tired, but he’s not disinterested in girls. That’s really not much of an explanation, but for the Takeo’s straightforward personality, all he needs to hear is that Suna is interested in girls—although that’s certainly an interpretation that’s bit filtered through his specific lens.

It really is interesting to watching things between these two play out, as Takeo’s horrified reaction to Suna’s explanation and later lecture on making girls fall for him reveal that there’s a pretty significant gap in the way these two high school guys think about romance and relationships. You kind of have to wonder if Suna’s ever really fallen for someone and what he would do if it were to happen. Contrasted with Takeo, who seems like he falls in love with girls on a pretty regular basis, Suna basically gives them impression that he doesn’t really think about girls that much, if at all. So what is going on inside his head, then? I’m pretty curious to find out. 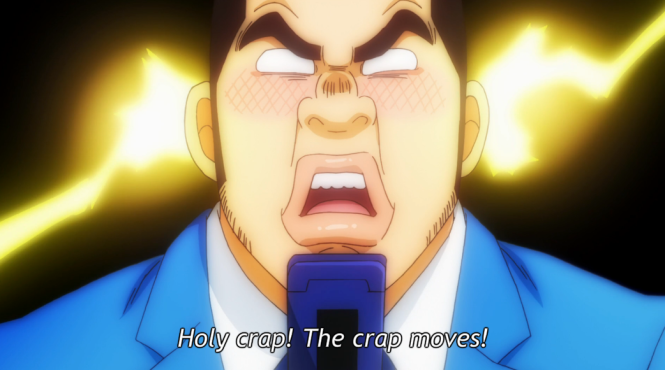 But what am I doing? I’ve spent half this post talking about two guys. You readers don’t care about that! You want adorkable romantic gyrations! Well, there were certainly plenty of those this episode, too. It’s pretty amusing to watch Takeo essentially involve himself in the opening stages of a romantic relationship without any clue of what’s going on (letting her call him by his first name, texting frequently, and of course the one-on-one date Rinko asks him for), but can you blame the guy? Every girl he’s ever liked has fallen for his best friend; he’s got absolutely no clue what it looks like when a girl likes him back. But, if there’s one person who does know what’s going on, it’s Rinko herself (and, at this point, probably Suna, too).

It’s really quite present to see a female protagonist in a romance anime has so much agency in the romance itself—it seems there are some people out there who have just taken Takeo’s interpretation as the truth, but I think it’s incredibly obvious that Takeo is the one Rinko likes. Sorry to burst your bubble if you thought she liked Suna. Anyways, I really appreciate that Rinko is being allowed by the story to essentially court Takeo. It’s nice not only because it keeps the narrative from getting bogged down in Takeo’s inaction, but also simply by the virtue of the fact that it’s extremely rare to see the girl pursue the guy. 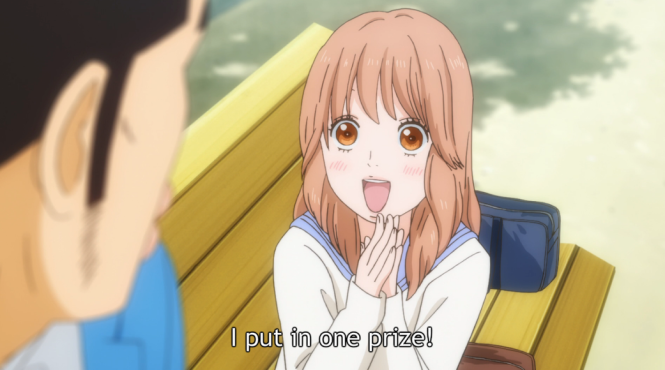 For all her cuteness, Rinko’s definitely got a lot of courage—after all, last episode she very definitively chose to join Takeo and Sunakawa as they took the groper to the police station, sought out Takeo’s address on her own, asked for Takeo’s phone number, and started initiating contact. This episode, we see her again “putting the moves on” Takeo (the chestnut prize was adorable), running back to help Takeo and Suna with the steel beam, and even making sure her next meeting with Takeo was just the two of them. Ore Monogatari!! really has struck a nice balance between Rinko making active choice to get closer to Takeo and still allowing her to be a nervous, somewhat bashful high school girl.

And so, with Rinko trying so hard, there’s almost a kind of tragedy in the way that Takeo is so stuck with his mental image of what a romance is supposed to look like. The whole falling beam thing felt pretty shoehorned in, but it was worth it to hear Takeo’s heartbreaking thoughts as the beam (and his feelings) slowly beat him down. Takeo has convinced himself that he needs to be the savior knight for Rinko, that to be “likable” he can’t be himself, can’t be the guy that rushes for the falling beam instead of for the girl. Instead, he tries to convince himself that it’s enough that she’s safe, trying to toss his own feelings to the side. And Rinko won’t let him do things his way! She’s fallen in love with him, so she’s doing everything she can to let him know that, short of just telling him outright. She bakes for him, puts a bandaid on his face, and (for me, this was the coolest thing she’s done yet) supports the beam with him. Who is really pursuing who in this story? To me, it looks very much like Rinko’s chasing after Takeo, not the other way around. That’s a pretty cool place Ore Monogatari!! to be going. I’d absolutely love to see Rinko crash through Takeo’s silly ideas about what romance has to look like and show him that he doesn’t have to be the knight in shining armor to be loved.