I’ve been thinking lately about the difference in my personal response to the first couple episode of Danmachi (aka Is it Wrong to Try to Pick Up Girls in a Dungeon?) from the reaction of the wider anime-watching public. If you’ve been pretty much anywhere online where discussion (or, in this case “discussion”) about anime happens, you’ve probably seen the Hestia fanart craze that blew up pretty much from the moment the first episode of Danmachi finished airing. The reason? Her, uh, unconventional method of supporting her breasts—known around the fandom as the “boob string.” But, for me, the blue ribbon encircling Hestia’s torso was never something that really caught my attention before the fanart craze and meme running started and I found myself actually a bit peeved by the intense focus on a relatively inconsequential element of a show I liked for other reasons. But why should this be so? 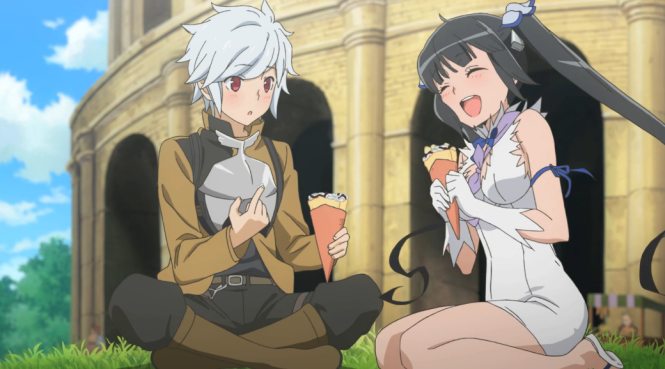 If you follow me on Twitter, you should be well-aware that I’ve been very outspoken from the beginning of Danmachi‘s airing about my feelings on the anime’s protagonist, Bell Cranel—specifically pertaining to his cute factor.

Bell is still the cutest character in #danmachi. By a lot. pic.twitter.com/aPIhKSHcjU

But, I assure you, there’s more a point to my campaigning for Bell’s moeboy status than just sharing the cute (although that’s certainly part of it). As someone who occasionally caves to the desire to oppose the crowd just for the sake of opposing the crowd, I think part of my pro-Bell rantings have been born out of a desire to create a sort of equalizing force against the massive power of the Hestia craze. I’m well aware it’s a futile endeavor, but I think it’s important because, as I see it, Danmachi is a lot more than just Hestia and her ridiculous attire. In fact, I’d argue that Bell’s presence in the anime is a critical part of what makes it such a charming experience for me.

To put things in the show’s terms, Bell is part of Hestia’s Familia, the name given to a god/goddess and the followers they’ve chosen to bless with their powers. In the context of Bell and Hestia’s relationship, it really is a perfect name. Despite all the romantic affectations we see from Hestia and Bell’s constant refrain of calling her “Goddess,” these two characters are a family: they both work every day to support each other, they offer each other emotional and practical support, and they’re both willing to do whatever they need to do to help the other. Bell seeks to get stronger, at the risk of his own life; Hestia humbles herself on a daily basis to keep food on the table.

And that’s the other part of this, the reason I’ve struck out on my campaign to get Bell recognized as a kid able to stand on equal ground with Hestia in moe power. When I watch both Bell and Hestia go about their respective adorkable attempts to support the other, dashing out of bars with hurt feelings or leaping around with joy when a knife is successful forged, I don’t see two typical teenage anime characters on the screen. Their naivety, innocence, and utter lack of guile reveal them to be exactly what they are—two kids trying to make it in this fantasy world. And I can’t help but root for them.

That’s why I can tolerate Bell’s patented shounen harem lines about “getting stronger” far more easily than I can with protagonists who have actual hints of self-awareness. It’s why I can tolerate the stupid boob jokes in the party, because they’re representative of the kind of humiliation Hestia knew she would have to deal with in order to get Hephaestus to make Bell’s knife. I say tolerate (rather than excuse) intentionally, but the point remains that the lines drawn from Bell and Hestia’s actions to their motivations are quite clear. And those motivations, both of them wanting to support the other, are enough to charm me with this image of a tiny, foolish family working in their own ways to keep the Familia together.

Maybe it’s kind of an insubstantial thing to latch on to in a show rife with other issues, but I just can’t look away from two adorable kids working as hard as they can for the other. Basically, it just hits me right in my weakness for moegirls and moeboys, and for people showing that they love each other through their actions. I think it’s very much to Danmachi‘s credit that we don’t just see Bell working while Hestia sits at home—the modes of their action may be different, but they’re both still doing something. Better yet, it’s pretty much stated that, socially, Hestia working a job to help support her Familia is outside of the normal role of a Familia’s patron. In both this and in begging Hephaestus to make Bell a weapon, Hestia steps outside of her divine privilege to make sure she can support Bell.

Viewed alongside Bell’s adventures in the Dungeon, Hestia’s willingness to take upon social disgrace and personal discomfort for the sake of maintaining their Familia lends the relationship a balance that I really appreciate: Bell can only adventure because of the power Hestia’s given him, Hestia can only continue to be his patron because he works to keep the Familia upright, and yet he can’t yet do it on his own, so she does what she can. And both of them talk constantly about supporting the other, which is something I think has generally been missed in commentary on the series thus far thanks to the generic familiarity of Bell’s “get stronger” rhetoric.

I know this has been kind of a wandering reflection on a show that’s really very silly, but I just can’t ignore the fact that, despite Bell’s puppy love for Aiz Wallenstein, it’s his relationship with Hestia that’s been at the center of this series so far—and I’ve loved. Director Yoshiki Yamakawa’s talent for generating chemistry between characters (something that was on full display in Kill Me Baby) has made this relationship endearing and funny, besides heartwarming. The comedic timing between Bell and Hestia is excellent, even if the jokes themselves are standard light novel fare, letting the genuine warmth that clearly exists between them shine through.

We’re very nearly out of first volume of the light novel’s material, so I don’t know where things are going from here…but, at least for now, I just want to chime in with my take on why Danmachi, for all of its problems, is a show that I’ve really enjoyed watching thus far, and why, despite the unknown of where it might go from here, I’ll be watching for the rest of this season. After all, how could I go more than a week without side-by-side moe toothbrushing?

16 thoughts on “Why Danmachi Works: Moe and Family Soften the Heart”