So, yeah—sorry the blog went silent after the Ore Monogatari!! post last week. It was a pretty terrible week overall (and immensely stressful besides) and, as much as I wanted to keep writing, I was just so burned out and beaten down that I couldn’t muster up the energy to put together a quality post. But I’m back now and feeling a lot better! Thanks to everyone who gave me moral support through the week! I really do appreciate it! Now let’s get on to some anime! 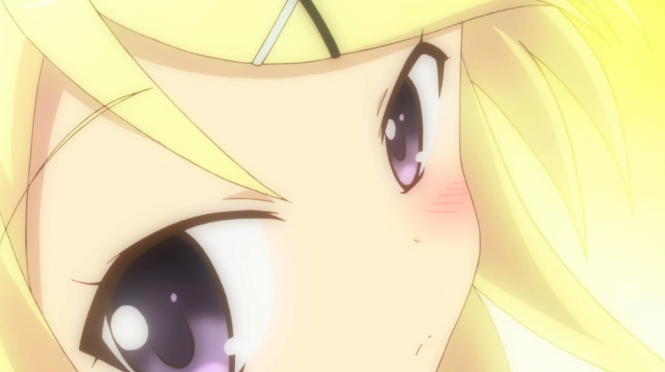 Ore Monogatari!!, Episode 3: It’s safe to say now that there was a love confession and it was great.

Punchline, Episode 3: Okay, so that’s a little more like it. Aside from the stupid period joke+pregnancy joke+condom joke reel, this was the first episode that really engaged me from start to finish and managed to win some investment in the characters from me. Meika’s backstory flashback actually had some impact thanks to it not being centered around Yuta, who is maybe turning out to be the weakest character of the bunch as he basically consists of nosebleeds and yelling at this point. It was cool to see Mikatan and Ito interacting in the Strange Juice bit and the “steal the bear” plot actually worked quite well thanks to the shock value of poor Muhi getting cut open. With a story of prophecy coming from Meika’s grandfather in the flashback, hints of the larger plot are finally starting to feel like they have some connection to the actual lives of the characters. Could have done without the nosebleed over an elementary schooler at the end, though…

Nisekoi:, Episode 3: It was a pleasant surprise to see the usually irreverent Nisekoi tackle Chitoge’s issues with her mom with actual sensitivity and emotional poignancy. Of course, we know things are headed right back to the status quo, but that doesn’t invalidate the unusual gravitas the show brought to Chitoge’s phone conversation with her CEO mother and the subsequent scene where she removes her trademark red bow. I’ll be honest: my heart sank just a little bit to see Chitoge-chan with her hair down, making a really sad face. As much as I enjoy being rambunctious and crazy about who is Best Girl and celebrate the inherent silliness of the show, I really do have an affection for these characters and I honestly think that I’d react in a similar way for most of the other girls in Nisekoi were they to go through a similar sort of dramatic situation. Which, you know, makes it even nicer to know that SHAFT and Nisekoi can pull off topics that shouldn’t just be joked about. Diversity of tone has never been one of Nisekoi‘s notable characteristics, but hey! I’ll take what I’m getting here!

The Disappearance of Nagato Yuki-chan, Episode 4: Man, Haruhi really is here in an antagonist role isn’t she? Which is a bit weird, as the show apparently can’t help but throw itself wholeheartedly into maintaining Haruhi’s fascinating persona. Honestly? It feels like Haruhi is running this show herself against the intentions of the staff—you know how the original series credited the SOS Brigade with series composition aka the wacky broadcast order? It’s the same thing. Haruhi is running away with the show (and its best moments—the river sequence was almost sublime) and it’s starting to seem like Nagato ever reclaiming the show from her is impossible. The only way I see them getting out of this is to completely shuttle Haruhi out of the events of the episode. And that’s just the metatext, which is in total sync with what’s actually happening in the show. Yuki-chan can’t avoid it—Haruhi and Kyon fit together, even in this alternate universe, and there’s little (if any) place for Nagato in it. It’s weird. It’s a bit disconcerting. It’s also kind of fascinating because I want to know what happens in the narrative almost as bad as I want to know how the show it going to manage the unruly former leader of the SOS Brigade.

Sound! Euphonium, Episode 4: Shoot, shoot—I already have a favorite show this season (BBB), but I’ll be darned it Sound! Euphonium isn’t making an insanely strong case for taking that title itself. In a way, Sound! Euphonium reminds me a lot of Shirobako in the way it likes to slip tiny, self-contained truths amidst the larger conversation on effort, dedication, and passion. Reflecting back on my own experiences, I’m not entirely sure how much I buy the idea of the band…ahem…banding together to prove Taki-sensei wrong—to me, it seems more realistic he’d lose them entirely—but that’s not how the chips fell and it’s to Eupho‘s credit that I still bought the way things played out in the moment. The way the funny anime faces blending naturally (somehow!) into the otherwise quiet dignity of the show are kind of a nice microcosm for how that works—the superstructure of the show is so excellent that it carries along little discrepancies without allowing them to disrupt the overall flow of the show. Kumiko’s monologues (except for the expositional one at the end) are doing a lot of great work for the show, too, adding depth to Kumiko and character to the way the show portrays its events to us. It’s such a good show! I kind of can’t stand it!

Danmachi, Episode 4: Y’all are probably sick of hearing me say this, but we’re in unknown territory for me now, which means I was glad to see Danmachi really didn’t lose a step this week coming out of the first volume of the light novels. Bell is still the most adorable character of the season, Hestia is still working hard, and the new character, Lilacura, seems to be the representative for a larger conflict brewing. Delightful as always; which is all it needs to be! Also, the OP’s growing on me.

Hello!! Kiniro Mosaic, Episode 4: There’s not much else to say about Kinmoza these days besides simple admiration of the consistency with which the show executes its excellent formula. This show knows its characters and understands their dorkiness at a level approaching perfection, making it a joy to watch every single week.

Yamada-kun, Episode 3: Finally sold on this adaptation and it’s all thanks to that scene between Yamada and Urara right at the end. I even wrote about it!

Show by Rock!, Episode 4: Everyone in this show is a huge dork, which makes their more serious character moments (Rom’s encounter with Syu☆cho and the letter from Moa’s mom) work so well. I’m a huge fan of the “look how silly these people are!” brand of characterization as a way to create attachment with characters—it’s working brilliantly for Show by Rock! right now.

Wish Upon the Pleiades: I’ve fallen behind due to the craziness of last week and right now I have it temporarily on hold. I think it might be a better marathon, but who knows if I’ll ever come back to it at all. Ah, what a difference a week makes…after episode two I was thinking this might have been my pet show for the season…

Plastic Memories: Dropped. I am the opposite of interested in the Giftia trafficking plot. I am actually quite loathe to watch it. Really? This was the best idea you had to do with the plot? If the setting was actually interesting, I might care, but instead we’re moving away from the character-based drama of retrieval that Plastic Memories is actually good at (because lord knows it’s no good at anything else, really).