As expected, this episode of Ore Monogatari!! brought to a close the relationship tension between Takeo and Yamato—and, as I expected, Yamato’s “secret” was revolved around guilt induced by Takeo’s perceptions and expectations of her. It’s not like this is an uncommon thing; they’ve just started dating and still don’t really know much about the other person yet. But, while it’s nice to see the tension resolved in Ore Monogatari!!‘s typical adorable fashion, I had a few problems with both the execution and the content of the episode.

The biggest issue for me is that the narrative itself—through the proxies of Yamato and Takeo’s own reaction—basically lets Takeo come out of this situation without casting any sort of examining light on him. Let me make one thing clear right from the start: this relationship problem never about Yamato and whether or not she was “pure.” All of Yamato’s anxiety, all of her tears…they’re all on Takeo. I’ll stop short of saying it’s his “fault,” but the instigating moment was when Takeo applied a label (“pure-hearted”) to Yamato and then followed it up with telling her wouldn’t touch her until she was grown-up. (For a more detailed breakdown of that conversation, check out the episode 5 post).

Maybe Ore Monogatari!! is planning on touching on this later, but for all his good intentions, Takeo is still trapped within a very narrow spectrum of ideas on what a relationship is and how he should ask. I don’t doubt for a moment that he truly does love Yamato and wants to do right by her, but his inexperience and naivety are on full display when he imposes his own perceptions on his adorable girlfriend. So, while it’s awesome that Takeo is so full of confidence and such a genuinely good guy, the way he is makes it hard for Yamato to keep up. He’s such a “cool” and powerful presence and, unfortunately (to my mind) the show seems to see only this side of Takeo—and I think that’s where the relationship imbalance I was talking about a few episodes ago comes from.

To this point, aside from three outstanding introspective Takeo moments (the leaf in the sink, under the beam, in the fire), Yamato has been the only one to really have been inflicted with internal conflict to this point. Takeo is so assured about the way he thinks things should go and so solidly in place with those ideals that Yamato is the one who ends up changing in the end—it’s Yamato who opens up to him, who has to do the admitting, and Yamato who is the person who gets worried about. And I’m not saying that’s bad, but there’s no equivalency happening from Takeo himself or from the show. And I dislike that. I dislike that Yamato’s worries—inflicted by Takeo’s unfortunate, well-intentioned words—are solved by Takeo running to her and telling her it’s okay for her to want to hold his hand. I dislike that Takeo’s certainty of purpose is negatively affecting Yamato, despite how much she admires him for it, and that it’s not being addressed.

Now, it is still relatively early in the series (we’re exactly 1/4 of the way through at this point), so maybe we’ll see this addressed in one big conflict later on, but there is a certain degree of idealization that’s happening with Takeo’s character…and it’s making me a bit uncomfortable. I’m not saying I want Takeo to suddenly reveal some awful flaw or tragic secret—I’d just like a little more acknowledgement from the narrative that it’s his great strengths—his wonderful, caring personality, his physical power, his solidity of mind and spirit, his desire to learn and be the best boyfriend he can—that also function as his weaknesses and sometimes blind him to the feelings of others, even those he cherishes most. I don’t know: tell me in the comments if you think I’m being unreasonable about this.

On a different level, this episode of Ore Monogatari!! also seemed to be showing a few cracks in the show’s craftsmanship. This isn’t to say the production itself is falling down the gutter (although the relative lack of animation seems to indicate Madhouse isn’t allotting all that many resources to the show) and there are certainly still standout moments, but I think this is a case where the light-heartedness of the content is a bit at odds with the simplicity of the presentation. While Chihayafuru‘s high-stakes matches and intense interpersonal drama were able to carry the show despite having similar levels of production values and very similar visual presentation (lots of panning shots as per Morio Asaka’s other work), Ore Monogatari!! doesn’t have that same intensity to keep your attention (and I’d also say it’s not as well-written as Chihayafuru).

This combination leads to some scenes (like the long conversation between Ai, Suna, and Yamato) to feel somewhat lifeless. Although I can intellectually understand the beats in Yamato’s character arc, the austere direction consisting of medium close-up still shots, camera pans, and very slow-paced editing, along with the relatively inefficiently written dialogue, keep the scene from really being all that effective. Instead, Ore Monogatari!! leans into its soundtrack and amusing background tricks (Suna slowly getting smaller and smaller) to maintain engagement. While that works to a point, with a scene as long as this, it’s just not good enough and starts to push towards being dull to watch. Where we see this pattern be broken is Ore Monogatari!!‘s forays into silliness—Yamato’s fantastic faceplant, the young couple’s first awkward attempts at hand-holding, and the extraordinary kissing experiment inflicted on Suna by Takeo. These scenes are marked by increased visual variety (the icy wind that blows in Suna’s face), quicker editing, and can lean into the engagement factor of the humor to offset the lack of tension that pervades Ore Monogatari!! That isn’t to say that this show should be super tense—that would be an entirely different anime—but when you don’t have tension, you have to have something else, and when Ore Monogatari!! isn’t being stinking cute or funny, it doesn’t have much else.

Basically, that just leaves us with an inconsistent, imperfect show—and that’s just fine by me. I don’t demand all shows I watch work as perfectly for me as Blood Blockade Battlefront does (I think that’d be exhausting). Instead, we get a show that gives me a lot of things to talk about and that’s a very good thing. 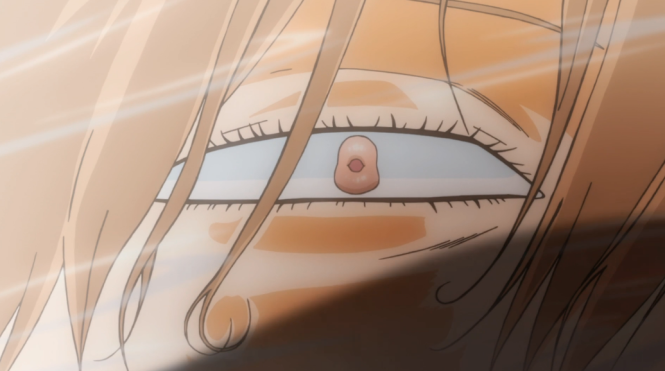