As I started the final five episodes of Rose of Versailles, a friend warned me that I was in for a “rollercoaster.” Having come off the ride, I think I’d have to say that, as thoughtful as the caution was, it was unfortunately understated, as the conclusion to this magnificent series wrecked emotional havoc on me like it had not in 35 episodes prior. In considering why, I of course ended up at some of the easier conclusions for explaining my emotional wreckage—character investment, Stockholm Syndrome, lack of sleep, an exceptionally doomed ship—but I found myself unsatisfied with those answers. However, in considering the show as a whole, rather than simply a five-episode excerpt, I came to understand that I had, to continue to metaphor, been on a rollercoaster the whole time. On a terrifying and exhilarating ride known as “life.” 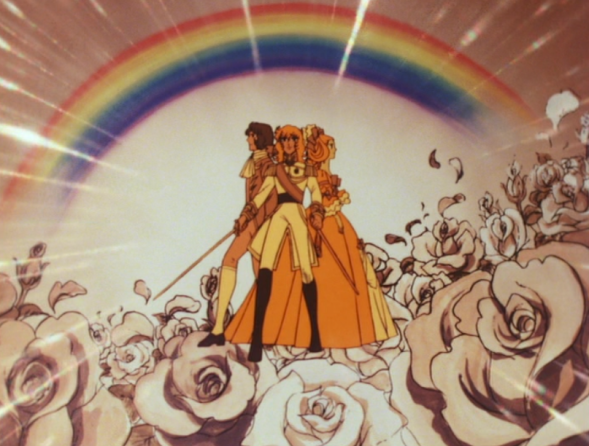 By the time Rose of Versailles comes to its conclusion at the end of the French Revolution, we have followed the life of Oscar François de Jarjeyes for something like 40 years. Made possible by the length of the series (Rose of Versailles is the 7th longest anime I’ve ever seen), we begin the journey with Oscar’s first breath and conclude years after she has breathed her last, as even the memory of the noble (in both social station and in human spirit) creature that was Oscar François has begun to seep away into the stars, painted over in the slow strokes of the passing era.

There is, I believe, inherently a sort of profundity in witnessing such a span of a single individual’s life.

At its very core, Rose of Versailles is a story about change. The backdrop of the years immediately preceding and including the French Revolution are the perfect setting in which to explore such an idea as the volatility of the era acts as a macrocosm paralleling the personal shifts which define the life of Oscar time and time again. This is a shoujo, so romance is certainly one such herald of change, but it is in fact the growth and modulations of Oscar’s character that truly exemplify this theme. And to witness such breadth and depth of humanity in the form of a single, liminal human being is…well, it’s honestly overwhelming to a degree. In the momentary experiences of the individual episodes, it’s easy to forget how sweeping the changes in Oscar’s life have been.

Oscar—heroic, idealistic, tragic Oscar—stands as both the pivot point and the absolutely impermanent foundation of this story, a story that celebrates not only the enchanting life of the one who may or may not be the true Rose of the Palace of Versailles, but merely by existing praises human life itself by allowing us to see being like ourselves live out the course of her life in the best way she could manage balanced on the turning wheels of time.

It is shockingly easy to forget that Oscar, for all the greatest of her conclusive abandonment of her social status to fight alongside the people she has decided truly represent the France she loves and for all the “progressive” values of feminine identity she embodies, spends the majority of Rose of Versailles as a particularly conservative figure, a member of the old guard, a solider who takes orders from those who preserve the status quo. She does not—or perhaps cannot—see beyond the system in which she lives, conceive of life outside of that life which she has known. Even confronted with the poverty of the people of France time after time, it is not until the man she loves asks her to leave behind her old world that she changes in the most profound way possible. She departs from one world into another and, as a result, she ultimately departs this world for another.

Life and death. Changes and continuations. Beginning and endings and beginnings again. The expanse of Rose of Versailles is shot through with these themes, but the most compelling realization available to one upon seeing these themes is that they are not authorial additions, nor narratively-derived elements, nor even character-based expansions: they are simply the natural workings of life within time.

Space is cold and stiff, but Time is alive. Space divides, but Time brings everything to everything else. It does not course outside you and you do not swim upon it life a drifting log. Time flows through you: you yourself are in flow. You are the river. Are you grieving? Trust Time: soon you will be laughing. Are you laughing? You cannot hold fast your laughter, for soon you will be weeping.

It is impossible to live life in stasis—throughout the Rose of Versailles, the chant of the common people (taken up by André, the one person closest to Oscar) choruses again and again, “It is the dawn of a new era!” Which is true. But, in the midst of the life that belongs to Oscar, this great cry of the masses can be heard once here, again there, once again even there. For what is life but a string of new eras. We are always living in the dawn of a new self, of a new life, of a new way of being. For most of us, change is never so grand or sharply contrasted against the old as is the country ushered in by the French Revolution; it is rather incremental, perhaps even unnoticeable.

And it is that subtlety, the being “in flow” which pulls us blindly through our own changes, the lends such inordinate value to the experience of watching Time move through Oscar. Particularly when contrasted against the contemporary anime market, where a whole genre of shows whose conception of time is that of a perfect bubble, of an idealized, unchanging status quo, the tiny changes which bring Oscar from birth to death become remarkable. But, more than that, the awareness of change, the privilege of witnessing the full breadth of a single human life makes Rose of Versailles an artifact of supremely delicate value.

I fear I’m failing at articulating exactly why I believe the -watching of a single life in its entirety- is such a honor to watch play out on screen, and I’ve come to wonder if this is attributable to the fact that my own experience of “life” is a mere 22 years, the barest beginning of an “entirety.” And compared to the infinity of an afterlife, what is 22 years but a meager spark in the great fire of the universe’s time? But let me attempt anyways.

In speaking of the dignity of human person, we often find ourselves attached to only a particular instance of the individual—one single era. The Oscar who rides at the side of Marie Antoinette at age 17. The Oscar who guides Rosalie towards revenge. The Oscar whose heart breaks over a Fersen who loves the woman she is sworn to protect. The Oscar who abandons her womanhood. The Oscar who finally finds love has been at her side for as long as she has been alive. Each of these iterations is completely Oscar and yet only the smallest fraction of her. The full Oscar can only be seen, only be understood, only (I believe) be truly loved as her complete self, from birth to death and encompassing everything in between. This why André is uniquely able to love Oscar unlike any other—he knows almost everything there is to know of her. 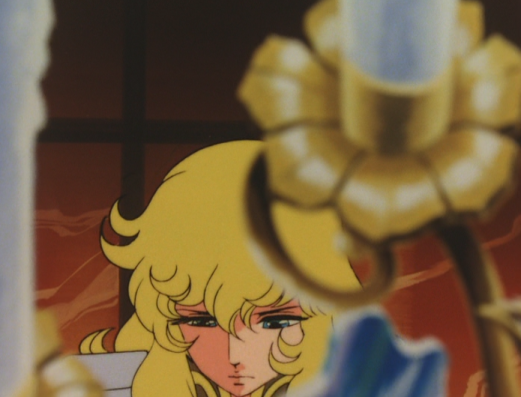 The gift that Rose of Versailles, then, bestows upon its audience, is the treasure of being able to know even more of Oscar than her truest lover did. André departs from this world before Oscar does. Yet we remain—to see her grieve, to see her cough up blood, to see her brilliantly illuminated by the fire of the cannons, and to see her pass away on the battlefield for freedom. At the moment Oscar dies, those of us who have watched her live know all there is to know about this character, about this representation of a human. The fact is that few of us will ever, over the course of our lives, witness the whole of a human life from birth to death. Certainly, we will know profoundly, understand to the best of our ability, love deeply. And, granted, a fictional medium (aside from a moment-to-moment reproduction of a character’s life—an absurd prospect) is limited in its ability to truly show us the fullness of a human being.

For all that, though, I still find there to be something awesome about following a life from its very first moments to its very final ones. The richness and the weight and the basic dignity of human life is unmasked by such a demonstration. It is impossible to not see. It is impossible to ignore. And so, despite the incompleteness of watching the life of Oscar François de Jarjeyes in Rose of Versailles, it is still a “full” revelation of a human person, completed in the changes that draw the one-time Commander of the Royal Guards from infant to memory.

To quote Balthasar once more:

We find Love in Time. Let the Time we have bring us to Love. Love of ourselves, of others, and of this great gift that is being alive.

12 thoughts on “Rose of Versailles: The Changes of Oscar de François de Jarjeyes and the Dignity of Human Life”