Holy cow, is it that time already? Two shows ended this week and the rest of them will be done next week, mostly. I will admit that I like the endings of seasons better than the beginning of them—if only because of the satisfaction that comes from moving shows from the “Currently Watching” section to the “Completed” section of my Hummingbird account. Anyways, with the season winding down, my backlog watching is ramping up, which is fun and cool!

Ore Monogatari!!, Episode 11: Things got a bit…tense this week. Episode 12 might be my last episodic post on this show, if only to free me up to enjoy it without having to think so much about it.

Sound! Euphonium, Episode 11: Well, I’m glad Reina got the solo back and I’m glad Yuko suffered and holy wow apparently the Reina x Kumiko ship is still alive, at least if the direction is too believed. You guys should know already what my thoughts were on episode 8, but this…this was something else entirely. Which means, I think, that Sound! Euphonium is obligated to not cop out on this relationship now. If it does, it’ll have hit a point for me where the direction is disingenuous and is actively contradicting what the plot says to be true. And that’s bad. So, be smart Eupho. Don’t make me put you in the trash with Yuko.

Nisekoi:, Episode 11: Oh, an episode about Onodera dealing with body image issues? I’m sure Nisekoi will handle this fabulously…actually…this isn’t that bad, considering what they could’ve done. A full-on Onodera episode with only one episode left, so this was mostly a wash, although the the latter half of the episode was surprisingly…good? Kana Hanazawa, despite how often she gets typecast in the same sorts of roles, is honestly a fantastic voice actress, and her performances in both halves of the episode elevated the entire package. Frankly, I was basically ignoring the subtitles after we switched into “A Good Morning” and just enjoying KanaHana’s voice work and the oddly serene tone the B-part took on. And what do you know? The gentle pacing of this section of the episode sold Onodera and Raku effectively. They had more chemistry in the flashback than they’ve ever had in the main series—and Nisekoi slowing down and simplifying and just letting the story tell itself worked in a way this show has never worked before.

Danmachi, Episode 12: Not my favorite episode for a number of reasons—chief among them the rather unwelcome “capture the girl to get to the guy” trope and the story parts of the episode feeling rather rushed—but there were, as always, a number of pieces that I liked a lot. As incredibly rote as the hot springs bit was, having Bell run on water and literally hop like a bunny while screaming, “I’m sorry” is Good Entertainment, and the scenes passed by quickly enough that they weren’t overly annoying. The better stuff was Ryu’s story about her old familia—again, the theme of forgiveness and re-assimilation into a family-like unit returns—and Hestia actually cutting loose her power for Bell (and this after he’d figured things out enough so that he was no longer in danger). Bell doesn’t rescue Hestia; once again, she seeks out to rescue him. The affection (when we’re not dipping into Hestia’s light novel infatuation) between the two of them is so palpable and so genuine it’s impossible not to be happy about an episode where it’s featured. 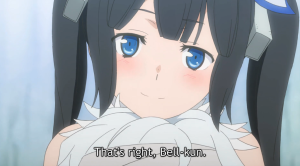 Hello!! Kiniro Mosaic, Episode 12 [End]: And thus ends the best comedy of the season. This finale was more of a lazy slouch into the final “See You!” than the riotous fun I would’ve preferred, but for a show that we’ll probably never see more of, it was a pretty decent way to conclude things. As much as a slice-of-life comedy anime can be, Kinmoza basically had a “and their fight goes on ending,” except with the fight replaced by life. In all the time since the midpoint of the first season, things really haven’t changed much in Shino’s world—and that’s fine. The idea of these goofball kids starting to settle down and prep for college isn’t really one that’s all that fun to contemplate, so letting things ends like this helps to preserve the fun, relaxing world we’ve been experiencing for the past 24 episodes. And that’s okay.

Yamada-kun, Episode 11: A week later, Yamada-kun is back to being solid, the emotional beats and plot events feeling far less chaotic and far more measured than last week. Better yet, with the tension continuing to rise, the pivotal scenes hit home with a lot more emotional heft—something I distinctly missed in last week’s episode. I’ve never been on the Odagari x Yamada ship, but I have to admit that she’s coming across really well right now. But, as always, the main draw is the Yamada x Urara relationship and, even with the ‘lost memory’ trope I despise in full effect, the two of them continue to operate on a system of give and take, of shared trust, that transcends whether or not Urara remembers Yamada. As for the coming finale…it’ll be interesting. There’s still a lot of content from the manga in between where we are now and where this arc ends, but there are ways they can work it without making everything feel too rushed. I believe in Michiko Yokote!

Kuroko’s Basketball S1, Episodes 1-25 [End]: Wow. Didn’t expect to watch this entire season in two days. That was a lot of hot basketball boys. It’s okay, though. I got it all out in the upcoming Aniwords column for tonight! Overall, really liked it—can’t wait to get on to season two. 7/10.

Dennou Coil, Episodes 5-8: This show is delightful, but I’m kind of pacing myself with it because it’s a nice show to watch in small chunks. Super charming, fantastic animation, neat concepts, and characters that are being slowly sketched out and filled in with a lot of care. Densuke is still the best, although Poop imouto is catching up.

Oregairu S1 Rewatch, Episodes 1-6: Getting ready for the waterfalls of season two by reminding myself what happened in season one. It was a good decision, as there’s quite a lot I seem to have forgotten since I marathoned this season a couple years ago. One thing is for certain, though. Yui is absolutely amazing and the heartbreak that I know is coming for her eventually has already got my poor heart in agony. Yui, you don’t deserve this. ;-;