By this point, I was pretty burned out with watching new series, but some shows managed to pull through pretty well! It’s both a nice surprise and also kind of bad because I’m at the point where I’m trying to cut shows, not add them.

In any case, here’s the final installment of my first impressions on Summer 2015’s anime offerings! Hope you enjoy!

Lookie all the new animes, onii-chan~!

Chaos Dragon: An episode that started off as merely dull, badly paced, poorly constructed, and generally lame turned gross in the final quarter with the disgusted abuse of a cute anime girl—slashed across the chest once (while the male side-character merely gets kicked to the side) and then sacrificed by the love of her life for the sake of making him a hero. Yuck, yuck, gross, gross, bleh. I’m not going to make the mistake of laying Chaos Dragon‘s faults at the feet of the big name writers involved—after all, they’re just advertising bait—but you’d still think a DnD campaign played by some of the best-known writers (at least by English fandom standards) would have had a least a a hint of originality. Instead, it’s troped and boring and entirely uninspired. Maybe they should have invited Mari Okada to play with them… Verdict: dropped. 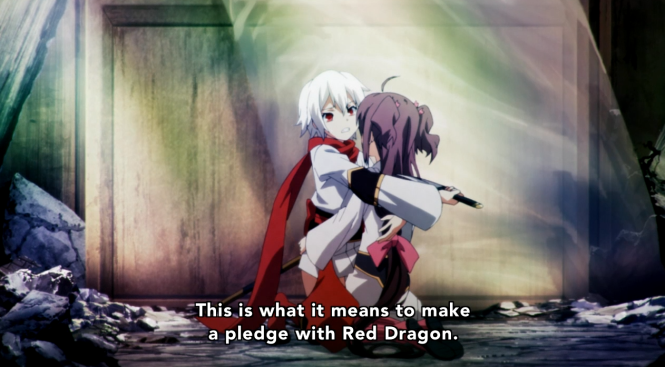 Aquarion Logos/Aquarion EVOL OVA: Let me tell you what: the Aquarion EVOL OVA that preceeded the Aquarion Logos premiere was a thing of beauty—character fanservice in the extreme and in the best way possible. Funimation bundled the two episodes together in a single video, which meant that I clicked the play button fully expected Aquarion Logos to start playing. So, I was incredibly confused and also incredibly overjoyed when I suddenly saw the characters from EVOL show up on screen. What followed was 25 minutes of a concentrated dose of all the best things about Aquarion EVOL (minus a proper amount of MIX and Andy). I was giddy. Joyful. Impossibly happy. In short, Aquarion Logos never had a real chance. I skipped through the episode, barfed at the ugly character designs, and then stumbled onto a mecha transformation scene without any music playing. And that was the end of that. Verdict: Logos is bad, watch EVOL instead. Dropped.

Honestly, I’m kind of floored. I was definitely not expecting Madhouse’s entry in the “trapped in an MMO” genre to be the first episode to inspire me to write an entire post on it. Yet, here we are.  I’m not really sure where Overlord is going to go from here, but this is one of the best premieres I’ve seen yet this season—and that’s good enough for now. Verdict: keeping. 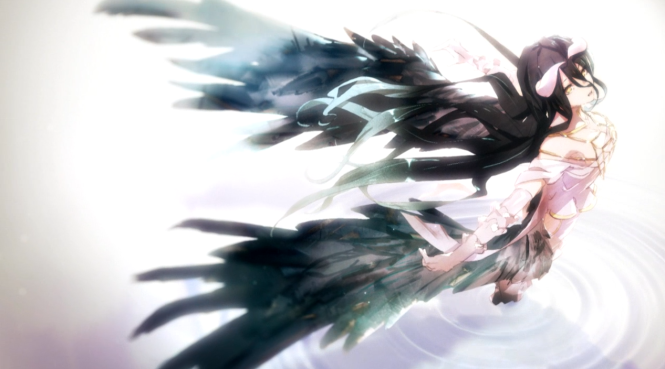 Would you believe me if I told you I basically have no feelings—good or bad—about Prison School? It didn’t scandalize me, it didn’t shock me, it didn’t entertain me, it didn’t offend me. I finished the episode and felt absolutely apathetic about it—and believe me, I went in expecting the utter worst. Instead, what I got was something that, on an intellectual level, I understood was supposed to be trashy and exploitative and gross, but instead felt to me like something that was so utterly distant from everything I care about in stories and in anime that it never even really registered as something that could affect me on a substantive level. It’s a very weird feeling, but Prison School honestly just breezed around me like air and left me feeling as if I hadn’t even watched the episode. Of course, I had, but this kind of encompassing disinterest is so foreign to me that I still don’t really know what to make of it. Oh, but I know one thing for sure: Verdict: dropped because whatever, I guess… 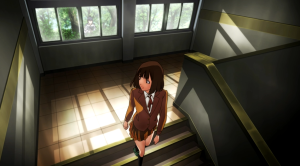 Charlotte: So, from the writer of Angel Beats! (which is one of my favorite shows) comes Charlotte, an anime with a premise as generic as they come—but since when has that ever stopped me from being interested in things by people whose stuff I’ve like before? As for the premiere itself, I quite liked it! Jerk male protagonists aren’t super original character types, but they’re still different enough to feel somewhat fresh. Plus, Yu actually felt quite realistic to me. A kid his age gets an incomplete super power and uses it to cheat on tests, catch the eye of the girl he likes, and wreak his vindictive teenage spite on other kids he doesn’t like? Yeah, that sounds just about right to me. But he’s got a nice redeeming trait in his relationship with his little sister—who’s also a surprisingly real-feeling character, as well. Overall, I dug the tone, the production was nice, and there’s the making of an interesting story there. Verdict: holding on for a while.

Rampo Kittan: Game of Laplace: I did the first two episodes of Rampo Kittan together to see how the whole mystery was handled, and…yeah. It’s a shame, but a fairly engaging premiere turned out to be pretty dull in the reveal episode, as Kobayashi monologued the entire case to us. This killed most of the engagement I had with the show’s quirky tone and visual style (which did continue in the second episode) and left me pretty ambivalent about watching any more. Although Kobayashi is cute as heck and also scary/sociopathic enough to be fascinating on his own, it’s not enough to override the show mishandling everything that makes a mystery story interesting to me. It’s not so much the how of the crime that interests me as it’s the how did they figure it out? And Rampo Kittan‘s formula of, “Well, Kobayashi is just a really observant and intelligent little tyke” isn’t going to do it for me. Sorry, Seiji Kishi—you did your best visually, but it wasn’t enough. Verdict: Dropped. 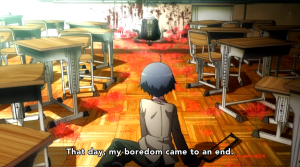 Gatchaman Crowds Insight: Sheesh, talk about saving the best for last. Delaying Crowds until late gave me the chance to watch “Inbound,” the recap/prequel episode right before launching into the premiere and the one-two bunch was really fun. “Inbound” was far more action-y than Crowds normally is, but it was a blast to watch the team in action alongside a seemingly reborn and reinvigorated Rui. The premiere episode, then, was far more relaxed and light, dropping us into newbie Gatchaman Tsubasa’s world and introducing Gel-chan the supposedly harmless alien. However, I’ve got my suspicions about both Tsubasa and Gel-chan; the former seems to have something of a quick temper and the latter’s ability to visible manifest the hidden feelings of humans is playing with fire. There’s also, of course, the question about what exactly it means to “unite” everyone. In short, it was a Gatchaman Crowds episode—packed with visual flair, the same lovable characters, and a metric ton of interesting ideas. Verdict: keeping.

And that’s the end of the premieres! I know I had a few more shows on my list (Sore ga Seiyu and Venus Project, for example), but I’m already super happy with my watchlist and I’m starting to feel anxious about getting on to second episodes. I have plenty of shows to care about (including backlog stuff), so I’m done sampling. There will probably still be a few changes coming to accommodate a reasonable daily load, but my watchlist is now pretty much in its final form.

As always, thanks for reading! I’m looking forward to sharing this new season of anime with you guys!