In which all of my irritation with Oreki melts away—even if Oreki is constantly putting on an act for his friends, he can’t fool the camera. Unsurprisingly, the sincerity offered therein has given me a whole lot more appreciation (dare I say affection?) for this character and the particular circumstances of the life he’s living.

I suppose it’s been kind of obvious since much earlier in Hyouka, but it turns out Houtarou Oreki is a pretty lonely kid. Of course, I don’t say this to excuse anything about the way he behaves in his loneliness, but giving Oreki someone outside of himself that he could relate to—even if that person was in his situation 45 years ago—finally helped things to click for me. It’s not just that Oreki feels or is different from his classmates, and it’s not just that he struggles to invest in the events and people around him (although I’d say that’s still a big part of his problems)—it’s that he’s trapped inside an echo chamber consisting of just himself. Oreki’s incapable of communicating how he feels about his gray school life because there’s no one out there that’s he’s found that genuinely wishes to understand him.

The separation between Oreki and pretty much everyone else in Hyouka is made almost painfully obvious via the cinematography this week. Of course, I still think it’s important to note that Oreki isolates and differentiates himself from the others as much by himself as they do to him, but the fact itself remains: Oreki is not, and for the moment cannot, be integrated into the group in which he’s found himself. Like most things in life, this is not an absolute. However, it is a pattern consistent enough to be noticeable—and that is really the point of this whole episode and the story of Seikitani Jun. Observe: 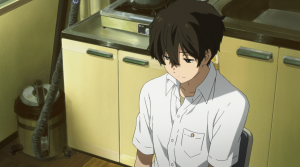 There are plenty more shots like this that show up, but I think I’ve made my point. Now, how does all of this play into making me far more positively inclined towards Oreki than previously? Because it’s not like his isolation—whether via his passive-aggressive relationship with Satoshi, his openly tense one with Ibara, or the gentle naivety of Chitanda in their relationship—was unclear before. That hasn’t changed. As I said earlier, the key that unlocks the door from “Oreki is isolated, but he’s kind of nasty about it” to “Oreki is isolated, and now I can empathize with him” is named Seikitani Jun.

Although his “tribute” to Seikitani Jun is about as close as Oreki gets to stating this explicitly, it seems he’s found a kindred spirit in the high school exile of 45 years ago. There’s the parallel of the deliberate exclusion of Jun by the school body and the way people like Ibara and Satoshi push back again Oreki’s way of living, but the really important resonance between the two is the lack of being understood—and it’s this that really pushes Oreki as far towards genuine emotion as we’ve seen him go yet. Understanding the true meaning of “hyouka” seems to actually be the easiest part of the whole mystery for Oreki to solve, and why? Because “I scream” may as well be what Oreki has been doing this whole time. The inability for the other four characters in the librarian’s office to understand Seikitani Jun’s feelings isn’t just them not understanding a 45 year old puzzle—it’s them not understanding Oreki himself.

Of course Oreki would be frustrated by having to spell out the meaning of the pun plainly for Satoshi, Ibara, and Chitanda! Doing so is like having to explain himself, having to justify his way of life. “Seikitani Jun screams. I scream, too! Why can’t you understand that? Why do I have to tell you?” Honestly, I’ve having a bit of trouble putting it into words myself, because it just seems to make so much sense. It may not be an entirely fair emotion to direct at others—after all, how are Ibara and Satoshi supposed to really understand Oreki when he refuses to be frank with them except on rare occasions? Despite that, though, it’s an emotion that arises and so, it’s a valid one. 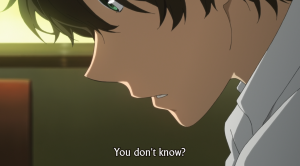 However, for Oreki, there’s still hope. There are still people around him who, even if they don’t really understand him, are willing to stick around him. I think Oreki does recognize that, which is why he can tell Satoshi that he sometimes wants the life Satoshi’s living—knowing that Satoshi, for once, will take him entirely seriously—or why he’s willing to be “used” by Chitanda to complete the anthology. And just because they don’t understand him doesn’t mean they can’t understand Seikitani Jun, which I think gives Oreki a little bit of hope. Because eventually Satoshi and Ibara do figure out the pun themselves, and even though Chitanda must be told, she has stared the same fear of being “alive, but dead’ (you could, perhaps, call that gray) in the face that Oreki sees every day.

So, I’m going to believe that Oreki’s desire to be understood will eventually help him to transcend all the blocks and barriers he’s put up himself to prevent that from happening. I’m going to believe in his friends, that they won’t give up on him and that they’ll someday come to understand him a little bit better. At the very least, I think Oreki’s ongoing interrogation of his own lifestyle will help him to avoid the fate of Seikitani Jun—someday, he’ll scream and be heard by someone.