This week is kind of the reverse of last week—rather than complaining about everything, I’ve got a lot more praise to hand out. And it feels good.

K: Return of Kings, Episode 11: I’ve been accused (in a friendly way) of being a fake intellectual, a claim I have to admit holds some water seeing as it took me all the way to episode 11 of K‘s second season to really grasp the WWII comparisons (the original Red King incident with Mikoto was the atomic bomb drop, ergo Grey King Iwa’s despair; the master race idea behind the Slates, etc.). I’m not really sure how well all of this comes together in making any sort of worthwhile meaning, though, because K continues to be more about power and agency than anything. The faults in the Greens’ ideas about power are already starting to show—no matter if people have power or not, some are always going to stand above the other because that’s just the nature of power in human society. Injecting more power isn’t going to achieve anything; in fact, it’ll likely only set up people for more despair and more death. But according to Iwa, now they have a choice. Not so. It’s an illusion; but how’s a man wreathed in fog supposed to apprehend this kind of truth anyways?

Haikyuu!! S2, Episode 11: I like these kinds of episodes. I would have liked it a lot more at lot more if it wasn’t just an extension of what’s been almost a full cour’s worth of relaxed episodes! These kind of wind down episodes are supposed to relieve the tension of the episodes prior, but there wasn’t any such tension for us, the audience, to wind down from. Oh, well. In any case, Haikyuu!! was back to its normal self this week; really for the first time since the season premiere. This episode coming after the episodes it did didn’t hurt its ability to be a fun time with all the characters. Bokuta is probably the best new addition to the cast (remember when Lev was relevant?), and we’ve also been teased a whole bunch of other new opponents for Karasuno to take on (the dude with the top of his head dyed orange was my favorite)—as well as some old. Oikawa, my trashy husbando! I’m thrilled the tournaments are starting up again next week; it’s about time!

Gundam Tekketsu, Episode 11: After a couple of weeks that felt like floundering to me, Tekketsu was back on its feet this week with a well-paced battle and a continued obsessive focus on the idea of family. Akihiro faces his old family in order to preserve his new one, and its his new family that builds him up. On Earth, the Gjallarhorn Specialists are encountering their own families, while Ein continues to mourn the loss of his. The bond between Turbines and Tekkadan tightens, and with a common foe before them and their brother-leaders ready for a fight, it’s likely to grow even closer. I noticed, especially, the care that the Turbines members have obviously developed for Tekkadan—on an organizational level and on a personal one. Okada and Nagai has experience with these kinds of winding reflections on untraditional families (Toradora‘s specifically coming to mind), and it’s really interesting seeing that concern manifest in the world of Gundam.

Comet Lucifer, Episode 11: It feels weird being thrilled about a cool 2D animated fight in a show I’ve constantly praised for its 3D fights, but whatever. All in all, Comet Lucifer continued its trend of being entertaining and easy to watch without really doing all the much that’s original or hugely impactful. The reveal that the secretary is an alien mecha guardian from another planet came out of nowhere, but it was still fun. Zoneboyle’s death was set up too obviously, but still managed to ben somewhat surprising. And, of course, Moura showing up in some kind of Amazonian war outfit was, well, unexpected. But I ain’t watching Comet Lucifer for thoughtful narrative coherence; I’m watching it because it’s fun and because it’s earnest and because I like it. One episode to go! 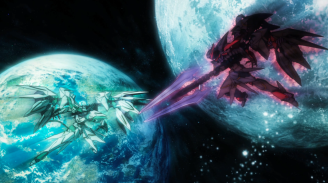 Concrete Revolutio, Episode 11: So, superhumans are just evolved humans, huh? A ridiculous claim—there are so many beings with weird powers floating around Conrevo that it’s impossible to keep track of them all. And, certainly, they’re not all human (Earth-chan, for example, is a robot). These are impossible, arbitrary labels. And yet, the Bureau doesn’t protect all superhumans—sometimes they fight them. And to Jiro, Claude is not a superhuman, but a demon (it’s not clear if the Bureau was familiar with Claude before he showed up; after all, the Imperial Ads guy calls him an “existential question” for the Bureau). He’s a hypocrite: he doesn’t like that Imperial Ads is trying to cut certain beings out of the definition of superhero, but he’s willing to exclude Claude from the Bureau’s protection because he doesn’t believe in what Claude is doing. Jiro wants too much, and it makes him inconsistent—and that’s what sets Kikko off. If a demon isn’t a superhuman, then is a witch a superhuman? And does Jiro, with his yokai powers that he’s apparently unaware of, fit into any of these categories.

In fact, Kikko is a demon herself—and what this will ultimately mean for her role… who can say yet? As an episode, this was somewhat less engaging a watch that previous ones, but even when Conrevo isn’t at the top of it’s “being entertaining” game, it’s still packed with stuff to think about.