I just want you all to know that, while I do really like the current season, I’d give it all away to have Macross Delta airing right now. Well, except maybe Konosuba.

As I noted in my APR ballot for the week, most of the best episodes of the past week involved suffering—explicit or implied or inbound—in some capacity, which again provides me with a chance to remind people that despite my love of cute and fluffy things, my all-time favorite anime’s premise is founded on a huge tragedy. Of course, while I won’t say this is all coincidental, I will note the reason all this suffering has been compelling to me is that it’s in the service of deeper human elements. Suffering on its own, for its own sake, is just gratuitous—but suffering that reveals something about the human condition or prompts us to care more about things beyond ourselves…that’s the kind of thing I was talking about in my Hanekawa piece from a week or so back. That’s something worthwhile.

The standouts in the suffering department with Rakugo Shinju and Konosuba, and as I usually open these posts talking about Rakugo, I’ll continue that trend. Episode six of this (still sublimely excellent) show may seem like a weird one to count in the suffering tally thanks to Kikuhiko’s triumph of self as performer, but Rakugo—like life—is never purely joys or sadness. Kikuhiko can find himself as a performer, but he’s still lost as a person to a great extent and the impending tragedy of his soon-to-dissolve relationships is certainly not going to do him any favors in that department. Or maybe they fill, since they seem to be the formative elements of the Yakumo we saw in the show’s opening episodes.

Life is equal parts tragic and triumphant—that Rakugo recognizes this would make it special on its own, but combine that with the show’s amazing execution (seriously, how is the cinematography so perfect each and every week?) and we’re halfway through a bona fide masterpiece, my friends. 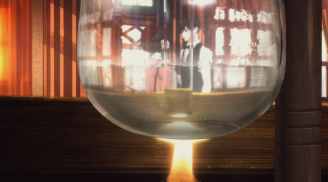 Konosuba, on the other hand, is probably not a masterpiece—at least by my definition of the word—but I do love it a whole lot. This week’s focus on Aqua, who is hands down my favorite character of the season bar none, was simultaneously exciting and excruciating for me. I’ve probably got an entire post in me about why I resonate so much with Aqua, but I honestly think there was something in this post for every millennial out there who is dealing with the harsh realities of the world. Just think about the structure of this episode: Aqua finds what’s essentially a “dream job” for her, and then finds out that the real world experience of that dream isn’t as glorious as she expected. In fact, she finds out that the real world is actually quite scary, scary enough that she’d rather be locked up in a literal cage than go out and face it again.

Heck, that’s not even a millennial thing—that’s just what it’s like being out there in the real world. And throw in Kazuma’s musings about money and purpose in life…Konosuba is a scary show, guys.

Of course, I don’t think I’d enjoy any of this as much if it didn’t end with Aqua bouncing back from her trial like a champ. In that recovery is probably one of the fundamental elements of why I find Aqua so wondrous and relatable, but like I said, that could probably be an entire post on its own. While I still find Megumin very funny, Kazuma servicable (sakuga creepy fingers O.O), and Darkness less of a drag than expected, it’s still Aqua that makes the show tick for me. Konosuba without Aqua wouldn’t be a show I love the way I do. 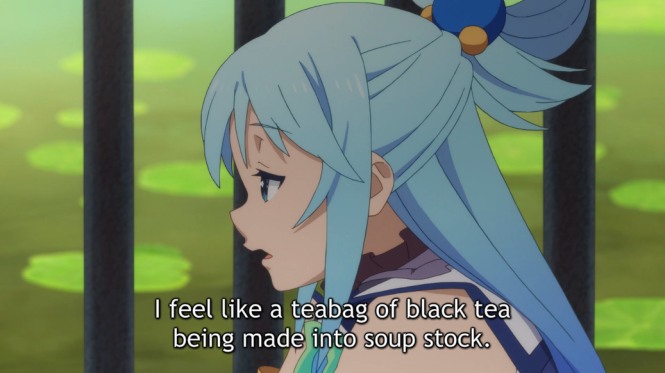 Grimgar of Fantasy and Ash was also included in the suffering tally, although my vote for it was dedicated to episode 5—and episode 6 was somewhat different in nature, although still very excellent. Of utmost priority is the fact that the OP got upgraded and now the marbles look even prettier, but the show proper continues to be extremely good in many different ways. Guy over at Geekorner wrote an interesting piece this week on Grimgar‘s direction, which actually expresses some of the things I both like and dislike about Grimgar. There’s a gentleness to the show that’s often compromised by its otaku-pandering aspects, which is unfortunate. And, as Guy says, the direction does feel oddly placed (a sentiment I expressed back when I watched the first episode in my rant about being confused by the show). Yume still best, though, and she got some chances to show it this week in her efforts to reach out to Mary.

Akagami no Shirayuki-hime is not the show I’d expect to be on a list of shows with “suffering,” but the latest arc has shown that Ando has a few more tricks in his bag for this show than we may have expected originally. Again, that vote was for a week ago’s episode—and yesterday’s episode was something different: something more like the Shirayuki-hime we’re used to seeing. The show’s base strength has always been its depiction of relationships between people who trust each other, and we got to see a lot of that this week between Zen and his attendants, as well as (from a distance) Shirayuki and Zen. Also gratifying was seeing Shirayuki return periodically to her normal, confident, and compassionate self, even in the midst of her trying situation. To be honest, I am sort of feeling that her characterization hasn’t been entirely consistent as of late, but I’m not thinking about it too hard right yet. 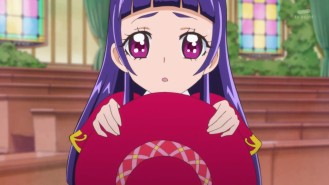 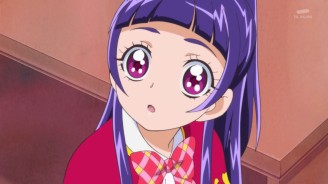 Now we switch over to the “shows with characters I compulsively screencap” category to visit Mahoutsukai Precure‘s lovely second episode and Phantom World‘s surprisingly good sixth episode (the first episode since the premiere that I’ve watch in full). MahoPri isn’t really doing anything remarkable, but the Precure formula is a solid, well-polished one, and the show is running through the tracks extremely well right now. Yui Horie is a complete Angel as Riko and the overall mood of the show seems slightly more whimsical than I’ve been lead to expect from this franchise.

Phantom World also hit a bunch of whimsical notes this week courtesy of episode director Naoko Yamada (oft referred to as “the genius director behind Sound! Euphonium“), who I’m glad got a chance to work on Phantom World‘s best material yet. Guppy still beats out Kurumi in terms of overall screencapability, but Kurumi is, truthfully, very cute and not so bad so watch as I’d expected. However, I also feel we’ve just seen Phantom World peak, and with Riko and MahoPri here I’m not really feeling the need to keep up with Phantom World anymore, even for Guppy’s sake. So it goes.

And with that, I’ve pretty much covered everything that really stuck out to me. Haikyuu!! S2 was back to its lame, meandering, focusless ways this week; Durarara!! x2‘s likewise mired back in not really doing anything significant (Mikado got a gun, okay, will he use it, probably, I guess, unless Kida stops him); and Dimension W is something I’m really only watching because I like Mira both as a cute and as a character when the show’s not treating her like crap and because the art design continues to impress despite Kyouma and the story being nonsense. Oh, yeah, and ERASED isn’t out of my doghouse yet—I cannot tolerate the way the show treats Airi. I can’t. It makes me mad, perhaps specifically because it ought to be so much better than this.

GATE seems like it might be headed interesting places, by the way, if only because Lelei seems like she’ll be taking a bigger role. And holy moley, she looks so great in her academic robes!

And I’d like to finish up this week by giving a shoutout to RWBY, which I’ve been keeping up with and not talking about. But the show does deserve to be mentioned here, because Volume 3, which finished up on Sunday, has been a tremendous improvement in basically all facets from the first two seasons. The attempts at comedy are still terribly unfunny, but in terms of overall writing, scripting, tension building, and even cinematography, this season was an obvious and significant step up from anything RoosterTeeth have managed before. I’m kind of intrigued by how big the story is getting at this point, but I have a lot more faith that they’ll be able to actually capitalize on things in a meaningful way than I’ve ever had across the show’s run. Keep up the good work, guys—I want to see you succeed and make something really good. 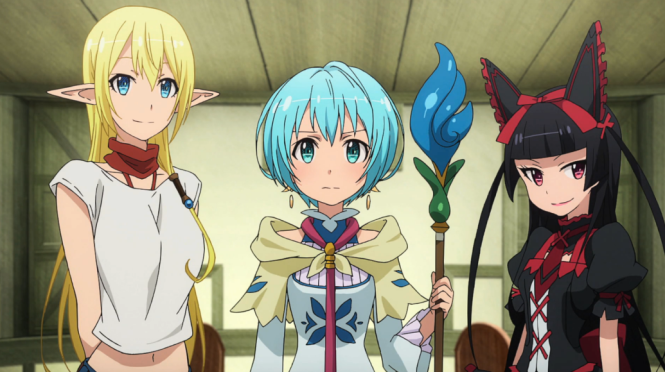