Spring 2016 was ridiculous. It’s been a long time since I’ve watched 10+ shows in a season, but this season made me do it. In addition, the top level of shows this season were ridiculous. We had basically two competing AOTS shows (fortunately, only one actually ended this season). In short, I had a whole bunch of fun—my weekly schedule this season felt like coming home each time I started in on it.

[If you want to recap the entire fall season, from my first impressions all the way through the stuff I managed to write this season, you can hit up everything I’ve written in the Spring 2016 tag!]

Perhaps appropriately for a show like this, I felt like Tanaka-kun is Always Listless kind of ran out of steam after the first few episodes. The big charm point of early Tanaka-kun was the combination of sleepy humor, neat art design, effective Non Non Biyori-like direction, and quiet reflections on friendship and high school identity. The later two of these I felt was mostly lost as the show tracked on, as things turned more towards self-contained jokes that fell flat about as often as they landed. All the characters in the show are, actually, pretty good, but Tanaka-kun never really did much with them and Tanaka’s final realization in the show’s finale felt like too little, too late. In the end, I suppose I really just prefer my slow slice-of-life anime with a bit more atmosphere to them, and Tanaka-kun never really ended up providing that, which feels like a bit of a waste.

I usually don’t rank shows that I didn’t finish, and while I technically didn’t finish Bungou (I skipped episode 8, the finale of the anime original arc), I feel like I got a good enough sense of its character from what I saw (everything else) to let it show up here. The last Igarashi show I watched in full was Captain Earth and while Bungou isn’t really much like Captain Earth, I feel it’s plagued by some of the same issues (characters feel weightless, narrative is pretty much a mess), but fortunately those issues are less an issue given Bungou‘s somewhat lighter feel. I generally enjoyed the comedy in Bungou, which also served to cushion some of the other issues by way of keeping me entertained. That same humor did feel rather at odds with the sudden violence that punctuated the show. In the end, I never did feel Bungou bridged that gap very well, but both sides were fun enough (especially after Kyouka’s entrance) that it all wound out okay! I’ll be watching season 2.

Time for moe! Sansha Sanyou‘s definitely at the lower end of Dogakobo’s comparable shows, but with a great OP and some pretty solid characters, I enjoyed it well enough. These kind of shows live and die by A) the characters being independently fun, and B) the show moving along at a good clip between bits, and Sansha Sanyou managed that quite well in Yasahiro Kimura’s directorial debut. Futaba, Hayama, and Yoko were a solid trio, and some of the peripheral characters (Kou, Sonobe, and Nishiyama) did a good job of supporting the central dynamic. Futaba, in particular, was a standout, backed by Mai Kanazawa’s astounding vocals. As always, one of the pleasures of watching Dogakobo shows was seeing some of the production quirks, like Enishi Oshima’s solo KA episode and all the cats in the show being animated on the 1’s (what the heck). Cute show, good watch. 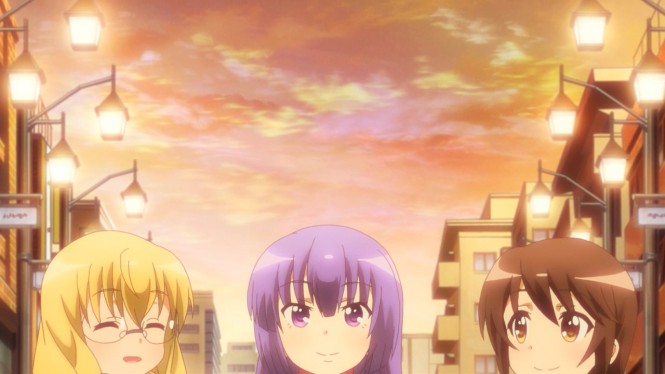 Someday, Trigger will stop being so freaking in love with itself and actually make a total complete good show in the Trigger style, but Space Patrol Luluco was not that. With flat visuals (even as a joke, they’re unengaging) and a seemingly endless chain of self-references, some effective and some much less so, Luluco often felt too indebted to Trigger’s previous works to actually be fully its own thing. And that’s a real bummer, because the core of Luluco the character’s story was great! When the narrative actually focused on Luluco’s journey (and when the show was actually animated), it was charming, fun, and even touching. Sadly, the Trigger mania never quite let the glimmer of Luluco’s crystal heart show through the way it deserved to.

I keep telling people J.C. Staff is good, but nobody listens to me. I sadly doubt Flying Witch cause any changes on that front, but I guess I can be happy it was received as well as it was. And deservingly so! Flying Witch is really good! It’s not quite in the top tier of slice-of-life shows, but it has some truly sublime moments in the matter of fact way it overlaps the mundane world and the world of magic (the first moment Makoto flies in episode one, the entrance into the cafe in the middle of the show, and the floating fish lights in the season finale all stand out as prime examples of this). I’m always a sucker for combinations of magic and the real world and the way Flying Witch does it makes it seem almost possible, almost real. That’s a special thing, and while I sort of wish the show had gone that route more often than it did, there’s probably something to be said for moderation. Would have liked more Nao, by the way, but that’s neither here nor there.

Probably the most difficult show of the season to rank on my personal scale – I simply don’t have established patterns for shows like Mayoiga to slot into. What do you do with shows like this, where the primary attractions are absurdism and formal experimentation? How do you assess that sort of thing – even on just a personal basis? For me, I ended up just coming to the realization that messing around with form just isn’t as valuable an endeavor to me as those the shows above attempted. That being said, wow, was Mayoiga a fascinating work. There was no show this season that I had more fun writing about and talking about that Mizushima and Okada’s formal shitpost, a show that could seemingly do anything and everything. It was funny, it was touching, it was tense, it was dumb. It was no Kill Me Baby, but it was pretty darn good. 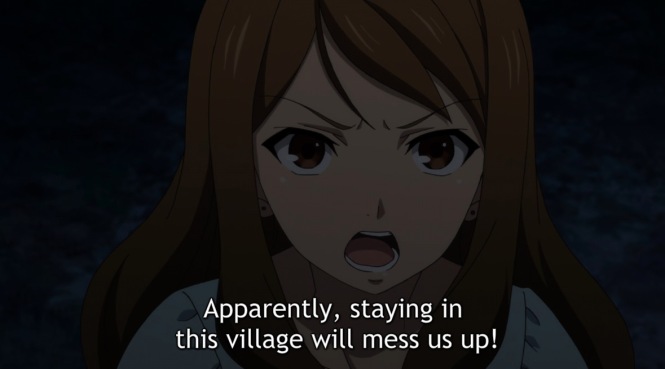 Mari Okada the anime filtered through first-time series director Hiroshi Kobayashi’s brilliant cinematographic eye was a really a wonderful thing to watch. Although I felt the back half of the show after episode 7 sort of lost touch with the things that made the first part of the show special (lighter character interactions, small moments of friendship), Kiznaiver never fell apart the way I feared it might. I suppose that sounds like damning with faint praise, and yes, there were issues like the failure to effectively reconcile Sonozaki and Katsuhira’s narrative with the “misfits become friends” stuff, but on the whole Kiznaiver is something I’m glad I watched and something I’m glad exists. If nothing else, it reaffirmed my positive feeling about Okada and gave me a promising new director to keep an eye out for. Oh, and Chidori was really cute. I wanted to give her a hug. Actually, I basically wanted to give all of the main cast hugs. And adopt them. Dumb kids, I love you.

That My Hero Academia didn’t even come close to hitting the ceiling of this adaptation’s potential and still winds up in this spot is a testament to just how strong the source material is. While the adaptation strictures clearly had an impact on Kenji Nagasaki’s ability to pace the show in a non-glacial way, he and composer Yuuki Hayashi made magic moment after magic moment in episode after episode in a way I frankly didn’t think was possible. Nagaski clearly had his finger on the pulse of what makes this manga great and to be able to tap into that wellspring of inspiration whenever the opportunity was offered despite everything blocking the way, well… it’s incredible. I cried so many times watching this show, and often it felt like it came out of nowhere. Hotly anticipating the second season and rumored increased episode count—here’s hoping Nagasaki will get a little bit more room to breath. But, for now, My Hero Academia is super solid, even if it fell short of being everything it could have been.

Despite the gap between second and first place, the scores still don’t do an adequate job of reflecting just how far ahead of the pack Concrete Revolutio‘s second season was. The first season was my favorite show of 2015, but this season was even better in a way I didn’t believe was possible. Despite being mostly episodic and only really closing out its overarching storylines in the final two episodes, Concrete Revolutio S2 managed to be emotionally impactful nearly every week – and it always had something to say. And then to cap all that off with a phenomenal windup and absolute titan of a finale… what more is there to say? This is Shou Aikawa’s baby and his masterpiece. It’s the best show of the season, potentially the best show of the entire year, and without question one of the top shows of the decade. Yes, it is that good. Shows like this are the reason I keep watching anime season after season. 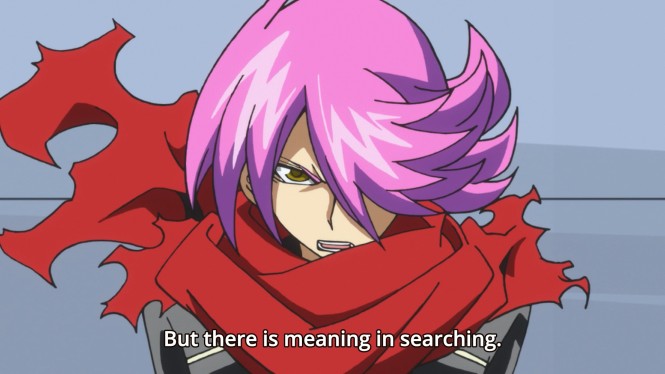 And so, we move on to the summer season, carrying presumed AOTS Macross Delta with us (Macross Delta is stupid good, by the way). The way things are looking right now, it’ll be another busy season, but I’m hoping for a slightly better spread of values this time. We’ll see! Anime almost always seems to have some sort of surprise in wait for us each season!