The sad truth: not all idol shows can be Macross. On the other hand, this is in defense of Love Live! and Love Live! Sunshine.

Love Live! Sunshine has taken some flack this season for its penchant for references and throwbacks to the original series. I think this is unjust, as I’ve said elsewhere, but in doing so I must also confront my own bias—that is to say: I love Macross, a franchise that is perhaps unrivaled among anime franchises for love of its own self, despite Kawamori’s freewheeling approach to canonicity (at least I see it as such) and reinterpretations of individual narratives.

In other words, what Love Live! Sunshine is doing is neither out of the ordinary or new. It is only, perhaps, something that stands out because of the closeness of its references to the progenitor show (mimicking visual jokes like the Kotori photobomb and the recycling of the impending school shutdown plot). That it should be criticized for this, even on the potentially justifiable grounds of such moments being nothing more than crass business-driven decisions, seems overly cynical to me.

Indeed, I would even go so far as to argue that the ways in which Sunshine references the canon of its universe are thematically integral to the work itself, elevating both it and the original Love Live! in a way that reminds me of how both SDF Macross and Macross Frontier improve on each other. While the relationship I’m describing here isn’t mutually dependent (any of these four shows can exist and succeed on its own merits), it is one of mutual benefit and enhancement. Narcissistic? Certainly, but I like a bit of ego from my anime. You don’t get much more ego than a show putting its own title up on an in-universe screen and using that as a motivation for its protagonist. 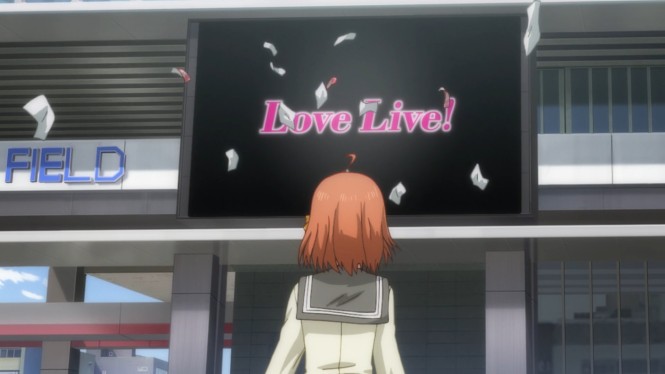 On purely thematic terms, Sunshine is deeply indebted not only to the previous show’s plot but also to its hyper-reality method of storytelling and characterization. One of the common threads running through the inevitable comparisons between Sunshine and its predecessor is the sentiment that Sunshine is more effective as a character drama and grounded narrative than the first Love Live! and with this I’d agree completely. I’d also even agree with the corollary idea that the Aqours girls are more traditionally solid than the μ’s idols.

Despite this, I would argue that the very groundedness that makes Sunshine praise-worthy is fundamentally rooted in the relative fantasy of the original show. It is made clear in the early episodes of Sunshine that Chika was inspired by μ’s in her own quest to become a school idol—and here is where the rather archetypal nature of the school idols from Otonokizaka becomes important. To use a notable example, Honoka Kousaka is less a proper character than she is a force of nature (sometimes literally). Particularly for those of us enlightened enough to understand that Honkers is the best Love Live, this is important because it means she is able to truly embody the essence of an idol’s inspirational power. Honkers blows away rain and inspires high school girls who live on the coast.

The other μ’s girls follow in a similar pattern—which, I think, is at least one of the most important factors to the show’s success. The archetypal nature of these idols means that they are somewhat malleable (see the boatloads of fanart and fan fiction devoted to them), and also somewhat abstract. In fact, it’s because the original Love Lives were not particularly grounded characters that they’re able to easily inhabit the elevated world of idol stardom. The success of μ’s within Love Live! is something of a fairy tale, a dream. It’s legendary, made all the more so by the group’s disbanding—the transient nature of it all and the dissolution at the peak of success allows their legacy to live on as an ideal.

This all slots back into Sunshine because the show doesn’t have to convinced us that μ’s would inspire Chika—we already understand the aura of glamor and inspiration that she’s attracted by. We have witnessed with our own eyes that ideal (remember “Snow Halation”) which is at once bright with radiance and dim because of its distance. But idols don’t need to inspire other idols (with the notable exception of rivalries, but those operate in a different mode); it’s much more meaningful when heroes inspire ordinary people onwards.

In creating characters more grounded that those in the original series, Sunshine sets itself up as complementary to Love Live! It’s because Chika is really just an ordinary girl that she can be inspired by a figure as archetypal and fictional as Honoka Kousaka, Rain Goddess.

There’s a shot in episode 8 of Sunshine, as Chika and the rest of Aqours are dealing with the utter defeat suffered at their first competition, that sums up this dynamic perfectly. Chika, in her room alone, looks up at the μ’s poster on her wall, a poster we’ve seen since the first episode, and stretches out her hand towards it. At no other moment in Sunshine is the difference between the “real” world of Aqorus and the “fanasty” world of μ’s so explicit and so deeply felt. μ’s didn’t succeed instantly, it’s true, but the construction of the original show is such that their triumph was never really in doubt. Not so for Aqours. We, of course, know they’ll eventually rise to the top because duh, but in this moment it truly feels as if Honoka and co. are impossibly out of reach for Chika and her friends. Chika is no Rain Goddess (hell, when they arrive at the shrine where Honoka blew away the clouds, there’s already a pair of school idols there with weather powers). 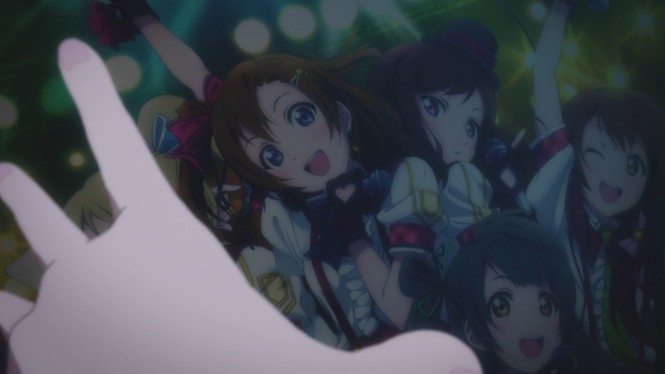 To return to the opening, then, these concerns about Sunshine‘s throwbacks to Love Live! don’t concern me because I see them as demonstrative of the sequel’s self-consciousness about where its coming from and where its going. Ultimately, Aqours wants to follow in the footsteps of μ’s. But μ’s must first exist as something both achievable and impossible to enable this. This superficial overlap is just the obvious conclusion.

The Frontier effect that Sunshine has on its ancestor is that Love Live! now is not only a fun show, but also one that carries additional thematic and franchise import. You could conceivably have Love Live! Sunshine without Love Live! School Idol Project, but the ideal Chika is driven by could never be as real as it is in this scenario. Thus, the original show is invested with gravity because it informs the effectiveness of the sequel (and, yes, I consider Sunshine a franchise sequel in the same continuity) while that sequel likewise is more valuable because it provides this effect. Both shows benefit from the existence of the other.

I mention Macross because I’ve not yet experienced any franchise that is so in tune with the way shows within its canon, continuity, and universe apart from continuity, can have an enhancing effect on each others’ value. Freyja vocalizes homage to Minmay as part of her desire to join Walkure, certain moments in Frontier take on double layers of emotional significance because they’re overlaid with the power of scenes from SDF, etc. All of these distinct experiences within the franchise build upon each other. Sunshine is doing the same thing, because when we hear “START:DASH!!” in episode one, we are not only witnessing Chika’s moment of idol genesis, but reliving μ’s. Excellent. Ranka approved (she should know a thing or two about being inspired by an idol).

18 thoughts on “Love Live! Sunshine, Macross, and the Resonance of Franchise Lore”