You thought I’d forgotten about recording my final first impressions of the season? Worry not; they are here now that I’ve hit my arbitrarily self-imposed quota of watching 15 premieres. No more. I’m done. There’s plenty of good stuff already! 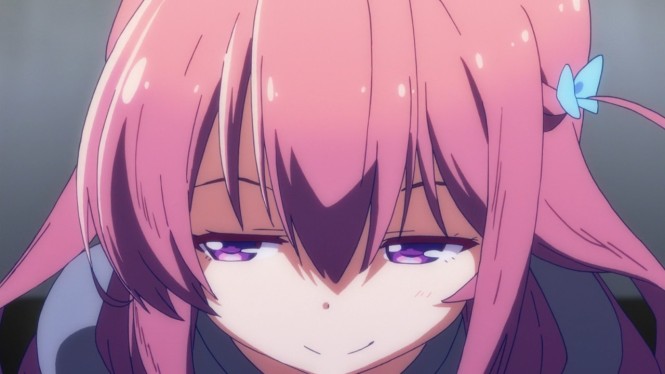 Okay, I suppose I’m cheating a bit here since I’ve actually already seen the first two episodes of Flip Flappers, but since they’re probably about equally representative of the show I’m saying it’s okay. Those who follow me on Twitter know that Flip Flappers was easily my most anticipated show leading into this season, thanks mostly to what’s liked the best PV for any anime ever. That, combined with obvious match of aesthetic sensibilities between me and the show, set my hopes high—and I’m rather glad they weren’t immediately dashed.

Flip Flappers is just kind of a quirky, colorful, light-hearted adventure story. There are obvious moments of drama and darkness, but, frankly, the show’s not quite weighty enough to make any of those less positivist aspects deeply affecting due to its rather barebones writing. That’s not a knock against the show; it’s merely to note that the show’s priorities are definitely coming from a particular place and that this place isn’t necessarily one we anime-watchers adventure into often. If I’m being totally honest, I’m perhaps just a bit worried about this, but the ride’s been wild, funny, and pretty enough so far that I’m gonna take Papika’s surfboard as far as it’ll take me.

Buckle up with Paprika and Cocoa for some Floop Fluppers! 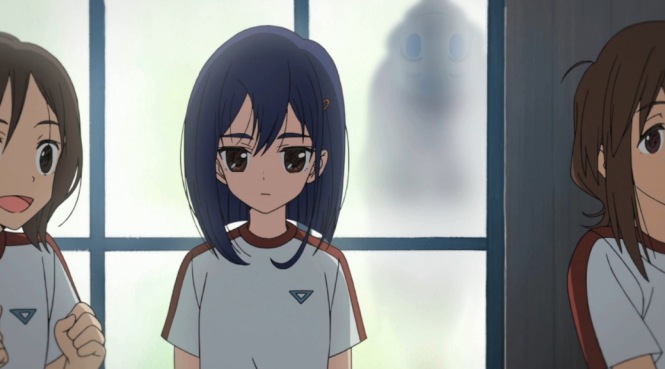 I was talking in an earlier post about how good of a title Lostorage Incited WIXOSS is, but March comes in like a lion make be the actual best title of the season. While it’s a pain to type out and use possessives with, it also feel distinctly weighted to me in a way that just feels really good (and that I don’t get from Sangatsu no Lion since I don’t speak Japanese). The name’s also quite appropriate, as this sense of an unavoidable blow impending runs through the best parts of the show, like the first half of the premiere.

So, about that premiere. On the whole, I found it a rather disjointed venture, with a compelling first half that manipulated visual cues and played with sound and silence to construct a really personal look at Rei’s emotional state despite the inherent detachment created by using such techniques. The second half was weaker, due mostly the the fact that it adopted an almost hectic mood that overstated the contrast between his life alone and his life with this family. That being said, this material is clearly top-tier stuff, as the moment when Hinata puts the blankets over Rei and sees him crying in his sleep. Even the unfortunately less-than-perfect direction can’t completely hamstring moments like that.

I’m hoping for the best, but bracing myself for the most unfortunate outcome: mediocrity. 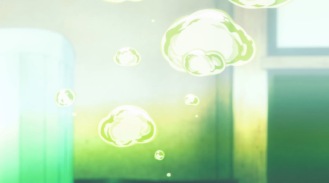 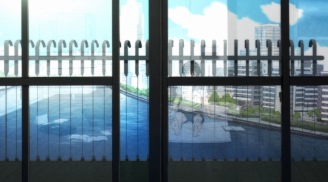 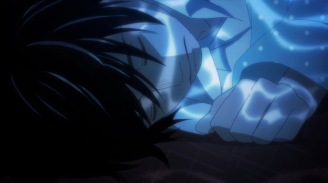 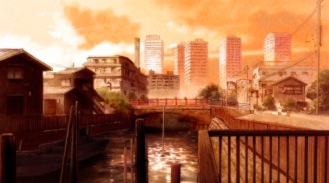 Snark and sick burns, the anime. Everyone’s in the firing line—seiyuu, directors, writers, the audience, the industry, the characters. Which is all fun and good, but I’d be fooling myself if I said I didn’t find myself at least a little tired of all the owns getting thrown around. Thankfully, there were some more genuine moments—the the unadulterated joy in Chitose’s eyes when she realizes she’s been cast in the lead role—scattered in amidst all the sarcasm and sass, but at times I just felt like Gojou, shaking my head watching a show perhaps just a little bit too in love with the idea of landing the next clever zinger.

That caveat aside, there’s lots of other stuff to love about Girlish Number. All the characters (yes, including Gojou) are attractively designed to the point of throwing me for a loop when comprehending seiyuu designed as anime characters being played by seiyuu, Chitose’s bratty personality makes her a ton of fun to watch, and the show’s got a bit of a visual identity despite the over art style being dominated by grays. Whether or not all that will add up to a show that’s willing to infuse enough vulnerability into its snarky premise remains to be seen, but I’m hoping for the best.

I like the potshots, but this show has to be more than that to keep me. 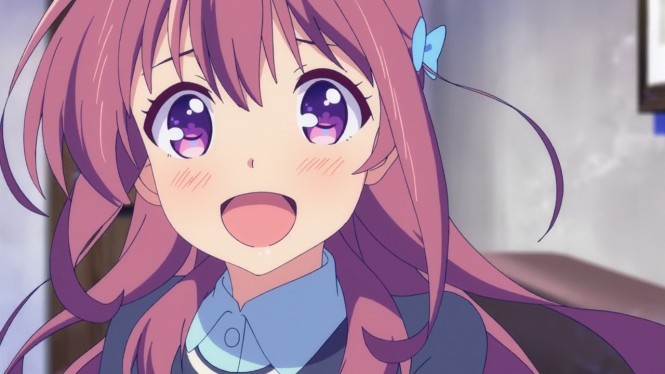 Definitely the oddest premiere I’ve seen this season, but a massively engaging one nonetheless. “Rad” was the word stuck in my head when I finished Occultic;Nine‘s premiere and while I’m not super confident that being rad will be enough for the show to get me on board for an entire season, it did make for a wild ride. Something like a cross between Baccano! and Monogatari, although certain far more juvenile than either of them (not to exonerate Monogatari of its own faults too much). Yuki Kaji yelling his head off was what initially got me hooked on the episode—I don’t know why—and then the torrid pace the remainder took kept me until the very end.

The frenetic delivery was key here; without the speedy pacing and rapid dialogue, the base elements are so unimpressive that I suspect I would have checked out long before the end of the episode. But as it was, something about the episode’s lead foot kept the numerous tropes and, uh, less attractive elements from grating since they were conveyed with such energy (and with such brevity). I realize that doesn’t exactly speak well, but the appeal here is most definitely not nuance—it’s the simple adrenaline of pumping a hyperactive cast and weird events through the screen into your brain. Does that make it good? I dunno.

I have no clue if I’ll watch the second episode or not. 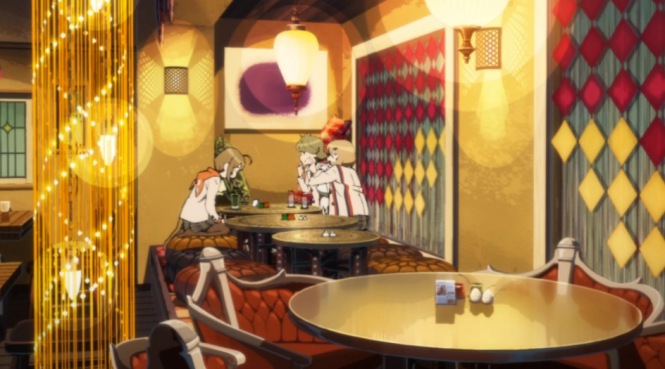 On the complete opposite of the spectrum from, like, all these other shows is The Great Passage. Some words: immersive, delicate, sensitive, intelligent, dignified. Not grand, but thoughtful and deliberate and steady. It’s shows like this that make me grateful I have tastes that aren’t stuck to just one kind of anime, because the quiet nobility of this show is something it just feels good being able to appreciate. I’ve liked and loved a number of the premieres this season—The Great Passage may be my favorite of them all.

So, why? I think the origins of it all rest in the same sort of basket as Showa Genroku Rakugo Shinju resides in—particularity. It’d be tough to pick a world more esoteric than that of dictionary writing and editing, but the limited scope of that premise means that The Great Passage is empowered to dive deep into that world and is almost required to have specific characters to inhabit it. None of the leads or side-characters in this show are flashy, but they are substantial in a way that manifests itself in things like body language, manner of speech, and even basic interactions with each other. The world of The Great Passage may be limited by its specificity, but it’s also full and deep. Oh, and the show’s audio-visual direction is immaculate, too. No big deal.

If The Great Passage isn’t available in your region yet, scream at Amazon until it is. 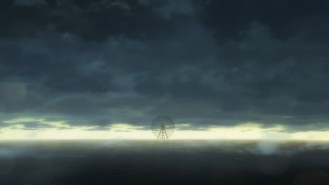 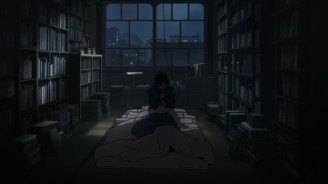 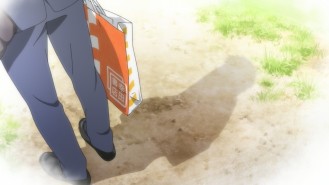 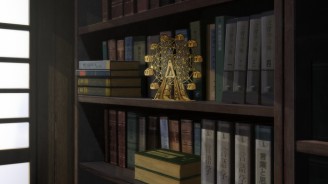