The war between humanity and monstrosity rages.

With the engrossing totality of atmospheric emotionality somewhat diminished in Kizumonogatari‘s second installation, Nekketsu, a more traditional (but no less fascinating) central element takes its place. As Araragi fights and flirts his way to the end of the film, he and his successively more powerful and more quickly dispatched opponents make inverse progressions along the path of humanity.

To spell it out clearly, we can look break down each of the three confrontations (VS, as the film’s text cards put it) by the nature of the combatants at the time.

Of course, the details of how these iterative contests play out vary. Further, the progression of the vampire hunters is far more clean cut as they are, as is expected, static individually. The move from each state is in clear halves of identity, while Araragi’s evolution happens in fits and starts. Furthermore, it could even be argued that for Araragi the key piece is less his actual identity and more his intent to be either human or monster.

However we read these top level assessments, though, each battles is complicated with multiple layers of reversal and meaning via the characters’ personalities, philosophies, and actions. The irony is delightful, although the main arc remains the same. 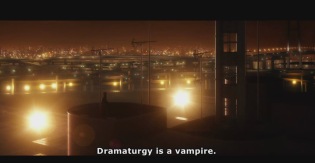 Despite Dramaturgy being a vampire by nature, he is by far the most human of the three enemies Araragi faces—so perhaps this is really a fight between two humans. Dramaturgy is controlled, sober, honorable, and sensible (his name, which refers to the theory and practice of dramatic composition, is similarly dignified). He surrenders when defeated, offers reasonable terms, begs for his life. Hunting vampires, for him, is a job, and the human mundanity of such a motivation means that when the vampire is vanquished, Araragi’s triumph feels just a bit empty.

On the other side, Araragi (although certainly a vampire) begins seemingly human, lacking any special powers or competence that would mark him as the monster he’s later become. Of course, this changes quickly as he discovers his regenerative abilities and his incredible strength, but in terms of intent, Araragi still believes and is motivated by his desire to return to being fully human. In this case, the irony is that the Dramaturgy fight is balanced against Araragi’s first conversation with Hanekawa, in which he enacts his foolish ideas about human strength by trying to sever ties with her. In doing so, Araragi personally pulls away from a truer sense of humanity.

The sum at the end of the battle, then: Dramaturgy (vampire by nature and human by persona) is defeated by Araragi (human by intent whilst moving a step close to a vampiric nature and definitely acting less than truly human in relationships).

The midpoint, and things begin to move in halves.

Unlike Dramaturgy, Episode’s motivations for hunting Kiss-shot are personally motivated, and the hateful passion (against his own blood, against vampires, against humans) that drives him places the personal impression he gives off somewhere between a human and a monster. While his emotion is understandable and he takes a human form before Araragi, the insane drive the propels him makes him seem almost demonic and, ultimately, he is shown to be a creature of the mist.

Meanwhile, Araragi, now more equipped and familiar with his powers, balances between the two. The primary pivot here is Hanekawa in two ways. First, this fight follows their second conversation, in which the two of them make-up following their previous fight and agree to be friends. Araragi would say his strength as a human is thus being diminished, but in terms of what truly makes a human, he is slowly growing (although perhaps not all the way there). Second, Hanekawa’s near-death also pushes Araragi to the point of rage where he nearly kills Episode with his bare hands—with only Oshino’s sudden appearance to stop him. “If you continue, you’ll never be able to go back to being human,” Oshino says. Rather than a statement of nature, Oshino is pronouncing a warning against the invisible lines humans must not cross to preserve their souls. The principle is different than that of Araragi’s growing vampiric powers, but the language (as might be expected of Isin) is the same.

Lastly, to save Hanekawa and thus maintain his most “human” link, Araragi must drive further into his inhuman abilities. It’s a shame this film wasn’t the one named Tekketsu since the ironies are so prevalent.

It happens in a flash, the transition from being human to being truly monster.

“Mission.” This description of Guillotinecutter recalls that of soldiers (yes, he’s a priest, but Episode is the one who carries a cross)—follow orders to accomplish the mission. Although Guillotinecutter is entirely human by nature, his use of Hanekawa as a hostage and his contempt for her life (which exceeds Episode’s) violates the warnings that Oshino gave Araragi. In short, this human is actually the least human of the three vampire hunters.

Araragi is forced to respond in kind. “Give up on being human,” is Oshino’s advice, a painful proclamation when this final battle follows the third and most genuine of Araragi and Hanekawa’s conversations; that is, Araragi has finally become fully humanized through his friendship with Hanekawa. But, as the outpouring and visually stunning depiction of his powers indicates, he must abandon his human nature to preserve his humanity. And he must do so while moving inverse of the human he’s fighting. Where Guillotinecutter is monstrous despite being human, Araragi becomes most fully human while accepting that he is a vampire. He becomes a monster to protect the symbol of his new-found humanity. Thus, the progressions are completed and the film ends.

Life is something precious in this film, as is death. They are symbols of humanity. To respect life is human, to violate it is the act of a monster. In reverse, death (or, more precisely, the ability to die, is tied to humanity). The human-like Dramaturgy retreats because he values his own life. As Shinobu regains her vampire powers, her immortality returns as well. And so on. And so forth.

In that sense, I suppose “hot-blooded” is correct, after all. Bleeding is a signal of nearing death, thus is a symbol of humanity. The most graphic outpouring of blood in the film comes from the girl whose actions are small, mundane, and human. Hanekawa brings clothes, makes sandwiches, teases. And she bleeds. Because she’s human.