A feeling somewhat more demure than that of the tail end of a mecha’s thruster exhaust. 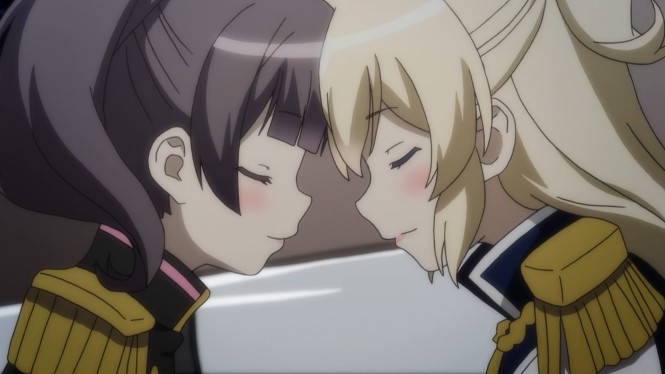 This post is the tenth of my entries into 2016’s rendition of the 12 Days of Anime aniblogger project. For more about the project, read appropriant’s introductory post. For a spreadsheet containing the work of all the bloggers participating, go here. For my previous 12 Days posts, go here.

To be honest, I initially gave Regalia: The Three Sacred Stars a spin because I thought the key visual looked cool. Having not had much of a history with the loli-mecha (or is it mechaloli?) subgenre, the superficial appeal points were simply that I liked the character designs and that I liked the robots. Additionally, with the majority of mecha series I’ve seen having featured robots piloted by boys, I was also rather thrilled by the prospect of girls being allowed to pilot the robots (in that respect, I was not disappointed).

What I wasn’t really expecting from Regalia was just how emotionally warm this little show would end up being. The primary relationship, as the header image suggests, is between two girls—one a young empress and the other a human incarnation of a deity-like robot thousands of years old. Sisters. And while such an arrangement might have been played for a certain kind of teasing appeal, Regalia simply values a plain, simple sibling bond. There is a frankness and honesty, despite the small misunderstandings and miscommunications that arise, to this relationship that make it a rock solid core for the show. It is straightforward, and in its uncomplicated depiction of Rena and Yui’s sisterhood it possesses a gentle warmth.

This warmth is, for me, the defining feature of Regalia: The Three Sacred Stars, above even the show’s devotion to 2D robot fights—and it extends beyond just Rena and Yui. Many of the other relationships in the show are characterized in a similar way: Yui and her advisors, Retty with Sara and Tia. There’s a sequence in episode 7 where Yui and company end up camping out in an abandoned camping store, enjoying the simple pleasure of being in each other’s company even though they’re currently fleeing from their enemies. It’s an oasis of fun in the midst of worry, and a moment in which the genuine affection the characters have for each other shines through. It’s because Regalia takes the time to allow this moment to happen that the warmth, rather like that of a campfire surrounded by friends, spreads slowly out.

A step further along, and we find that Regalia approaches its villain, its (rather suddenly prominent) themes, and ultimately its conclusion in the same way. Which the fate of the entire world hanging in the balance, Yui and Rena continue to fight to pass along their hopes and values to a new generation of humanity. A long-dormant robot being sides with them, and with their belief that humanity can be stronger together. Nothing earth-shattering, nothing stunningly original. But it’s enough that it’s all delivered with calm and steady belief, this small warmth of human relationships and faith in each other. Regalia is not really a dark show, but even so the feeling it conveys is rather like that of a tiny candle burning in the night. It’s comforting warmth. And maybe it feels that way because it is honest and familiar more than it is grand or sweepingly hopeful. That’s enough for me.