It’s no fun if you don’t stretch the concept just a bit.

This post is the eleventh of my entries into 2016’s rendition of the 12 Days of Anime aniblogger project. For more about the project, read appropriant’s introductory post. For a spreadsheet containing the work of all the bloggers participating, go here. For my previous 12 Days posts, go here. It is also my entry for this year’s Anime Secret Santa project, which you can read about here.

Christmas Eve is nearly over, and the world eagerly awaits the coming of the savior. For years now in Advent homilies, I’ve been hearing from priests about how Advent is a season of anticipation, a time of waiting, hoping, and anticipating the moment in which God humbled himself and became man. The idea of waiting is key—we know what is coming, and it’s up to us to make the most of the time in between the present moment and the arrival of the King.

The original Mobile Police Patlabor OVAs make use this same idea. Although the sources of the waiting are different—bureaucratic red tape, simple inconvenience, or just the normal in-betweens of life—the characters in Patlabor spend a great deal of time simple anticipating something they know is coming but have no power to make arrive. The intervening time is thus a human mess of confusion, boredom, occasional impulses toward self-improvement, and the slowly mundane chaos of life.

But anticipation, the hope for (or, perhaps anxiety over) what’s to come is the key. With Christmas, it’s the thrill of knowing the Savior will soon arrive for us to celebrate. For the members of SV-2, it’s the excitement over the arrival of the new Labors in the first episode or the boredom of being off duty in the second. But, for both, the time of waiting eventually gives way to the moment of action. The birth of Christ. The next turn of events or need for action. Either way, man must stand watch and remain alert. Salvation lies around one corner; finishing the job around the other. One is eternal, one temporary—yet each has their proper place. 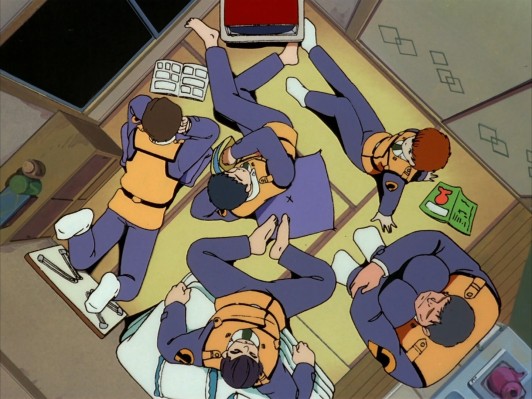 One thought on “[2] -patlabor: anticipation-”