I’ll be publishing my list of my favorite TV anime of the year after I finish up with a couple of final shows, but while we wait for that to happen, I thought I’d share some of the great individual scenes that stayed with me this year. Some of these are from shows that will inevitably be on my year-end list; some are not. Regardless, they all made an impression on me for various reasons, and I wanted to share them with you!

Honestly, it’s pretty hard to pick out a single scene from among Konobi‘s trademark sunset-washed sketches, because they’re all really great (enough so that they were part of the inspiration for an entire post). But among them, the standout is what I’ve come to affectionately call “The Rain Scene” from episode 10. These scenes are all a treat of audio-visual harmony, but this stand-out catches my attention most because of its utter simplicity. The story affectations are limited, and so instead it’s the craft of Kei Oikawa’s lighting choices, Ryo Araki’s lovely character animation, Gin’s music, and Nao Touyama’s cheerful vocal performance carry the whole scene in unison—and with significant charm.

Moa’s been my favorite character in Show by Rock!! since the show’s first season, her radiant smile, pyurus, and general cheerfulness in all situations winning me over. In season two, however, we found out she was also a space princess, and in a moment that was not telegraphed even in the slightest, she suddenly appeared dressed in her royal clothes—complete with shoujo sparkles everywhere.

I literally paused the episode and walked around my apartment for a few minutes, I was so overwhelmed. With some simple magic, Show by Rock!! managed to completely convey to me the sense of surprise Moa’s friends displayed after seeing her like this. It was just so abrupt, and with her being my favorite character, there was a whole different level of joy to it—something like, “Yeah. She should be a princess.” Except more excited. 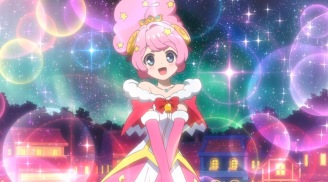 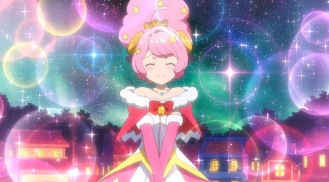 D.Gray Man Hallow was a miracle existence all on its own, but having it being emotionally devastating after not having watched any of it for three years and barely remembering most of the prior plot beyond vague outlines was more than I could have hoped for. And Kanda and Alma Karma’s arc aside, the real heartwringers in D.Gray Man for me have always rested with Allen. Allen’s just such a solid protagonist for this show, torn between two worlds, loyalties, his painful past and painful present—and handling it all with such grace and kindness. His friendship with Lenalee, as well, has always been a core part of the experience for me, so to see them embrace each other before Allen leaves Lenalee heartbroken over his departure was just… a bittersweet reward for the time spent.

I’d liked Aqua for most of Konosuba up until this episode, but it was with episode five that I really felt like her character was finally expanded for me to truly understand—and, as you all know, I sort of found myself in her excitement about finding a quest that was perfect for her and the ensuing disaster.

“The world outside the cage is scary.”

But, I think it’s also important that I note it wasn’t just Aqua’s despair inside the cage that resonated with me. Sure, the existential dread of the world is something I feel rather acutely now and again, but it was the rapidity of her recovery upon being reminded by Kyouya that she’s a goddess. “That’s right! I’m a goddess!” she exclaims, and suddenly the world is bright again. The sudden recovery, the instant filling of the (possibly unfounded) self-esteem hit points is something I relate to as well. I’d never seen anything like that in anime before, and it’s stuck with me the entire year. 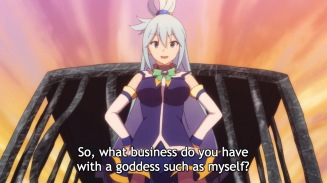 I cannot tell you how many times I have seen the preview special episode (the first 0.89 of the real first episode) of Macross Delta. I only know that it was many. The whole episode is one long ride of excitement and joy for me, and while picking out a specific moment out of all that Macross-y goodness is difficult, I don’t know if there’s anything more iconic to me that Freyja hearing Mikumo humming in the face of a war and the Walkure descending from the sky. It helps, too, that “Love! Halation the War” is the best song to come out of Delta (and is one of the franchise’s all-time bests, for that matter), and that’s ultimately what pushes this moment just ahead of war goddess Mikumo bursting from the rubble to the introductory horns of “Ikenai Borderline.” It’s showtime!

Speaking of characters who hit an unusually poignant personal note with me, insecure supervisor Kou from New Game! is one that really stands out for me. If Aqua was a character who resonated with a darkly interior part of me, then Kou is something more like the outward professional part of me—the part that does its full-time job well, is friendly and cheerful to coworkers and customers alike, and is also plagued by self-doubt. Thankfully, I’m not having to supervise a team like Kou yet, but I’m no longer a newbie like Aoba either. And so, Aoba’s affirmation of Kou in New Game!‘s finale felt rather like an affirmation of me. Sure, Kou and I are just kind of muddling through our responsibilities the best we can, but we’re doing a pretty good job!

You could probably fill a list like this with moments from Concrete Revolutio—it’s just that kind of show. But out of all those episodes, episode 5 is one that stands out in particular for its take on superhumans and children. Although Conrevo is constantly battering the idea the good and evil are mutually distinct categories, it also values the innocent worldview of those who don’t know any better: in particular, children. The Human-man’s quest to be a superhuman for his daughter and Jiro’s decision to protect that quest, to protect the child’s belief in the purity of righteousness, are powerful affirmations of value of children as our moral compasses. Even if we can’t truly be the heroes of justice they deserve, we can still fight to uphold their innocence as something good in and of itself. 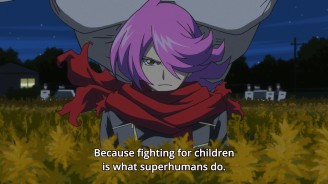 I’ve mentioned this sequence briefly before, but in episode  of Regalia: The Three Sacred Stars, there’s a respite amidst all the robots fighting when four of the characters—Yui, Rena, Sara, and Tia—all find themselves in the empty city of Rimgrade and wind up having a little campout inside an abandoned camping goods store. There, they do all the things you normally do with camping with friends, they have a fire, cook some food, and talk and laugh together. You might argue that the serenity and coziness of this scene is misplaced in the midst of the rest of Regalia‘s plot, but taking a break just to let the moment breathe is something emblematic of what I found so delightful about this show. We can have good robots and quiet friendship in one show; thanks, Regalia. 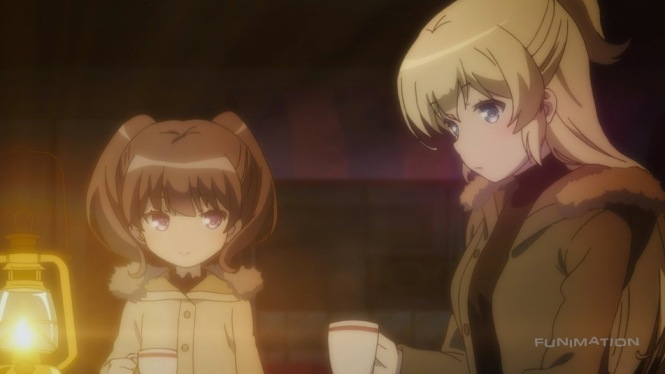 Am I cheating, using this quote again? If I am, I don’t care, because I just can’t let this moment go. Rather like the first video in this post, I never seem to get sick of rewatching this clip. Over and over and over again, it never gets old. In emotional terms, the end to Koyori and Kururi’s match is Takkyu Musume‘s peak, but it’s also just an absolute triumph of animation adrenaline between the pumping EDM soundtrack, the fiery animation, and all the yelling. And don’t even get be started on the genius of using the baseball bat sound effect for Koyori hitting the sweet spot on her paddle—in the midst of all the other noise, it rings out like a bell over a din and you know it’s perfect.