Without question, this is the definitive take on the season.

Let’s not bury the headline—I finished exactly three shows from this season. We’ll get into my thoughts on each shortly, but as those of you who have been following me for a while know, this was a fairly big shift in my relationship with seasonal anime. This upcoming spring season will mark the start of my fourth year following simulcasts, and up until last season I had been watching anywhere from 8-15 shows a season. Of course, those numbers had been trending downwards, but still—to go from 8 shows a week to a mere 3 (and not often watching things the day or even the week they came out) was… well, it was different.

I’ve got a post in the works about the changes I’ve been making in the way I watch anime and the reasons for those changes, but we’ll leave that for another day. For now, all you need to know is that while I only finished 3 shows, I did sample a pretty wide variety of things that I’ve got thoughts on. I’m not going to be ranking things or doing awards as I have in seasons past—with only three shows, such ceremony seems rather misplaced.

So enough spinning our wheels, let’s talk about some Winter 2017 anime!

I suppose it makes sense to start with my favorite show of the season, director Shingo Natsume’s ACCA. I wish I could remember back to the start of the season and what I thought of ACCA before the first episode aired, but I just don’t remember. Maybe it’s because the show was more of a speculative pick that anything for me to start, but the first episode blew me away with its slow-paced and effortless sense of style.

While the show as a whole didn’t manage to keep up visually with the excellent opener and best-of-the-season OP, it did manage to find some other strengths to lean in to. Liborek’s coverage of the show over on the Sakugablog highlights some of the reasons the show’s visual quality was so inconsistent (heavy storyboarding duties on one staffer, a ton of outsourcing), but it was nice to see that overall the production issues never overtook ACCA‘s core strengths: 1) the compelling relationships between many of its characters, 2) the general human cuteness it put on display, 3) the richness of its world, and 4) the well-handled slow burn of political intrigue. 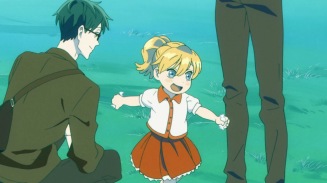 Perhaps more than any recent show I’ve seen, ACCA was fascinating for its depiction of various relationships. Jean and Lotta had their comfortable dynamic; Jean and Nino’s genuine affection and care for each other stood out; Nino and Lotta were charming to watch together; Jean and Mauve were riveting as a couple (a ship I was both totally okay with not sailing and also crushed over); Mauve and Grossular’s mutual respect was super neat. Et cetera. And that these relationships and love and loyalty of a human, familial kind ran alongside their political parallels in a kind of beautiful synchronicity made the experience all the richer.

In the end, ACCA left me really satisfied. As great as the cute interactions between characters (and their food lol) were on an immediate basis within the show, the way things pulled together emotionally (like in episode 8) and plot-wise (in episode 12) was immensely gratifying to watch. Whether it was the revelation of the backstory that tied all the characters together or the sheer rush of watching Jean and co. turn the tables on Lillium at the last second, ACCA was beautifully crafted as a story. When I finished the final episode, I felt full, like I’d just eaten a satisfying English muffin and finished a cup of tea (a ritual I actually completed with over half of the show’s episodes—it just put me in that mood). That’s a good feeling to walk away from a show with. I’m glad I watched it. 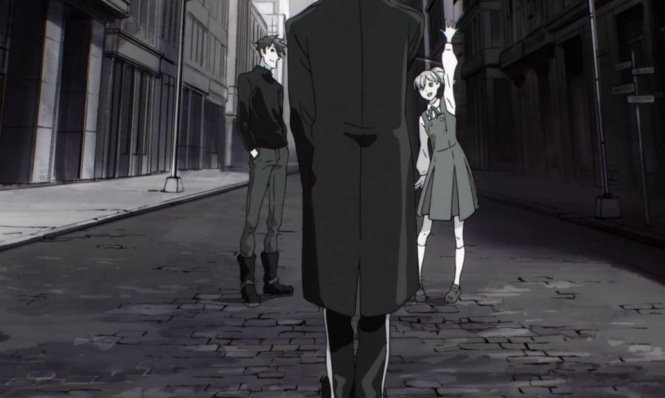 Speaking of things with satisfying endings, how about the finale of Konosuba‘s second season? Kazuma a pile of bones and Aqua lauching a final boss character into the sky with a magic-fueled uppercut? Seriously, what more could I ask for?

That’s more of less to say that Konosuba delivered more or less exactly what I wanted—and expected from it this season. The stuff I didn’t like about the first season (ecchi stuff, Kazuma being gross, Kazuma getting to take most of the heroic planning stuff credit) was still there, and the stuff I liked (Aqua) was still there too. Did anyone else noticed that the quality of the episodes seemed to go up and down proportionately to Aqua’s screentime, or just me? Well, this is notice to all you who didn’t realize this, so now you can go back and watch this season with new eyes. Lucky you, you will be able to experience the full glory of Aqua clapping for fishes.

Incidentally, I found even more things this season to relate to Aqua with. Everything else about the Axis cult aside (yes, I’m cherry picking), it was pretty darn cool to see the way Aqua responded with such benevolence to her followers even though they treated her like crap. I mean, sure, they’re directly linked with her goddess powers, but still… seeing the lengths our beloved selfish goddess would go to for the people who worshipped her (or their image of her lol) still was neat. As I’ve said before, Konosuba‘s appeal for me lives and dies with Aqua—it was good that it went out on a pro-Aqua high.

And then we have Hand Shakers. Yes, I finished it. I watched every second of every episode (except the OP/ED, which were eminently skippable and not at all necessary to setting a mood for the show). It was bad, as I expected, but I don’t regret watching it. If nothing else, it’s been a while since I actually finished a show I could rate a 3/10; the bell curve of my MAL rankings was starting to get out of whack.

As you may recall, I wrote a piece early in the season “defending” Hand Shakers‘ visual choices. The thoughts I expressed in that post regarding the fascinating prospect of seeing a show place pursuit of a particular aesthetic before all over values—including coherency—still hold true, although I’m sad to report that Hand Shakers largely settled into a kind of complacent expression of that aesthetic as the show wore on. That was a disappointment for me, and I’d have to say that K will probably remain the definitive GoHands-style anime for me going forward.

So what about Hand Shakers‘ story and characters? Well, the story pulled a last-second spin and lots of the characters were either yucky (the incest siblings) or grating (Makihara-sensei) or just plain uninteresting (Kodama Awaza, in a tragic waste of an idol character). But there were still some that I wound up liking, particularly Chizuru and Hayate and their affectionate, almost pseudo-parental friendship with Koyori and Tazuna. The latter pair wasn’t anything exceptional and bogged down by Koyori’s nearly show-long muteness, but even so I felt there was a enough of a kernel of a well-intentioned effort to make their relationship feel genuine and sweet that I found them pleasant to watch. (Also, it had the best episode titles of the season.)

In summary, I absolutely do not recommend you, your friends, or anyone else watch Hand Shakers. It is not a good anime, and at its worst it is disgusting and offensive. And yet, somehow there are things in it that are good, too. That’s something I don’t think I’ll ever not find fascinating—seeing the unexpected good in something largely bad.

That covers the stuff I finished, but what about the stuff I didn’t? There were plenty of shows less bad than Hand Shakers that aired this season. Some of them were—Miss Kobayashi’s Dragon Maid, Kemono Friends, BanG Dream!, and Idol Jihen.

I got the farthest into Idol Jihen, which I watched 5 episodes of. It wasn’t a terrible show, as it sometimes indulged in some delightfully wacky contortions of its ridiculous premise, but generally speaking it was a boring waste of time in between the bigger moments. It didn’t help that the characters had no personality or charm (at least part of that due to the horrid character designs). Draggle’s right—watch AKB0048 instead.

Miss Kobayashi’s Dragon Maid is a substantially better show that Idol Jihen, yet I watched less of it. That’s probably not Dragon Maid‘s fault. I liked the three episodes of it that I watched. It’s cute, with KyoAni’s typical fixation of small gestures and warm character interactions, and has some standout things going for it—like Kanna, its (somewhat inferior) rendition of Non Non Biyori‘s Renge. But just being nice wasn’t enough to motivate me to really catch up with it, so it just benignly slid off my watching schedule. 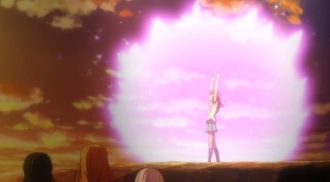 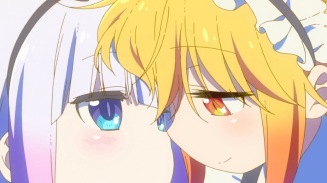 Kemono Friends was somewhat the same, although I will say that I enjoyed watching people talk about Kemono Friends more than I liked watching them talk about Dragon Maid—and possibly more than I liked watching the show itself. I did three episodes of Kemono Friends for a Crunchyroll article I wrote on it myself, but there were a number of other great pieces (Kastel’s, Froggy’s, Bobduh’s) that came out about Kemono Friends. I can’t remember the last time so many different writers all were all hooked on writing about the same show in this way. If meme shows are what it takes to attract a bunch of critics all at once, I guess more meme shows is what we need.

Demi-chan wa Kataritai lost me after three episodes, too, but for worse reasons that the prior two. After a lovely first episode, it started to go more and more for romance and creepy stuff between the high school girls and the teacher, and I really just wasn’t in the mood to navigate that in a show I’d hoped would be more pleasant and less blatantly sexual than Urara-chan, which I never even picked up for that reason.

Oh, yeah, I watched one episode of BanG Dream! and while I found it somewhat quirky, that wasn’t enough to get me back. I also opted not to watch the (obvious AOTS) sequel of Shouwa Genroku Rakugo Shinju on a week-by-week basis, meaning that someday in the future I’ll have the glorious chance to marathon it all at once and bawl my eyes out.

And that pretty much sums up my Winter 2017 anime experience! What did you guys watch and enjoy this past season? Feel free to tell me what I missed out on in the comments (although I can’t promise I’ll pick up anything other than Rakugo in the future).

31 thoughts on “Thoughts on the Winter 2017 Anime Season”