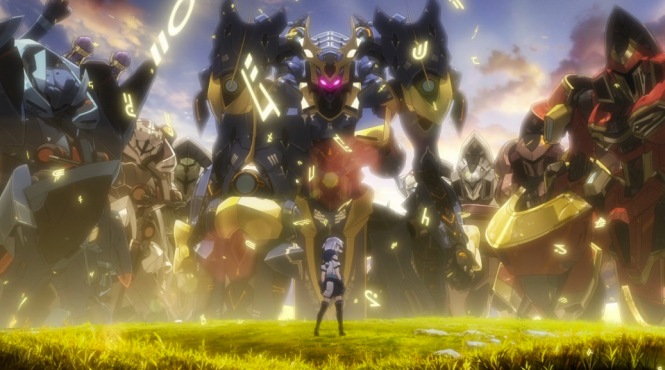 I’ve been enjoying Knight’s & Magic a lot this season. As someone who really only got into mecha fairly recently, something about the wide-eyed glee of the show’s protagonist, Ernesti, at being in a world of magic and robots really resonates with me. That enthusiasm? I get it! That’s where I’m at. But over the past few weeks, I’ve also had the opportunity to talk with a couple of good friends about the show, its nature as a wish fulfillment, self-insert fantasy, and some of the less charming elements that arise from that. While I may personally self insert as the characters who want to hug cute moeboys, these conversations have been a good opportunity to step back from my affections for the show and think more critically about it.

The source of some of the criticisms that have been leveled at Knight’s & Magic has primarily been its nature as an isekai and wish-fulfillment story. Throw a male character into another world where he gets the chance to be cool and awesome? Not an unfamiliar set-up in anime as of late, and certainly not one that some people have become tried of seeing. At this point, the isekai genre basically serves as its own notice for wish fulfillment stories. And although isekai certainly doesn’t have a monopoly here, these kinds of shows almost inherently lend themselves to wish fulfillment (something Frog-kun has dug into in his post on the Japanese response to the genre).

With that in mind, it’s understandable that Knight’s & Magic should find itself subject to critique by virtue of its use of the familiar movements of the genres in which it resides. Wish-fulfillment anime haven’t exactly made a good name for themselves, as shows like Sword Art Online and The Irregular at Magic High School (Mahouka) have become immensely popular because of their ability to butter up the viewer by fawning over their self-insert protagonists (often to the detriment of their moral quality). Meanwhile, on the isekai side of things, titles like No Game No Life, GATE, Konosuba, and Re:Zero have enjoyed a more complex fan response (although I certainly have my thoughts on the relative quality of each of them).

But this post is about Knight’s & Magic, which I think has, at least relative to the overall market, shown itself to be a far less troubling and thematically ugly production than many of its wish-fulfillment story compatriots. It’s not perfect by any means, but there are distinct elements within it that I think lend themselves to a kind of wish fulfillment that can be enjoyed without the moral compunction that accompanies similar shows. Specifically, where Knight’s & Magic differs and, I think, proves itself better than its peers, is in how transparently it communicates its nature as wish fulfillment and in how it uses some of its unique elements to undermine some of the typical tropes of its genre.

Of course, I suppose one might argue that the first kind of transparency is just as real as the second. After all, if the audience knows an anime is going to allow them to self-insert for the purposes of wish-fulfillment because it’s been marketed that way, isn’t that the same thing? I don’t really think so. You might know No Game No Life is a designed to be wish fulfillment for a certain kind of purpose, but that’s not the same as the show itself knowing and acting like the thing it is. The salient point here is that a lot of these shows only pay lip service to the fact that they are wish fulfillment – which is, in my opinion, a rather insidious thing. 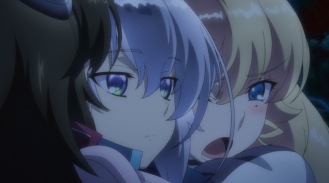 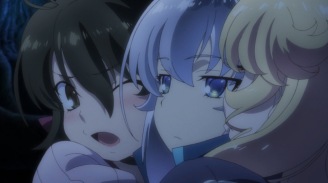 With shows like Mahouka or Sword Art Online, even though you know they’re wish fulfillment and they don’t really make any effort to hide that fact in their marketing or whatever, they often don’t treat themselves that way. Instead, a key component in the execution of fulfilling wishes is the pretense that wish fulfillment isn’t actually what’s happening. To use Mahouka as an example (and because I have a great deal for distaste for the show and it gives me pleasure to make it my whipping boy), the dead self-seriousness with which it presents itself belies the fundamental fantasy that underwrites it. Mahouka, even if it knows it’s wish fulfillment, pretends it is not.

Why is that bad? Because a wish fulfillment story that presents itself not as wish fulfillment absolves the audience of the need to self-reflect while watching it. It activates the self-insert mechanism without bothering to keep on the limiters of reality. I suppose, thinking about it one way, that’s not inherently a bad thing. After all, one of the great joys of fiction is the ability to be absorbed completely into another world. However, when that world is designed to construct a delusion of validation around you, it risks blurring the lines between fantasy and reality when the inevitable return to the latter occurs.

When the dissolution of those boundaries is coupled with ugly ideologies, gross attitudes towards women, and other sorts of nasty thematic underpinnings, it ends up reinforcing those ideas within the viewer’s worldview. That, to me, is an unambiguously bad thing. To use Mahouka as an example again, the message it communicates that “you’re awesome, and it’s actually society and others who are crappy because they aren’t capable of assessing your skills and you deserve to be lauded and constantly have beautiful women throwing themselves at you” is a pretty crappy one. The fact that it doesn’t even have the decency to recognize this itself (not that it would be that much better if it did), but instead treats this message as serious and legitimate… that’s bad.

But Knight’s & Magic doesn’t have these problems. It is a wish fulfillment story, yes, but it is also joyfully, cheerfully, and earnestly so. Down to the voice of the narrator grandly explaining Ernesti’s heroic deeds, the show is constantly reminding the audience of the artifice of it all. It is completely honest about what it is – and in a wish fulfillment story, that transparency is invaluable because it serves as a natural (and, in this specific case I would argue, rather gentle) buffer between the fantasy of fiction and the truth of reality. The ultra-quick pacing, the eager silliness of events, the heavy cliche, and the very genuine excitement of Ernesti himself all serve as constant reminders that the show knows exactly what it is and treats itself as such. 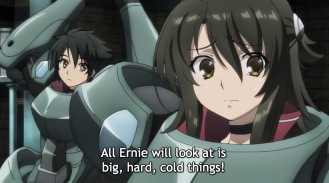 The ideology that Knight’s & Magic proclaims isn’t anything so self-insert affirming as “you are special, but unrecognized because society is unfair” or “the only reason you don’t shine is because you haven’t been given the chance” or even just “hey, all girls secretly are in love with you.” As Peter Fobian puts it, the fantasy of the show is one “where an enthusiastic character is given the opportunity to live out their passion.” The message in Knight’s & Magic is a simple one: Hey, you know what would be a lot of fun? If you were a super genius in a magical land with big robots?

And, you know what? It’s right. That would be fun! It’s the same sort of appeal that theorizing with friends about wild scenarios go, the “What if…? Okay, but what if…!?” thing we’ve all done. The world of Knight’s & Magic is a sandbox, and it makes sure you know that. As I see it, that’s an invitation to join in the fun, and since the show has largely steered away from having that fun come at the expense of others, playing along comes easy.

That’s not to say Knight’s & Magic is perfect. There are still elements mixed in with it that aren’t “fun” to me. I don’t like Helvi’s unnecessarily revealing clothing when the other (male) knights of her same rank get to wear actual uniforms. I was really uncomfortable with the way Ernesti seemed to justify taking Dietrich’s Silhouette Knight on the basis of Dietrich being a coward when he was clearly doing the best he could in an impossible situation. Playing around is all well and good, but things that treat other character badly cease to be fun.

And, alongside this, I can understand complaints about how the playground nature of the story glosses over human casualties to mack on its robots or how Ernesti’s combination of cuteness, cleverness, and purity of motivation earning him instant adoration from everyone trivializes the importance of hard work and forming genuine connections with others. One of the defining characteristics of wish fulfillment fantasies is often the erasure of nuance for the sake of making the self-insert feel good. And this oversimplification can mean the message communicated by a show turns rather sinister by ignoring important things.

But, again, this is where I feel Knight’s & Magic‘s transparency is a boon to it. Unlike Mahouka, which ignores nuance for the sake of pushing its message forward, or No Game No Life, in which a great deal of the “fun” is just really mean-spirited, Knight’s & Magic is a out for a harmless lark without pretense. And because of the innocence of its intentions, I find it difficult to fault the show for not being a serious examination of serious issues. It’s not trying to be a treatise on human relationships, so in some ways it feels unfair to criticize it for not being something it’s not trying to be.

To return to the show’s strengths, though, the final ingredient that makes this whole wish fulfillment thing go down well in Knight’s & Magic is the way it avoids glorifying Ernie as some kind of übermensch. Things like Ernie’s cuteness and the genuine nature of his relationships with other characters run counter to the way self-insert fantasies typically portray their protagonists as Awesome and Deserving Of Serious Respect. To use an example I’m particularly fond of, Ernie’s unwilling reception of Addy’s repeated hugs uses his appearance and reaction to make him the butt of a joke, (something Mahouka would never have done with Tatsuya, by the way). Likewise, goofy situations like in episode 3 where Ernie calls his desire to build a Silhouette Knight, a deadly serious matter for the world he’s in, a “hobby” in front of the king, make light of his one-track mind. 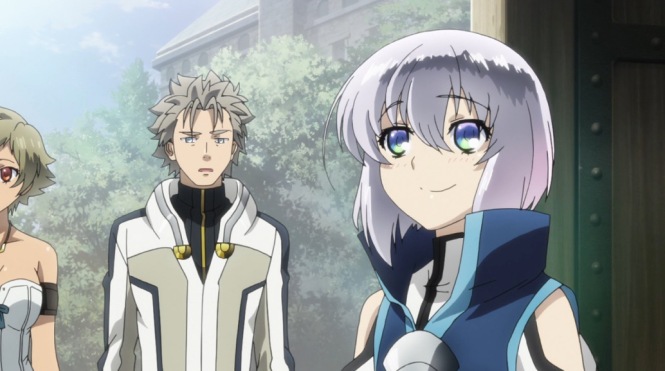 Although the overall narrative bends towards Ernie’s will, these kinds of moments go a long way towards not only towards making him less of an all-powerful figure for the audience to imagine themselves as, but also towards humanizing him. Ernie’s passion, eagerness, and authentic love for robots, whether or not they’re shared by the audience, paint a very specific and human portrait of a character. Sure, it’s touched up and made adorable with white hair that covers his eyes and hilariously effective within this world, but it’s also hard not to love this earnest caricature of someone who loves something the way Ernie loves robots.

In short, the only business Knight’s & Magic is concerned with is that of granting your wish to have fun, live in a bright, celebratory world, and to make and ride giant robots. And that, in my opinion, is a wish well worth fulfilling.