On the radiance of a certain anime. 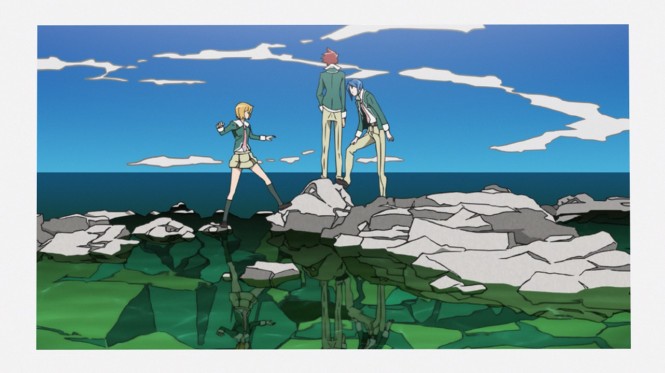 At the end of Star Driver‘s premiere, the first closing theme, 9nine’s “CROSS OVER,” begins to play over the final moments of the episode. Takuto and Wako rest together in a giant stone hand, looking at each other. It’s the start of a crush. Wako’s stomach growls. The two teens laugh. Following on the heels of the show’s first mecha battle—lavishly animated by the perennially entertaining Yutaka Nakamura, infused with just enough feathery effect animation during the magical girl henshin-inspired stock footage, and fueled by glorious “Dazzling the Stage,” it’s a surprising moment in how it pivots from the grandeur of a giant robot underneath a rainbow sky into a much quieter, more intimate moment.

The ending sequence that follows, which serves as the show’s ending through episode 13, is magical. Fresh, warm, and (again) intimate, it serves as a model of characterization through peripheral storytelling. The sequence’s depictions of Takuto, Sugata, and Wako’s mundane after-school adventures simultaneously endear the audience to the characters and establish the closeness of their relationship—all without needing to take extra screentime during the episode proper. The repetition of this for episode after episode only serves to enhance the effect. It’s Wako’s can of soda, the summer rain, falling into the water together…


“CROSS OVER” and the accompanying visuals are more than this, though. They are also—in tandem with the first opening—a very, very powerful statement of Star Driver‘s visual, sonic, and atmospheric aesthetic priorities. Star Driver is a well-told and well-written narrative, but it is also absurdly consistent in its aesthetic storytelling. Together, in written scene construction and visual direction and musical accompaniment, director Takuya Igarashi and scriptwriter Yoji Enokido have created a masterpiece evocation of the “summer of youth.” And while the show’s first OP and ED are, by nature, concentrated doses of this aesthetic, what is most impressive—and immersive—about Star Driver is the way it succeeds at maintaining this aesthetic code even in the midst of the world-ending adult machinations and mecha duels of its plot.

Forgive me if I’m a bit starry-eyed about this, but I was amazed. After all, this is a hope I’ve had for many anime in the past—that they would live up to the aesthetics of their opening and ending themes. Few, if any, have done it—but Star Driver does, and does so consistently throughout the entire series. I’m still agog, weeks later. It is one thing for a minute-and-a-half music video give the viewer the feeling of having been drenched in the lush tones of a passionate, gentle, and melancholic youth. It is another entirely for a 25-episode television anime to do the same alongside all of its other responsibilities. And to be clear, it’s not that Star Driver is so unique in its ability to maintain a consistent atmosphere, but that the actual show so perfectly resembles the sparkling aesthetics of its opening and ending sequences.

Obviously, the question is: How does Star Driver accomplish this? 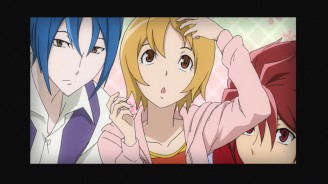 An accidentally rhetorical question, since I’ve already given my answer: through scene construction, through visual direction, and through a gorgeous and well-used soundtrack.

The first of these—scene construction—is the most difficult to explain of the three. It would probably be easier to talk about how the setting of Star Driver, a closed system on a semi-tropical island in a perpetual summer, is a perfect choice. But I find it more interesting to consider how the way Enokido and Igarashi craft the episodes outside of the ritualized episodic beats (the shift into Zero Time, the ensuing duel, the aftermath). Consider, for example, all the times we’re shown scenes of Takuto, Sugata, and Wako eating together at Sugata’s place, or of Takuto and Sugata in the bath together with Wako talking to them from outside, or the encounters between Head and Sugata at sunset. The fireworks party. Going to karaoke. Walking on the beach under a star-studded sky. Meeting in the cafe, again and again. Eating in the school cafeteria. Or just hanging out around town after school.

There’s a recognizable coherency to all of these scenes, to the way they all fit together to illustrate the character’s lives through the tropes of a carefree high school life. They are typical high school things, shot through with that anxious sort of energy that possess the summers where you’re free, mostly, but not entirely. I have fond memories of meeting up with high school friends to play soccer at parks during the summer, and then going to get ice cream afterwards. The kind of feeling that you could stay out all day and into the night, with nothing you have to do. The repetitive, but comfortable feeling of doing the same things with the same people over and over again. Star Driver uses the common, mundane scenes of that kind of life. They form the foundation of the aesthetic.

Igarashi’s visual direction in Star Driver, then, builds off of this base—or, rather, works in conjunction with it. While I could write an essay just on how much I’ve come to like the way Igarashi’s style impacts the shows he directs (even when he only does the storyboards for a few episodes), the biggest thing that strikes me about Star Driver‘s visual personality is its use of color. Starting (but certainly not ending) with the primary colors of the main trio’s hair, Star Driver‘s color palette is delightfully bold.

Some of this is connected directly to the scene construction. Sunsets abound, and thus we get beautiful oranges (accompanied by dramatic lighting). A plethora of nighttime scenes on a tropical island mean we get the gorgeous deep blues of night, complimented by the sparkling stars. Shots during the day are often composed to highlight the rich colors in the sky and the plant life of the island. And this is to say nothing of the even more absurdly colored worlds of Zero Time, which are like the colors of the regular world in overdrive. The visual aesthetics of Zero Time sell the pattern. If Zero Time is then dramatized, metaphorized climax of the regular world’s story, then it ought to be the most visually charged as well.

Which is merely to say that the richness of the world’s color serves Star Driver‘s core aesthetic: A summer of youth, in which everything in life—love, sadness, tragedy, triumph—is vibrant, colorful, and alive. 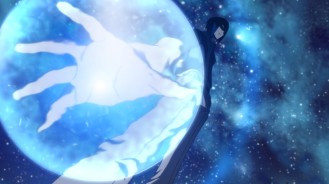 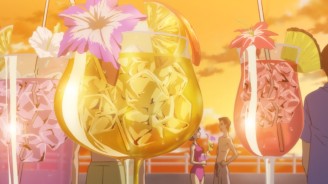 So we come to the music, the thing that ties it all together. Star Driver‘s soundtrack is a fantastic, wondrously symphonic piece of work, a collection which grasps the sparkling essence of wonder, the comfortable rhythms of just hanging out, the grandiose explosions of mecha duels, and even the comedically theatrical mood of Kiraboshi. I’m no music critic, but even I can tell when a soundtrack is perfectly matched to a show—and the keyword is “richness.” The layers of instruments and even the sweeping scope of the overall sound all return to the same aesthetic the scenes and visuals offer.

Even as Star Driver‘s soundtrack ranges from acoustic guitars to organ solos to full-blown symphonies to dense echoing vibraphones (probably vibraphones), it maintains that core. Through sad scenes and happy scenes, dramatic scenes and mundane scenes, this remains true. No matter the variation, that same sort central feeling remains—that, even if a true “summer of youth” doesn’t always sound exactly the same, there is a lushness that ought to be there, a brightness. It’s intangible, almost impossible to explain properly. But it’s there.

I did say this was all “among other things,” right? How about our oft-maligned writer-director duo actually pulling a genuinely coherently thematic statement out of the show’s mess of character arcs, individual thematic threads, and randomly excellent throwaway life lessons? How about the sheer force of quantity of stunning animation, episode after episode? How about the the unbelievably charismatic cast—villains and heroes alike? The amazing emotional gravity of the love triangle between Takuto, Wako, and Sugata? The clever way layers to characters are slowly revealed, one by one, beneath their surface-level archetype?

All these qualities, and more, could be counted among Star Driver‘s merits. Certainly, these things were key to the enjoyment I had watched the show—and the enduring love for it I suspect I will continue to have. But, in the end, it is the way the aesthetics of Star Driver so perfectly evoke the summer of youth its first OP and ED imply that I have the most love for. To watch Star Driver is to be immersed, not just in the story, but in the feeling of its characters’ world. It is a fleeting experience that passes away after 25 episodes. But somewhere in there is a certain kind of light, a certain kind of passionate joy.

8 thoughts on “Among Other Things, Star Driver is a Triumph of Aesthetics”