We are now rounding the bend on the Spring 2013 season of anime and I still am watching 12 shows. So, to help you figure out which shows you should go marathon and catch up on, I present the Spring 2013 Anime Midseason Report. You can find my current watchlist here.

This post isn’t meant to be a ranking system for the season’s anime (that will come later), only a report on what’s been living up to expectations and what’s falling short. So, in no particular order…

The writing in the show is wonderfully strong and has a natural Japanese feel to it that gives a very nice sense of culture. That trait is an extremely important one, as staying true to the Japanese lifestyle, language and approach is what makes this show so unique. Despite the more serious turn lately, the anime has not lost an ounce of its charm from the beginning of the show. Rather, the introduction of new characters has deepened the experience and adds layers to the wonderful complexity of the main characters. The Eccentric Family also holds the viewers’ trust faithfully, gently following up on its promise to unravel the web we’ve been shown. It is an exceptional bit of storytelling and well worth your time. 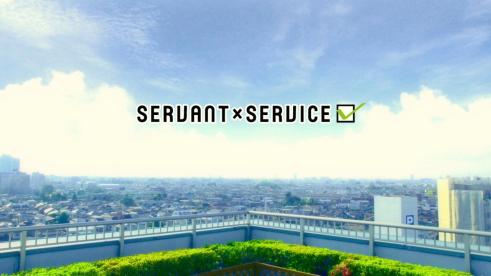 Still funny, although it has taken a turn out into relationship land, away from workplace humor. That being said, the narrative is plenty entertaining & has actually shown some moments of real emotion. The OP song is certainly one of the best of the season and overall Servant x Service is a really enjoyable addition to a Thursday afternoon. Small warning for some innuendo type humor, but other than that, I’d recommend it to anyone looking for a light-hearted show with good laughs.

Keima’s still at it and, albeit a couple episodes in the middle, TWGOK has maintained an admirable amount of dramatic tension and a sense of urgency throughout the entire season. Far better than the first two seasons in terms of emotion, the third season has also continued to develop Keima. Despite the rather odd premise, there is a strange, lovable charm about this show that effectively causes you to invest in every single romantic relationship. Strong recommendation for anyone who like romantic comedy.

After the first three episodes, I was really hyped up about this show, but since then Sunday Without God has failed to reach the heights it achieved in the third episode. We are now about to enter the fourth arc in the season, and the show is suffering without (not God) but a cogent plot line. The animation is still stellar, but the lack of character development in Ai, coupled with the jerky feeling between arcs is really bogging the show down. My recommendation is the watch the first three episodes and then leave the rest alone. The first three episodes stand completely on their own, and you won’t find anything better later on in the show. 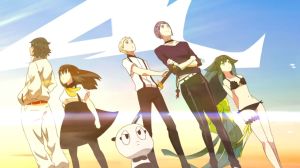 Definitely the dark horse of this season, Gatchaman Crowds has evolved from its first episodes into an intelligent, subtle and engaging story. Lead by the optimistic Hajime, the show continues to deconstruct superhero team archetypes and is working impressively well. At this point in the season, Gatchaman Crowds still hasn’t tipped its full hand of cards, but is slowly turning over card after card to reveal its message. It may not be for everyone, but I still highly recommend it.

Although it has triumphed over the danger of being a typical moe show, C3 is running about par for the course right now. It’s really not anything more than an entertaining show. The plot has become much more interesting, granted, but there are a number of other shows that are clocking in with better results. Only watch it if you really like cute girls running around with Airsoft guns.

Huge expectations coming from the author of Fullmetal Alchemist? Consider them met. Silver Spoon has been nothing short of impressive. Enjoyable no matter what sort of episode it uses, Hachiken’s adventures at an agricultural high school continue to showcase Hiromu Arakawa’s top notch writing skills. There are no let downs in this show, and it gives a very true-to-life look at the realities of farming. Watch it, and you’ll probably love it.

A late pick-up when I was bored on a Sunday, the swimming female-fanservice anime Free! is a little more than just really good looking shirtless guys, but not by that much. It’s really just a beautifully animated show with a bit of mystery plot, as well as the competition of swimming. Most of the characters fall into pretty standard roles, and at some points it takes itself way too seriously. Pretty apathetic either way as far as recommendations for Free!, so the right course of action seems to be a maybe.

Another late pick-up, Kiniro Mosaic is a funny moe blob anime about two high school girls from England going to school in Japan with three other high school girls. I added this show after seeing a bunch of funny pictures, and mostly the show is just good for laughs and absurdly cute character designs. Cute is really the only word to describe this show, so my recommendation is basically, “Why not? Give it a shot!”

This sums up Kiniro Mosaic quite well.

Episode 21 was the strongest episode in the show since Episode 1, but Attack on Titan is struggling with characterization problems that weren’t evident after 6 or 8 episodes. Due to the intense nature of the plot, character development has mostly been put on the back burner and it is hurting the show a bit. Other than that, Attack on Titan is doing what it has been doing since the beginning: being really high quality and intense to watch. Watch it, beware of violence and blood.

The Sisters arc is over and now we are into anime-only material, the Silent Party arc. The Sisters Arc of Railgun S was the definite highlight of the entire season thus far. The new material has been of a mild-mannered sort of quality, nothing much to hate and nothing much to absolutely love. But, as always, Railgun S is generally inoffensive, high production quality, enjoyable and fun-to-watch stuff and I still am counting it as the best of the season.

A late entry, RWBY is an anime-inspired series from RoosterTeeth, the studio which produces Red vs. Blue. With episode ranging from about 5 minutes to 7 minutes, it’s tough to say anything really good or bad about RWBY. The action is good and the animation is interesting. However, the short episode length is a major buzzkill each and every week. Really, the only reason to watch this is if you are interested to see what is essentially an American’s take on anime.