Hello, hello, I’m back again with another cheery anime review, the oddball middle school comedy Love Lab. Allow me to sum it up in a picture:

And that’s the crazy, clean fun that represents Love Lab. See see where it ended up in my rankings, click here. Love Lab gets a 7/10 from me, missing out on a higher rating because it is fairly shallow (although not in a bad way). However, the comedy is excellent and the themes are wholesome, ensuring that Love Lab deserves to be in the company of big hitters like Attack on Titan.

What’s a love lab? Romantic experiments performed by the five members of the Fuji Girl’s Middle School Council, designed to simulate situation in which a girl could woo a boy. Lead by the Student Council President Maki and guided by the “love sniper” Riko, the Student Council practices dropping handkerchiefs, waving their hair in the wind and answering the tough questions of young love, such as “Do boys like tan girls?”

A stellar comedy that mixes in slapstick, situational and random forms, Love Lab is a feel good anime from start to finish. Very few of the jokes are dudes, and excepting one rather dry “short story” episode, the episodes are generally very strong both individually and together. There are about 4 arcs within the show, but they are well connected and keep Love Lab from suffering from a Sunday Without God-like jerky feeling.

Appropriately for anime sporting an ensemble cast, the characters are what make Love Lab more than a generic comedy. Although weakness, regrets, faults and thoughts are usually played for comedic effect, Love Lab acknowledges the bumps that can occur in friendship, resulting in a surprisingly emotional and effective penultimate scene in episode 13. 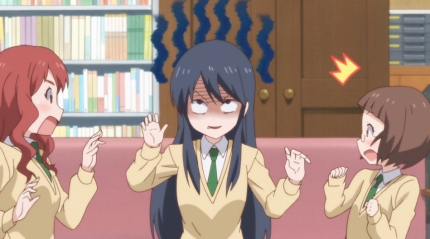 Rather like another anime I reveiwed a while ago, Love Lab does a good job of avoiding cliché, and uses its archetypes in new ways or parodies them. For example, our token tomboy, Riko, is a bit of tsundere and acts tough, but displays a wonderful range of emotion through the course of the series. She also is just as desperate for love as the effervescent Maki, breaking the “not interested in boys” mold so often given to the tomboy.

Riko is also a rare case of a straight man who (unlike Mahiro from Nyarko-San or Natsuki from Chronicles of the Going Home Club) is neither grating nor disruptive in her comebacks and her poking at the fourth wall. Love Lab rarely, if ever, comes across as self aware. It’s the kind of accessible, quality, broad-appealing anime that the industry needs to pull in new fans.

While not a must-watch, Love Lab is a hilarious, clean and fun-filled watch. Given the number of comedies that rely on sexual innuendos and uncomfortable jokes, Love Lab is refreshing character-based and situational humor. And it even has a feel good ending with a lesson about friendship.