NOTE: Having finished this review, I recognize that it is largely devoid of those prized reviewing things called “logic” and “good analysis.” I apologize. And yet, I think it might still be worth reading. It’s not really a review; it’s a response, because that’s all I can manage for this show and because maybe that’s what this show really needs.

I’m just going to start off here: this was the most difficult  piece I’ve written all season (although I haven’t yet seen Nagi no Asukara), and I apologize in advance (again) if this review is disjointed or just ends up making not a lick of sense. Golden Time hit me emotionally and connected at a very personal and visceral level, and yet, I see that there are inherent and obvious flaws in the show. At what point does a reviewer have to scrap their own feelings and aim to be objective? Is it even possible to be objectively review a show when there is so much emotion bound up in one’s impressions of said show?

Those are pretty difficult questions, but here is perhaps some sort of an answer. I have to, at some level, base this response off of my feelings about the show, because a review that ignores my own perceptions…well, firstly, isn’t a piece that I’m interested in writing and, secondly, wouldn’t be honest. So, as I go on with this response, I will be trying to stick to my core philosophy on reviewing shows: I’m looking for the good first, and then those things that hold the show back will be dealt with in turn. And with all that being said (probably poorly), my kneejerk rating for Golden Time is 8/10, and you can find it ranked on the Ongoing Rankings Page.

Of course, having said all that, I feel as if I have to start with Golden Time‘s flaws for the review to make any sense. To lead off the considerable list of problems, the pacing of the show in sections was terrible. The first four episodes were the biggest perpetrator here, with Banri’s confession to Koko at the end of the fourth episode shaking me up enough during my weekly watching that I put the show on hold to marathon after the final episode was released. The pacing problems continue all the way through episode 7, then right themselves until they pop up again later in the series.

Next up on the list of flaws is the use of Ghost Banri. From the start, I hated the implementation of Ghost Banri and tried to think of him as nothing more than a visual incarnation of Real Banri’s past, but

Ghost Banri was never really presented like that. Overall, it was an extremely clumsy device and was the source of a lot of rage from me towards the show early on. As the show progresses, Ghost Banri became less of a problem for me (Real Banri’s bad luck and the car accident were realistic enough on their own for me to dismiss the conceit that Ghost Banri was haunting his old body), but then Ghost Banri crops up again in the final episode in a baffling sequence. Overall, the show was much stronger when Ghost Banri wasn’t treated as a character, but left Real Banri to deal with the implications of his old memories returning.

Those two issues were specific enough and recurred frequently enough that I can write at length on them, but the show is littered with other problems. Wide swaths of the show make no sense, and while the amnesia element didn’t cause me too much grief during the watching of the show, looking back it seems quite contrived in places. But if I didn’t notice that during the actual watch of the show, I’m not going to really count that against Golden Time.

One fact about this show that I am pretty certain of is that it is far better when marathoned than when watched weekly. Because the flaws, as I’ve said, generally are unique to episodes and situations, it’s fairly easy in a marathon to simply breeze through the story and forget about the problems of the last episode. I definitely think there is something (not sure what) to be said about Yuyuko Takemiya’s writing that there were so many obvious flaws in the show, and yet it still managed to be emotional and compelling. How does a single show contain so many problems, yet still succeed in maintaining engagement and delivering a story with an emotional payoff like Golden Time does? It’s a mystery to me, it truly is.

So, where do I go from here? That was four paragraphs of flaws; and yet I still want to give this show an 8/10. It’s even more mystifying when I consider the fact that I have no earthly idea what message Golden Time was trying to send. There’s a sheer density to the events that occur, and to the themes that the events raise that Golden Time essentially became an overload of themes and moments that I valued. As far as a single message goes, at a point in the show, Golden Time seemed to me to be a ringing endorsement of the truth that love is a choice, not just a feeling. Banri, time and time again, verbally commits to Koko despite his conflicted feelings and backs up his words by staying with her. But everything seems to fall apart in episode 20 when Banri’s memories come back in at the disastrous Awa festival.

Somehow, none of this seems to be anybody’s fault, even though everyone is acting selfishly. It’s not Banri’s fault that his current identity is slowly being supplanted his memories of the past, and he’s certainly not to blame for his absolute terror of “dying,” as he accurately rightfully describes it, but that doesn’t change the fact that he lies to Koko and hides things from her. It’s not Koko’s fault that Banri lies to her, and I struggle whether or not to blame her for breaking up with Banri, but it doesn’t change the fact that she chose to protect herself first in a moment when Banri needed her. And it’s not really Linda’s fault that Banri had his accident, and her resistance to telling the truth about the past is, at heart, intended for Banri’s own good, but she also can’t totally keep herself detached from Banri.

The pain that underlines this show is so painfully evident at times, and the dramatic tension is layered so thickly in places that its impossible to see through the morass to the ending. I never really thought the ending would be anything but Koko x Banri, and I think that is the way it should have been, but was this really the right path to take to the destination?

And that’s the question, I suppose: does the fact that ending was right excuse the means Golden Time took to get there? The conclusion it seems I’ve reached is: yes.

Here, perhaps, is my final reasoning for why I wanted to give Golden Time the high ranking of an 8/10. It is populated by characters who are hurt, injured, extremely flawed, incomplete, selfish, foolish, unkind at times, unlikable at others, weak, broken, mean and human. Love is not logical; the way humans act when they are in pain isn’t logical; the disasters that befall us and the pains we experience aren’t logical. Life is a huge, unqualified mess. It can be awful, terrible, and all sorts of other nasty things. But Golden Time pushes through all of that and gives the audience Koko and Banri walking hand in hand at the end of it all. 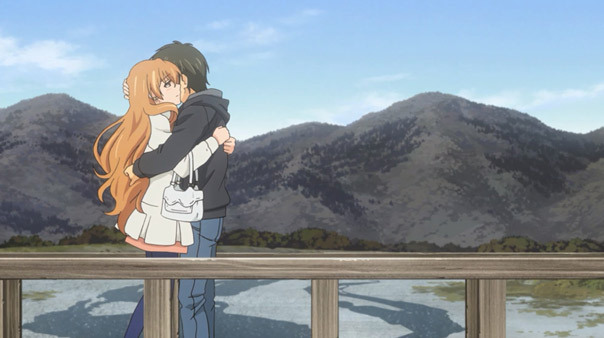 It’s Linda yelling for Banri to run to Koko, even though she still loves him. It’s Banri looking into the mirror and deciding that, no matter what his memories may do, he can still make his own decisions. It’s Banri remembering Koko on the bridge and Koko accepting him, even though she very well knows he could forget her in the next moment.

It is all of that, and all of the mess of the show, and there’s still a happy ending. That must be the answer. It has to be, for me. Maybe it’s not an answer for anyone else, but I’m out of other options for myself. Even if Golden Time was a disaster of show, it’s a happy ending. And maybe that’s just what you need at the end of this disaster we call life, something hopeful that proclaims, “Something good can come out of something awful.”

Golden Time is a show worth watching. It may or may not be a bad show and I may even consider it a disaster, but I’m convinced that somehow there is some form of inherent value in watching everything unfold in this story about hugely flawed human beings that redeems everything that works to drag the show down. It’s not an easy watch. It may not even be fun. But, for whatever inexplicable reason, I think it’s important.