Sometimes it’s really easy to point to a specific part of a show and say, “This is where it went wrong.” Sometimes, a show is just bad from top to bottom, making it even easier to categorize a show’s flaws. Mekaku City Actors [SHAFT, 2014], appropriately for the studio from whence it hails, is not such an easy case to deal with. Straight up confusing at times, genuinely emotional at others, and just plain weird frequently, it feels like a classic case of misused potential. Even after twelve episodes of generally feeling ambivalent about the show as a whole, I still think Mekaku City Actors was trying desperately to tell an important story, and to be different enough that people would listen. Good intentions aren’t always enough, but for what Mekaku City Actors tried to be and for what it was, I’m giving the show a 6/10 (Ranking).

On the surface, Mekaku City Actors does seem to be a Monogatari-wannabe. Complete with Shinbo-like, but not quite as excellent, direction and headtilts, Mekaku exhibits nearly all of the what are now trademark SHAFT quirks with much less intentionality and much less finesse than in Monogatari. But if you try to compare a show to something better than it, you’ll end up disappointed every time.

Now, I could talk about the many failings of Mekaku City Actors on its own terms (and believe me, there are plenty). But I think, ultimately, it’s a lot more interesting to ponder the potential of this show, what it could have been like, what kind of story it was trying to tell and how, at the bottom of it all, it’s a heartfelt (and believe me, there’s a lot of heart hiding here) story about family and friends, loving the people around you, and wanting to be with them.

SPOILER: In the final episode of the anime, it’s revealed that the entire world has been constructed and rewound again and again by Marry, simply because she wanted to spend time with her friends. Echoing both her mother’s and her grandmother’s wishes, Marry is the third generation of women who have been separated from those they loved. But Marry has the power to change all that. It’s not a

particularly stunning or effective revelation, as it comes out with very little logical foreshadowing. But it is important thematically—time travel’s been used before in Mekaku City Actors for the sake of staying with a loved one.

In episode 4, we see Hibiya struggle against fate trying to separate him from the girl on whom he has a crush, Hiyori, as he rewinds time over and over trying to save her from horrible deaths. While the episode apparently was just a one-off that had no relevance to the rest of the story, it again highlighted the theme of wanting to stay close to a loved one. And then there’s Ayano, who wants to stay with her siblings forever. And her father, who is dealing with the death of his wife. And Ene, who has lost her body and the boy she loved. And Kano, who bears the burden of knowledge alone for the sake of his adopted siblings and friends. Everyone is struggling with the same thing.

Between the monster’s family and Ayano’s family and the Kisaragi-Shintaro sibling combo (no broconning or sisconning—thank you!), Mekaku City Actors tackles the idea of family love both from the angle of blood relatives and those who you choose to be your family. I particularly liked this dual focus, as I sometimes feel like blood relations are trampled on in modern society for the sake of “your family being who you want them to be.” This isn’t to say that I dislike the idea of choosing your own family—I think it’s an important idea for many people—but I just like that Mekaku City Actors used both kinds, for each is equally valid. The show certainly affirms the value of each and even, I think, takes steps to demonstrate the compatibility of the two. After all, why does Marry value her friends so much? Because they help to fill the void of the blood family she lost.

Family isn’t defined by blood and it isn’t defined by who you choose, either. It’s defined as the people who accept you for who you are. For a group of freak high schoolers with supernatural powers, disembodied existences and magical snakes inside them, being with others allowed them to be accepted for all their strangeness.

So, at this point in the review, it may be heard from the rafters, “But iblessall, it sounds like you really actually like this show! Why only the 6/10?” Well, it’s because all those themes that I just talked about, those concepts and ideas that I value? They’re terribly obscured by the convoluted nature of the narrative. Important details are left out or glossed over. Unimportant things are stressed for far too long. The heartfelt love for family that I felt was gently pulsing through by the end of the show was buried under the dispassionate tone of the first half of the show. Mekaku City Actors is a poorly executed show, despite the warmth of the themes within it. It’s a shame, but being able to see the potential so strongly at least keeps me from feeling like the experience was devoid of value. I’ve personally been inspired in my own writing by Mekaku City Actors, because I want to take the ideas that I saw go unarticulated and underutilized and let the world in on them. Sometimes, you just can’t say what you really want to say. For Mekaku City Actors, a show that came from a series of Vocaloid songs, maybe this just wasn’t the right medium for the message. That’s okay. A bad idea presented well may be more powerful than a good idea presented poorly, but that doesn’t invalidate the good idea. 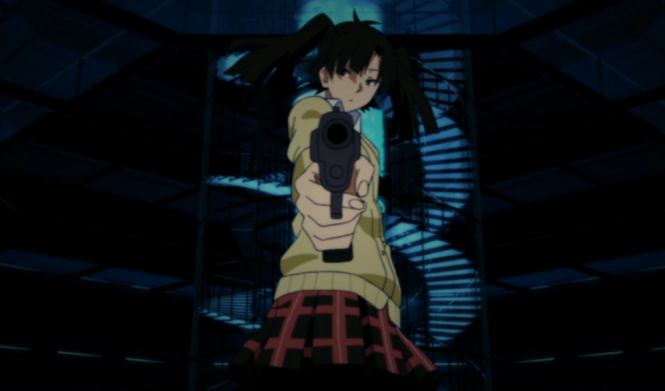 From an entertainment perspective, I can’t recommend Mekaku City Actors. Despite the affection I have for the underlying messages, they are just that: underlying. The show can be terribly dull at times, and I just don’t think the experience as a whole is valuable enough to merit the time required. But if you do want to watch it anyways…