Well, I’m in the midst of finals week (although I guess I really only have one left, so…), but I’m getting my anime watched. And, after that, it’s graduation—my blogging status immediately post-graduation is up in the air right now, but that’ll be another post entirely. As for this week, I made a little tribute to why I really do love this season a whole bunch. That particular element might not be reflected in the blurbs below, but remember that it’s true!

Punchline, Episode 4: Man, it’s rare that a show like Punchline pulls itself out of its worst instincts and actually dives into being something truly worth watching, but that’s really what happened with this episode. I will continue to maintain that the first three episodes weren’t particularly good, but I can forgive that when you give me awful, well-done scenes like the ugly post-pond fight scene in Mikatan’s bedroom with the four girls systematically attacking each others’ biggest weaknesses. Throw in all the intrigue from the Qmay terrorist plot, the excellent video game-feel of Yuta’s quest to possess Rabura’s body, and general entertainment value, minus (mostly) the panty shots and the stupid pregnancy/sex jokes and you have an episode that kept me engaged from start to finish—a first for this show. The ED sequence/song are still the best thing about Punchline, but the gap closed considerably with this episode. I’m actually excited to see the next episode now, another thing the show hasn’t managed to make me feel before.

Danmachi, Episode 5: I think the best way to describe this episode is that it was another Danmachi episode of Danmachi characters doing Danmachi things. In others, I really liked it! Bell and Hestia’s disaster of a date was exactly the sort of hilarious romp I expect from their interactions, while still doing a lot to show strength the way we perceive their relationship. They’re both huge dorks pretty much constantly, alternating which one of them is more competent as the specific situation demands. Bell’s enthusiastic venture into the dungeon to test out his magic—”Firebolto! Firebolto! Firebolto!”—was yet another display of how much of a child he really is and lead into yet another instance of him being the one rescued by a girl, rather than the other way around. The mounting drama around Lilly’s character is working okay in the abstract, but this is the second time Danmachi has written in adventurer guys who are utter slimeballs as the villains and they just aren’t that compelling. Fortunately, the way Lilly reacts to them keeps the story grounded, but yeah, it seems antagonist writing (predictably) is another weakness.

Yamada-kun, Episode 4: This adaptation really is something to be admired simply on the merits of how skillfully the manga is being turned into a really decent anime. No, it’s not surprising at all that it is this good—after all, it’s being handled by Michiko Yokote (Shirobako)—but, then again, it is kind of surprising that something that honestly should be a wreck, isn’t. As for the anime itself, there’s some nice attention to detail happening in places and overall the beats of the story are well-placed and the relationship between Yamada and Shiraishi is going very, very well. My memory of the manga is kind of fading into the haze of “this was the point where I started reading very, very quickly,” so I’m not remembering all the plot events—a nice personal event that’s basically erased all feelings that the anime is being rushed. Overall, this is a hugely pleasant experience for me and I’m massively grateful that the manga I enjoy has turned out to be as much, if not more, engaging as an anime. Also, thank you for the ponytails~ 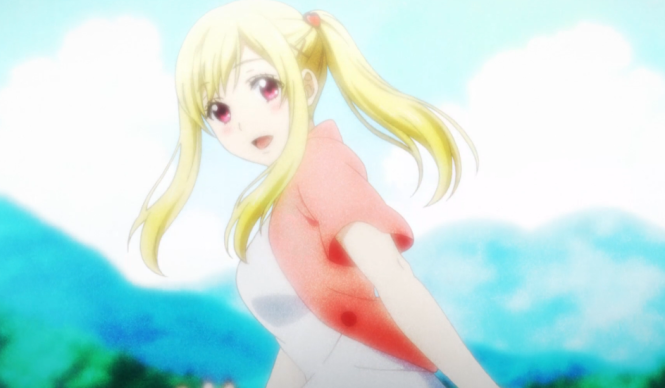 Show by Rock!, Episode 5: So, Grateful King is also played by Tarou, which means Strawberry Heart is like…his familiar or something? In any case, I really liked how Cyan’s mission to save the world is basically framed as directly opposed to her personal wish (being in a band) this episode. We already know how much it means to her to be a part of Plasmagica, so the tension between the “save the world and return home” desire and the “be in a band” desire that’s she’s fulfilling in MIDI City is really compelling and kind of sad. And then to layer on what we saw of Retoree last week, it amplifies the emotional effectiveness of that final scene because now “save the world” is compromising her relationships with others and affecting their dreams. I’m not really expecting Show by Rock! to take aim at the whole “world hero” trope, but it’s dancing along that line right now, which is kind of neat. Did I mention last week that this is one of my favorite OSTs of the season? I think I did, but I’m too lazy to check and it’s still true anyways.

The Disappearance of Nagato Yuki-chan, Episode 5: Well, that wasn’t a particularly graceful conclusion to this drama (and I loathe that somehow Nagato running away got framed as “I was just being polite” when everything else about the situation was screaming “She’s really upset!”), but there were some nice parts to this episode even so—most of them between Haruhi and Asukara, or between Haruhi and Nagato. Oh, so like…all the scenes with Haruhi in them, basically. Haruhi’s big problem right now is basically that she’s walking the line between full committing one way or another on Kyon—does she like him and will she pursue him or will she step out of the way as a courtesy to Nagato? Because she won’t make a definitive decision (after all, there’s risk in either decision), she’s causing problems for Nagato, even if it isn’t entirely her fault. As long as Yuki-chan stays away from the dumb romcom tropes like the interrupted confession and boob fall that marred the end of the episode, it still has enough substance to be interesting and good going forward. 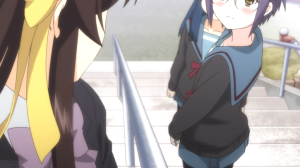 Sound! Euphonium, Episode 5: At this point, I’m actually kind of thankful I’m not doing weekly write-ups of Euphonium because episodes like that would be such gigantic efforts to write-up I think I’d be burned out in a week doing both Eupho and BBB. But this episode—this episode—was just filled with show stopping moments. Like this. Or this. Or this. And I literally mean show-stopping, as in, “I need to pause this episode right now and try to come to terms with what I just watched because wow.” As an entire effort, this episode was easily the best Euphonium has had yet and wielded KyoAni’s stunning ability to great unfathomably beautiful visuals with what I can only describe as dangerous mastery. As for the content itself, there were some really stellar moments (like Kumiko realizing that she has achieved her fresh start), but there still was a bit more dead time (read: boob jokes, bleh) than I wanted. But weighed against everything else Eupho did this week? I’m more than happy to just forget it. 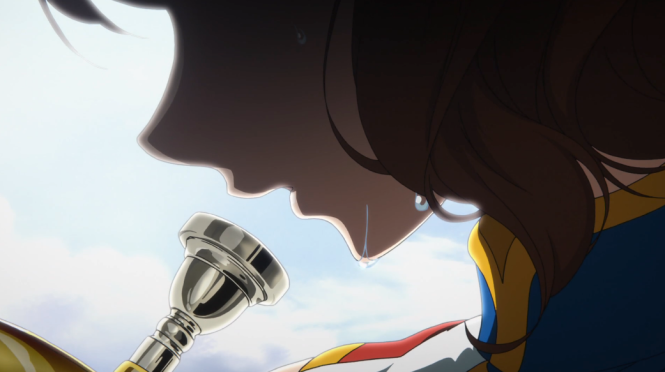 Blood Blockade Battlefront, Episode 4 & 5: Goal is to get both of these posts done during the week, since graduation is on Saturday and who knows how long it’ll be before I can blog again after that. Short version: still my favorite show of the season and episode 5 was my favorite episode since 2. No other show is more fun for me to watch!

Nisekoi:, Episode 4: Ugh Raku went full Kamijo Touma this week. Gross. Yes, it was nice to see Chitoge sort things out with her mother, but having Raku solve the problem by just shouting at everyone and Chitoge dissolving into a solving moeblob wasn’t really the way I wanted to see it happen. I’m not saying Chitoge has to be perfect and “feisty” constantly for me to like her, but the whole “Mama!” yelling bit put her far too close to infantilization for me to be comfortable with. If she had just been crying out “Okaasan,” even, I would’ve like it better.

Hello!! Kiniro Mosaic, Episode 5: A tamer episode, in terms of the comedy, although I did get a few great laughs out of Karen’s picture-taking. But then again, Karen’s almost invariably the highlight of any top-notch Kinmoza episode, isn’t she? Also, nihilist moegirls.