Let it be known that asking me questions of ask.fm is like is a sneaky way to get me thinking about topics you’d like me to cover in a blog post…this was originally an ask.fm answer, then grew too large for the ask.fm and so became a tumblr post, then kept growing and became more of a philosophical manifesto/personal story than I had originally intended, and thus here we are. To begin, I know I’m treading on sensitive ground here and so, of course, I’d love to hear feedback in the comments. [1] For me, this is very much still a topic I’m learning about and pondering through. But here’s where I am right now.

But let’s start with the question that kicked this whole train of thought in my head (a train that, frankly, hasn’t been given much room to run lately): “Which anime works would you consider feminist?”

Earlier in the day, I had the pleasure of reading Guy’s ask.fm answer to the same question, which I’ve linked here because it’s good and you should read it, but I didn’t want to just link to someone else’s thoughts and call that my answer, no matter how well-stated I thought those thoughts were. Plus, Guy’s answer is pretty postmodern in its questioning of the definition of feminism and the (what I felt were) implications of intersectionality—which isn’t to say that it’s a useless answer, only that was really good a serving as a starting point for my own thought processes.

Anyways, in thinking about how I wanted to answer the questions, something became clear: The criteria for “feminist media” are about as clear as mud to me, so I thought that rather than trying to assign the label of “feminist anime” to anything, I’d rather just talk about a handful of shows that treat their female characters in a way that I really like. So, here they are: 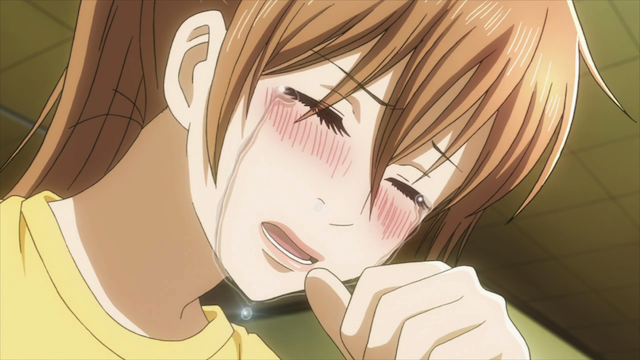 By this point, I’m sure my bias is being heard loud and clear, enough so that you can take a look at the list of stuff I’ve watched and guess at other shows that fall into this typing. If you ask me, the best thing we can have in media is more, more, more female characters who are just people, without a big discussion on their genders, gender roles, and so on. Now, this may seem counterintuitive—after all, don’t we need people to challenge their sexist assumptions? Yes, but the more I think on my own experiences and what I’ve heard from others, I’m become increasingly convinced of the importance personal narratives in driving change in the hearts of people.

Let me tell you a quick personal story, a story I’ve actually been wanting to tell for a long time, but just haven’t found the right moment for until now: as you all well know, I love the Monogatari series and, while she’s not my favorite character (Hanekawa unseated Senjougahara eventually), I’ve come to really love Kanbaru. Who is a lesbin, as per the famous gif. But the premise here, the most important parts of those last two sentence are “I love Monogatari” and “I love Kanbaru.” And I love Kanbaru for being a person with weaknesses, for being a person who falls in love, makes a terrible choice, gets depressed, deals with a ghost on her own. Of course, it’s impossible to divorce Kanbaru from the fact that she’s a lesbian, but although religiously and culturally I was (and still am) feeling out my ideas about homosexuality, what I did know was that this was a character I loved and a character I loved all of, including her sexuality.

In short, no debate, no conversation, and no other piece of media has done as much to open up my heart to being willing to try and understand homosexuality than the Monogatari series.

And that’s a big freaking deal, you know? I would never have got there without Monogatari and the reason I was able to get there was because although Kanbaru was a lesbian, she was always a person first—and you don’t fall in love with people for their sexual orientation, but for their personhood. For me, the way Isin and Shinbo depicted a lesbian girl as just another human being allowed me to access her humanity first and everything else about her second. It was, as I’ve taken to calling such portrayals, a “normalized portrayal,” where a person is depicted as a person first and only. There are no conversations in Monogatari about society, culture, and lesbians. There’s just Kanbaru and her faults and her strengths and her humanity. In other words, Monogatari prioritized Kanbaru’s personal narrative above all else—functionally, because that’s just the kind of story it is, but the effects of that decision were profound for me.

And so it goes with those other shows I’ve listed, in some form or another. The most convincing things about Utena‘s campaign against oppressive patriarchal norms isn’t the heady supertextual arguments about gender and identity…it’s Utena herself. Her story. Likewise with Rose of Versailles and Oscar. And so, when I arrive at shows like Soul Eater, Chihayafuru, and Yozakura Quartet [2], I’m being sold a personal narrative without the distraction or overt ideological challenge of “feminism in my anime.” And I buy that stuff like crazy. I buy it without even thinking about it, because it’s presented as normal.

It seems entirely natural that Maka should be the protagonist of Soul Eater and that Hime should be the mayor in Yozakura Quartet because their respective shows don’t fuss about it or call attention to it. That’s just how things are in their worlds and their stories. No one’s out writing feminist analyses of Soul Eater and YZQ (okay, there are a few piece on feminism and Soul Eater, but they’re not very good) because they don’t call for them. They just drop persons who happen to be female into their stories and run with it like it’s supposed to be like that. As it should be!

If you like the metaphor, these are the Trojan Horses of good media stories about women. By handling the stories of their female protagonists with dignity without calling attention to them, they’re supremely able to draw in audiences by both the charm of their well-treated protagonists and their other strengths (for example, Soul Eater‘s fantastic visual aesthetic or Chihayafuru‘s relationship drama). That’s not to say that grand ideological pieces like Utena or Versailles aren’t needed—they are. But my personal preference will always lie with the method of using the personal narrative of a single character to appeal to my own humanity. While it’s easy to brush aside an abstract ideological concept, the connection between human beings is far more difficult to reject. And, before you know it, you’ve fallen in love with a character or, better yet, a real live person who challenges you by their identity as “human.”

[1] Addendum to the Post: As I said in the introduction, I know this is a touchy subject. Please, talk to me in the comments about this! This idea of the power of the “personal narrative” isn’t just an abstract, academic one—it’s something that has and continues to impact my life. I want to hear your stories as they relate to this piece; give me a chance to understand.

[2] Incidentally, Hime’s pretty cool in the 2008 version of YZQ, which I actually thought was pretty decent.

[3] Site News Note: Sorry, I’m not off of hiatus yet. I still lack any sort of furniture so my back is killing me after typing all of this. I’m hoping to grab a bunch of furniture over the weekend; once I have a bed and desk, I should be good to go again.