Appropriately, considering the subject matter, this episode of Hyouka felt incomplete, filled with half-truths, or…as if we didn’t have all of the clues…which makes it both difficult and easy to talk about.

On one hand, Hyouka‘s almost always been pretty self-contained in terms of individual episodes—each one has a specific, direct visual purpose to it that informs the subtler elements of the surface level plot and conversations. However, this episode was all about ambiguity, being unclear, and generally being a tough puzzle to crack. I think you’d have to be pretty sharp–sharper than Oreki, even— to really pick up on everything that’s going on here, because whatever it is, it’s certainly more than just “help us figure out what the intended ending to our movie is.” There’s (first and foremost) the question of Irisu, then the question of the scriptwriter, the question of the Classics Club’s involvement, and the question of what all of this means to Hyouka as a whole.

And, as I said, this episode basically seems designed to frustrate any attempts to answer even a single one of those questions. Where Hyouka‘s been nothing if not intentional and clear in its visual direction to this point, this episode was basically the opposite in the extreme. I have some theories that the obviously animation-heavy demands of the homemade movie (who woulda think animating a bad movie would actually demand more animation than animating a very good show?) may have somewhat impacted the rest of the show’s ability to be a vibrant visually as normal, but looking to external causes in this case isn’t very helpful in trying to work out what’s going on. 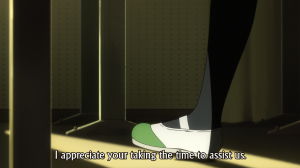 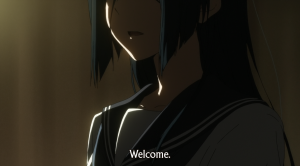 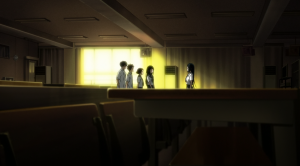 And I guess it all kind of starts and ends with Irisu (who I presume—upon rewatch—is the main typist in the episode’s opening sequence of text and instant messaging). In case it isn’t immediately apparent from the four screenshots above, her main visual theme is light and shadow, together. After seeing only her(?) fingers in the pre-OP scene [1], her initial entrance is almost framed as that of a villain—her face shrouded in shadow until the last moment, when she emerges into the light to greet the classics club. And this young woman of questionable intentions perpetuates this suspicious first impression by the way she dodges Oreki’s questions and generally acts mysterious prior to showing the Classics Club members Class 2-F’s film[2].

And then, excluding some amusing interactions within the Classics Club and funny depictions of the way each of them engages with the movie (Chitanda, engrossed; Mayaka, just watching; Satoshi, taking notes; Oreki, booooored), the movie passes without general incident. I suppose I should note that I don’t really care who the culprit of the movie’s crime is, nor have I spent even a lick of time thinking about who it might be. As I’ve said, I think that’s mere window dressing for a larger mystery playing out behind the scenes. And, somehow, the Classics Club is now involved in that dance.

I took time to note that the movie passes without incident for a reason—because, during that time, the Classics Club is isolated from Irisu. As soon as she returns, the real wheels of whatever this story is begin to turn again. Throughout the ensuing conversation, Irisu stands with her back to the project screen, struck at an angle by the light coming through the window—which, as you can see above, casts her shadow back onto the projector (the place where the movie was once playing). I suppose I could read this as Irisu’s unstated mystery as overriding the importance of superficial mystery of the film, but—truly—the cinematography and lighting are so ambiguous in their meaning throughout this scene that I struggle to make state that interpretation with any confidence whatsoever.

The only real conclusion that can be drawn here is that there is far more to Irisu than she (or the show) are letting on right now. Director Yasuhiro Takemoto’s cinematic style (one that’s been present since the first episode) is one of seemingly obsessive interest in capturing the show’s conversations from a variety of angles, and the way the shots are sequenced—with changing angles, distances, and composition—makes the scene nearly impregnable. What does it mean when we get a long shot of Irisu, surrounded by light in the mostly dark room (#2 below)? And what does it mean when we cut from that to a close up where the mise-en-scene is simply her face and her shadow on the wall behind her (#3)? And what does it mean when we get what’s perhaps the most arresting single shot of the entire episode—a sudden high-angle shot where the division between light and dark evenly bisects the frame (#6)? And, in some cases, the differences between individual shots are so small (#4 and #5) that it makes you wonder if it means anything at all…

With all this going on, I suppose the most interesting thing is that Oreki seems to be entirely oblivious to it. All he sees is an inconvenience. Something annoying he’s going to have to take care of. He’s suspicious, sure, but only as far as it means he might have to work (and even then, he’s easily taken in by Irisu’s passing reference to efficiency). Heck, Satoshi basically lays out that they’re probably being used by Irisu in the episode’s penultimate conversation, but Oreki doesn’t seem to care in the least. Is it arrogance? Perhaps, considering all the talk about geniuses at the beginning of the episode. I got a lot of false humility from Oreki this episode, as he tries to wave off Satoshi’s near-compliment with claims of being normal (even though we know he conceives of himself as being different). So maybe Oreki can’t even imagine that there might be someone out there smarter than him, someone able to manipulate the camera almost at will, who could be pushing him without him even knowing it.

What I do know for certain, though, is that Irisu is some kind of weird foil/parallel to Oreki. She’s commanding and assertive in a way he’ll never be, but according to Satoshi she’s also good at working other people for her own purposes. Maybe Irisu is driven by the same sort of desire to avoid work and responsibility that Oreki is, but as the daughter of a hospital administrator it could be that delegating that work and responsibility to others is her way of “conserving energy.” I’m looking forward to seeing how this all plays out. You’re going to have to step out into the heat, Oreki, whether you like it or not… [1] I just want to note how hilariously obvious it is when Chitanda begins the type: pink, excited, and always correcting herself.

[2] I have no further comments to add regarding the quality of the film beyond what Mayaka offered. Props to Kyoto Animation for being so committed to the craft of good filmmaking that they’re able to make a genuinely bad film.