In which the Classics Club enters classroom 2-F as detectives, intending to solve the crime and identify the killer. Instead, they find themselves trapped in their own locked room—and still, the motive and the motion of the crime remain hidden from our view, obstructed by those loud, those selfish, those conniving, and those just trying to do their best. Can the Classics Club solve a locked room case whilst being trapped within one themselves? 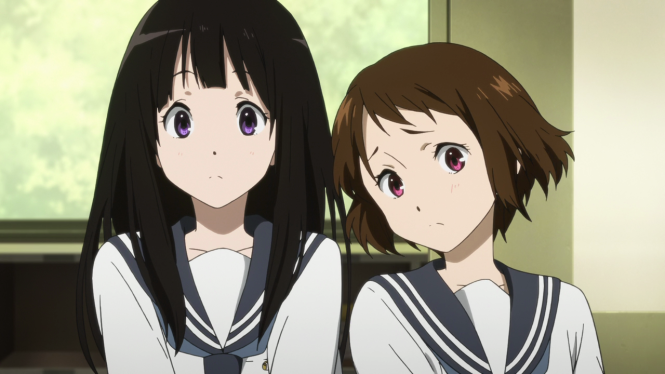 As I mentioned last week, I’m far less interested in what the answer to the proposed riddle of the film mystery is than I am in the reasons why the Classics Club has been asked to play this game. I think there were a few clues dropped in this episode, but I’m not expecting Hyouka to come entirely clean until the true end of this arc. Of course, from one point of view, the mystery that I see isn’t even a mystery at all—all of Oreki’s question regarding the situation were met last week by Irisu’s calm and disarming answers, so for the Classics Club the only mystery is the one directly in front of them. And I think it would be likewise easy to agree with them, if the events and cinematography of this episode didn’t so obviously point to the contrary. Then again, perhaps it’s not so obvious. It’s a mystery, after all.

As far as I’m concerned, this episode was all about framing the Classics Club as trapped inside their own locked room mystery. The opening shots of the episode, as with most episodes of Hyouka so far, introduce use quickly to the mise-en-scene of the location. But unlike most other episodes of Hyouka, the Classics Club spends the entirety of this episode pinned to a single location—indeed, almost entirely to the same positions (their chairs) within that location (the room). But the episode begins with a shot of the classroom door, before proceeding through three quick shots of some of the items in the room. 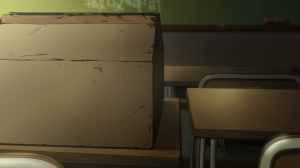 All this could be merely incidentally, just a casual setting of the stage—but I think that’s assigning far too much frivolousness to a show that continues to be meticulous as Hongou about its choices. Rather, these four shots seem to invoke the setting of the locked room in the mystery, defined primarily by a door and crowded with a number of seemingly trivial, but potentially important items.

But this is all really just the warm up for the tell-all shot, the one that comes immediately for the episode’s OP song break:

From cutting off Chitanda, Oreki, and Satoshi’s upper bodies to using a sharp diagonal line through the middle of the shot to using only the doorway to allow us to see through to shooting the shot from outside the doorway and from behind the characters—and (as a result of all this) assigned what’s probably an entire third (or even closer to half) of the frame to the hallway floor—everything about this shot screams “trapped.” Our heroic Classics Club members have stepped through the door willingly, but they will not be allowed to depart until they have “solved” the mystery before them [1]. Of course, they aren’t quite able to do it, but perhaps that’s because the killing blow has already been struck?

I know I’m leaning into the “locked room” metaphor quite heavily at this point—after all, they aren’t literally in a locked room—but, as I’ve said, the mystery here is more than just, “What was intended to happen in Hongou’s script?”

If you’ve gone down a read footnote one, you’ll see that I’ve worked myself into yet another mystery genre metaphor—that of the interrogation. Looking only at the Classics Club, yes, this seems very much like a locked room problem, but the members of the film production staff who come into to speak with them, despite being outnumbered, seem to treat their time here more as investigators than as witnesses. In terms of events, Oreki is called out not once, not twice, but three times (one for every member of 2-F). Although the attitudes and contexts through which they do this vary, the focus definitively shifts to Oreki at least once in each of these conversations, even though Mayaka seems to have been appointed the de facto leader of the Classics Club’s questioning.

The other notable factor is the presence of each 2-F member’s respective brand of aggressiveness. Nakajou’s fixates on Oreki early because of Oreki’s probing questions, but his aggressiveness really comes out when I realizes that the idea of “summer grass” will validate his theory. It’s a powerful moment. Suddenly, the lighting of the entire scene changes from one of relative balance to intense contrasts between light and shadow (recalling the visual dynamic Irisu brought to the previous episode) and each character is isolated in a single shot. 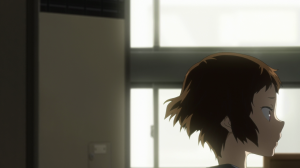 In case you hadn’t guessed it by this point, the Classics Club really isn’t here to actually solve the mystery of the film. They’re being pushed around at the whim 2-F members, each of whom seems to be pushing their own specific agenda. So, the question is why?

My theory: the movie’s actually been finished, but the class has had a disagreement over what to title the film.

Alternately, the film’s neither been finished nor titled, and the class has disagreed over how to complete it due to conflicting opinions about what’s most important. In either case, it’s notable that all three of the interviewees brought up the subject of the film’s title while talking about their theories. Whatever the state of the movie, it’s clearly untitled at this point—and the Classics Club, in some way, is being manipulated to help settle that point. The presence of Irisu’s light-shadow motif further hammers this point home for me, and the Classics Club has been thrown so out of orbit by all the pressures that the tipsy Chitanda serves as a kind of metaphor for the way the situation’s spiraled out of their control…as a couple of the final shots in the classroom didn’t communicate exactly that [2]:

In the first shot, the use of the fisheye lens effect distorts the dimensions of the frame, achieving a weird effect that effectively communicates the trio’s confusion over Sawakiguchi’s assertion that the answer to the locked room problem doesn’t really matter. And, in the second, the high, canted angle and reprisal of Irisu’s light-shadow motif (combined with the trio’s body language) exudes a sense of defeat and exhaustion. The Classics Club has been put through the ringer entirely [3]—and, for Oreki, the challenge isn’t even over yet, with tea and Irisu on the horizon.

Good luck, Classics Club. Although I think you’ve basically been had at this point… [1] Note how the members of class 2-F enter and exit the room at will—coming in without regard for the Classic Club’s interim discussions and leaving whenever they’ve said all they want to. And the soft-spoken Eba serves as a warden of sorts, allowing her members in for the interrogation.