I do apologize for my inconsistent responses to comments over the last week or so—I’m in the middle of a fairly serious job application process, so that’s consuming a lot of the time and mental energy I’d otherwise be directing at blogging. Don’t worry, I haven’t lost my job or anything! I’m just pursuing a great opportunity. I’ll keep you guys updated as things happen. Onwards to the week!

Noragami Aragoto, Episode 4: Why turn up the heart 5 degrees when you could turn it up 75? Hello, yes, this is Noragami Aragoto and that’s exactly what we did this week. It’s kind of unfortunate that the anime-original arc in Norgami‘s first season made use of the “kidnapping Hiyori” bit, as it’s hampering this season’s ability to really make that particular plot element hum. But you know what still works? Yato and Yukine wanting to get Hiyori back. And Kofuku turning her back on Bishamon for the sake of Yato. And pretty much everything about the way this episode was built—from visuals to storytelling structure. The real nature of Yato and Bishamon’s rivalry has been telegraphed for a while now, but none of those hints helped ease the weight of actually seeing Yato near Bishamon out of the house of despair she’d built for herself. Now, Bishamon’s back at it again, but this time I doubt Yato will be so inclined to help her. And all that’s without even touching the cliffhanger…no no no no no no…

K: Return of Kings, Episode 4: As far as episode of K go, this one was a real winner. K generally succeeds best when it’s wrapped up in its own crazy plotting, but this week’s episode was all about emotional resonance—and man, was it resonant. The genuine affection I feel for most of the characters in this show has kind of crept up on me, but I’ve been sort of aware of that for a while now. Despite that, Shiro and Neko and Kuroh’s reunion on the bridge was one of the most affecting moments of the season for me, a scene beautiful in a way only a scene fueled by wonderfully articulated character relationships can. There was a simplicity to Neko’s overbearing joyfulness and Kuroh’s stubborn refusal to be emotional and Shiro’s obvious pleasure at seeing both of them that just made the whole scene click. I don’t know exactly when this trio became such a powerhouse of goodness, but it’s here in force now and I couldn’t be happier.

Concrete Revolutio, Episode 4: I swear, this show continues to improve in ways I never expected and I am so. darn. happy. Becoming disillusioned with the world isn’t exactly a pet theme of mine or anything, but I do like watching characters with ideals, whether they’re living them out to the fullest or having theme challenged. As an idealistic person myself, I’ve seen both side of that coin—and Jiro, sadly, seems to be on the harder end of things. This boy wants badly to trust in the things he thinks he knows, to believe in the goodness of people and the simplicity of the world…and it just won’t let him. As much as he struggles, the tragedy of being who he is and living in the world he’s in is, as I see it, inevitable. Yet he continues to struggle, whether out of stubbornness or out of ignorance. And I can’t help love that, and love the way the people around him do their best to be there with him. That’s Emi and that’s Kikko and that’s even the rest of the Superhuman Bureau. I look forward to seeing how this tragedy plays out, and what solace Concrete Revolutio has to offer.

Gundam Tekketsu, Episode 4: The most solid and consistent show of the season (in my opinion, Concrete Revolutio‘s highs have been far higher) so far—and what the heck, it’s the Mari Okada show! Tekketsu returned this week with an episode that felt even more Turn A to me than some of the prior ones have, returning to the land and to a grounded experience of the world away from political grandstanding and battles for survival. At least, it did so until Okada teased us with Cookie and Cracker’s close shave with the Gjallarhorn car and Mika losing his temper on Gaelio in an almost fatal fashion. The whole scene with the Gjallarhorn members was tense, anxious, and eerie in a way that seems to portend dire things in the future. Of course, the plot’s been pointing that way all along, but seeing the future conflicts spelled out in such a subtle fashion (at least as subtle as a scene where one character almost chokes another to death can be) was like seeing Okada stretch out and go, “You know what I’m going to do, but I’m not going to do it. Yet.”

Comet Lucifer, Episode 4: This week’s edition of Veggie Tales—excuse me, Comet Lucifer was…well, it was sure something. While no show seems to be able to compete with Comet Lucifer‘s general cuteness competency, it seems few shows are going to be able to keep up with how unexpectedly random it has become. I mean, sure, we’ve got our standard serious anime plot going on in the background—kidnapping cat lolis is rote—but we’ve also got dancing vegetables and rich boy robots that tote cows around with them and a rock snake mascot with a cute voice that unsuccessfully tries to babysit the aforementioned cat loli and a party and a typhoon and stories of an older man’s youthful love adventures…I mean…what is going on in this show? Somehow, miraculously, Comet Lucifer seems to have absolutely no idea what kind of show it wants to be—and that’s apparently just fine. It may not be what everyone wanted it to be, but I’m continuing to really enjoy it. 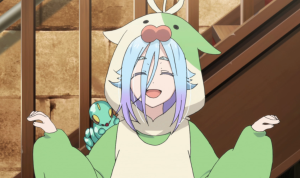 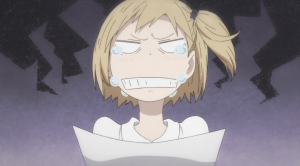 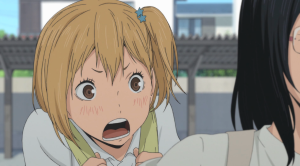