Noragami Aragoto, Episode 6: And thus, I presume, concludes the Bishamon Arc. As generally good as last week’s episode was, it (in my opinion) doesn’t really hold a candle to the excellence of this week’s episode. Now, while I’ll admit I haven’t really been much involved emotionally in Bishamon’s arc—as well-executed as this story has been, I think it’s almost entirely failed to make Bishamon sympathetic in the same way Yukine and Yato are—I was still struck by how fascinating it managed to make all of the character dynamics this week. The tension between gods and Regalias was touched on a bit in Yukine’s arc during the first season, but it’s really in Bishamon’s arc that this dynamic has been explored in full. “Gods can do no wrong,” Yato declares—the human conception of good and bad doesn’t apply to those beings who are above the human condition. I suppose this is the crux of Kugaha’s being cast out of heaven. He attempted to impose human values on the divine, and was inevitably punished for it. And not simply by death, but by a fate worse than death.

But Kugaha says he loved Bishamon more than anyone, and despite his actions I think he’s to be believed. But Kugaha loved—and how he came to this point, we may not ever know—not the person of Bishamon, but the concept of Bishamon. And it is here that his love differs from that of Kazama, who loves Bishamon as Veena, the person of a god. Man must negotiate his dealings with gods on his own, and it will never be easy. How can the human ever truly understand the divine? 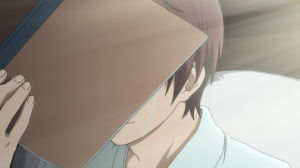 K: Return of Kings, Episode 6: It’s interesting that we’re approaching what will probably be a major climax in the show’s seventh episode, which also leads me to believe that the story from here on out is going to be fairly predictable. Nagare will defeat Anna, Munakata, and Shiro to take control of the Slates, and the remaining episodes will be spent working up to defeating him and—likely—destroying the Slates once and for all. Note, of course, that I don’t hold predictable storylines in the some sort of contempt that others do; the journey to the end here, especially considering the way K is always experimenting with different things. For example, this week we had the stunning long take at the beginning of Kuroh and Sukuna’s fight, a 20-second clip of wild camera gyrations and zooms—and imperfect final product, certainly, but a thrillingly ambitious attempt. As long as these moment continue to happen and the characters continue being their endearing selves, nothing’s going to stop me from watching this show.

Comet Lucifer, Episode 6: I sort of get the feeling I know this story, but Comet Lucifer remains an experience that feels constantly fresh for me. We’re halfway through the show at this point, but I get the sense that we’ve really just started. Whether or not you appreciate that, well… that probably depends on you! For my part, I enjoyed the heck out of kid Felia bopping around in the earlier episodes, but I’m also really enamored by the shift towards the more mature exploration of life that came this episode. The addition of the wedding party—and the subsequent explosions of emotion from Kaon—weren’t subtle in the way they changed the show’s focus from “look at the world!” to concerns of the heart (and, of course, Felia’s “what is love?” was even less so), but this feels like a natural progression. And the mecha battles continue to be some of the best fights of the season. Yeah, robots!

Gundam Tekketsu, Episode 6: Tekketsu rebounded this week, as Okada took the episode into the territory she does better than anything else: character work. For me, the highlight was seeing Mika, Atra, and Kudelia putter around the ship together—it’s kind of weird, but the three of them actually have a really easygoing dynamic when Atra’s insecurity about Kudelia isn’t getting played up. A lot of that, I think, comes out of the down-to-earth concerns Mika and Atra share, and Kudelia’s genuine desire to understand and reach out to them. This shows as she accompanies them with the lunch boxes—a great way to show that Mika’s interests, for all of his importance to Tekkadan, are truly in the mundane details of the group’s operations—and as she tries to help educate the boys. And then, then was more on Orga and Mika’s incredibly complex and dysfunctional relationship. Okada’s in her element with this stuff. I’m loving it. 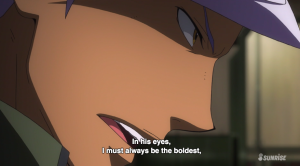 Concrete Revolution, Episode 6: An offbeat episode, but a good one. For me, this episode of Conrevo functioned mostly on mood and tone. We haven’t really looked away from Jiro’s story with any real intention since episode 2, and the choice to take this episode to an entirely new cast of characters—mostly detached from the work of the Superhuman Bureau—let the show take on a tone somewhat different than its prior tragic feel. Of course, the irony is that Conrevo continues to be a tragedy despite the focus on humor this week, but it was less of a personal tragedy and more a tragedy of society and situation and manipulation. “Don’t mess with the system, or the system will mess with you,” could very well be the true message of this episode in context, despite the fact that Don and his remaining two friends walk away from the chocolate factory on their own terms and without Jiro’s help. But they’ve made their own choice, and they decide to live with that. Was it worth it? I don’t think Conrevo is in the business of answering such questions.

Starmyu, Episode 6: So the boys have passed the first round, and Otori and Hiragi are brothers. Those are the big takeaways (other than Kana Asumi voicing one of Nayuki’s little sisters) this episode, but I think the implications here are much bigger than the simple facts of the matter would indicate. Unknowingly, Team Otori has been caught up in an ideological battle about the nature of performance and arc, enacted against other groups and against an imposing system of tradition. That’s a lot of big stuff, and yet we’re also grounded in the very endearing relationship of these boys and their immediate struggle to survive (and hopefully thrive!) as performers. And yet their caught in the paradox of having a benefactor who gave them a way into the system, and yet who also dwells outside of it. The time when Hoshitani and the other understand what’s really at stake—artistic freedom—is coming, but the question remains of whether or not Otori will be able to entirely pull them into his philosophy before then. If he can’t… will they abandon him for a more traditional route? (No, because then why have this story, but still…)

Miss Monochrome S3, Episode 6: Puns and more absurd humor and more improbable events. How is this show real. Who allowed this to happen. They must be both punished and rewarded.

Haikyuu!! S2, Episode 6: There we go. After some puttering around, Haikyuu!! finally got back on track this week doing what it does best—letting the Karasuno boys grow and push forward. I fully expect them to be a disjointed mess the next time they step on the court, but the steps towards cohesion are coming and they’re going to be amazing to watch happen. Oh, and Oikawa is my trash husbando and I won’t share.

Rakudai Kishi no Cavalry, Episode 6: Nothing new here: Stella x Ikki solo scenes are still an oasis amid a torrent of okay to bad other stuff, the imouto continues to be an instigator for a lot of the bad stuff, Alice x Ikki scenes continue to be actually pretty good. But, having come this far, I don’t really feel the need to go on—dropped, or at minimum put on hold.

One Punch Man, Episode 6: Action was weaker this week, but are we maybe moving towards a bigger story? I actually finished this episode hoping for more, which is a good change.