Yet another narrative adventure through my weekly watching schedule, courtesy of a revival of sorts in my drive to blog and write things. I do apologize for the lack of updates recently; I think I burned out more than I realized. But I’m feeling it again, so let’s go!

When I last left you all with the Winter 2016 Anime Party post, I was feeling pretty good about this season. Turns out, two weeks later (aside from despairing in the intervening week between episodes of Konosuba), this season is still really rocking. Anime Power Rankings (APR) even returned from near death with a post for the first two weeks of the season, and as I was filling out my ballot (a sublimely easy task), I realized what an utter blast I was having with this season. Now, I know I’ve been hyped about seasons early on in the past (I’m thinking of last season, in particular) and then cooled off by the end, but Winter 2016 absolutely seems like a season where this isn’t going to happen. To show you guys why, I’ll start off with my APR ballot to show you how I’m stacking up the season’s shows in comparison to each other.

Episodes have come and gone since I filled out this ballot, but my rankings here haven’t changed at all. I’m (admittedly) an episode behind on Rakugo Shinju, but that’s because you can’t rush a show like this. Watching an episode of Rakugo Shinju before I’m read feels like trying to drink a nice wine on an empty stomach—wasting something that ought to be enjoyed to the fullest. That being said, I may be acting a bit dumb, as Rakugo Shinjua also seems like the kind of show that you can watch an any mood and still get swept away by. I just wish it didn’t come out on Fridays, at the end of the work week… (check out my essay on Rakugo Shinju that I wrote for Crunchyroll!). 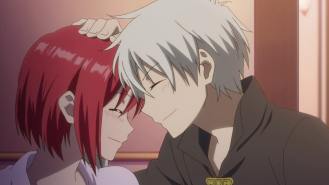 Meanwhile, I’m also an episode behind on Akagami no Shirayuki-hime S2, but I count that as a more forgivable offense since the reason for it was that I spent all of Monday writing my Aniwords post on ERASED. So, while I don’t know what happens in episode 3 yet, I can still marvel at the elegance and dignity that Masahiro Ando and Michiru Oshima’s joint efforts (along with all the BONES animation directors) continue lend to this beautiful show. Shirayuki-hime is a soft show, but it’s by no means a weightless show. Sequences like the four shots I’ve posted above wordlessly emphasize the trust and intimacy that’s grown between Zen and Shirayuki. The long shots cuddle them together in small spaces with the close-ups allow us to be privy to the true closeness of their love. I love, love, love it. And now, with the two of them facing the first legitimate challenge to their relationship (long-distance, how appropriate for us viewers in the modern era!), we may even get some drama out of this sweet little show. It can do no wrong.

On basically the other side of the spectrum of comfy watching lies Konosuba, which (as I’ve already mentioned) has been absolutely torturing me in the weeks between episodes. I love the heck out of this show, its derpy sense of humor, and the benevolence with which it bestows jokes that would otherwise seem downright mean. Aqua is a champ, and an inspiration to me (more on that in a later post, probably), Megumin is a hoot, Kazuma continues to be one of the better straight men I’ve seen in a comedy, and Darkness…well, we’ll find out today how good she really is. I’ve have some suspicions as to why Konosuba is working as well for me, but that’s another post (likely next week’s Aniwords) coming, and I don’t want to spoil it before I’ve done my research and planned it all out. 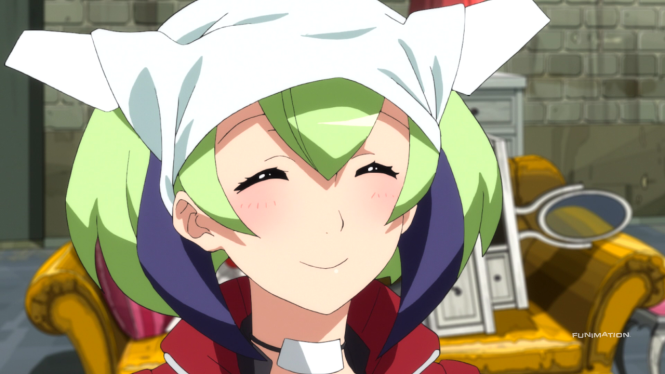 I spilled a bunch of digital ink yesterday on ERASED, so I don’t have a lot to say about it right now, but I do want to make sure I note how grateful I was for the ending of the episode at the “Christmas tree.” It was a genuinely peaceful, comforting, kind moment out of a show that’s been fairly brutal to watch, and I really appreciated everything about it and the respite and hope it offered. The foxes running in circles, the lights of the tree, Kayo’s quiet “baka…” It was lovely.

Another note on the relative strength of this season comes from the variety of stuff that’s turned out to be good. Rakugo Shinju is one thing and Shirayuki-hime has a bit of the same blood running through it, but ERASED and Konosuba are good in completely different ways. Likewise for Dimension W, which gave us a relaxed sort of episode this week that really humanized (ironically) Mira and gave the show some room to just breath and show that it has a (good!) sense of humor. Mira firmly laid down her claim for being one of the pillars of cute anime girls this season (Guppy from Phantom World and Yume from Grimgar are there as well), but also got a lot of nice characterization as a somewhat naive, definitely kind-hearted, and genuinely pleasant character. A lot of times, characters like Mira are just pure moe and get a free pass as “nice” just because of their looks, but moments like Mira talking Kyouma’s ear off in the car and her patient interactions with the kids really set her apart from this mold. Thank you, Shoutarou Suga, you write anime good.

Also, Dimension W got Stereo Dive Foundation to produce their best anisong since they did the ED for Beyond the Boundary, which I’m glad of.

You wouldn’t guess this about a show whose screencaps got me over a hundred retweets on Twitter, but I’m literally only watching Phantom World for Guppy at this point—and by literally, I mean I’m just skipping through the episodes to get all the good screencaps of her. I feel it’s important to my online brand to continue to champion Guppy, even if I don’t have the patience to deal with Phantom World itself directly.

Speaking of shows I’ve run out patience for (or, at least, shows I thought I was out of patience for), GATE surprised me this week by, uh, not doing anything at all with its story—and thus having its best episode of the new season. When GATE‘s trying to seriously engage with its overarching story, it really falls flat on its face, ranging from outright offensive to laughably dumb (as I’ve chronicled before). However, this episode was mostly fluff, and GATE was better for it. We got some Rory, we got some Tuka (who’s still just window dressing, sorry Tuka), and even got a little bit of Lelei. Better yet, by sending Itami out to fight a fire dragon with a posse of girls, we’re basically guaranteed that this will be the main focus of the upcoming episodes. No more bad politics, yay!

Grimgar‘s more or less continuing to be itself at this point; unlike Phantom World, it has more than a single redeeming feature to elevate it above its (admittedly infuriating) banalities, such as the whole post-peeping debacle. Yet, even that incident ended up having some more significant effects than expected (awkwardness in the party), so somehow Grimgar manages to stay a step ahead. With what looks like an upcoming death next, I’m interested to see if the show shifts in focus next week. Also, the marbles in the OP! I love them!

We’ll end with the Saturday Sequel Hour this week, with Durarara!! trending up and Haikyuu!! S2 continuing to be something of a disappointment. I talked to a lot of people this week about Haikyuu!! and what’s happened in this second season to make it feel so much less engaging than the first, and we’ve come up with a wide variety of answers: the music’s not being used as well, more frequent cutaways from the court to spectators, fewer conversations between the players themselves, and the momentum-killing length of the training arc from the first half of the show. Whatever it is (and it may be a cumulative effect), it’s kind of sad to see—please Oikawa, come back soon.

And as for Durarara!! its push upwards may be nothing more than a temporary thing, but a combination of surprisingly good storyboarding that actually conveying the emotional realities of the characters on screen without overstating things and a return of focus to Mikado and Anri (along with Kida, I think they’re still the most compelling part of this franchise), Durarara!! felt engaging and, more importantly, focused this week in a way it’s not been for a long time. I’ll drop some screencaps below, where you can see visually the difference between the ways Mikado and Izaya interact with the world, as well as a few shots that just look nice. These kinds of visual excellences are not something I’m used to seeing from Durarara!! and I hope they continue.

I’m not going to follow Bubuki Buranki weekly, but I may check in with it every once and while. It’s definitely a show better taken a few episodes as a time. 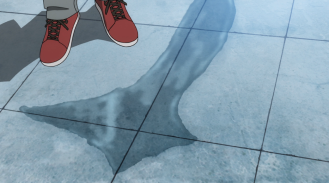