Whew, it’s been a while, huh? Apologies for the delay—weekend trip and video games have a bad habit of messing up my routines so thoroughly that I can’t get other things done even if I have the time.

Ah, where to start with this bounty of good anime that is the Winter 2016 season (and, looking ahead to Spring 2016, it seems this trend of goodness will continue in sync with the beauty of spring weather, which has finally arrived in the Midwest)? I suppose, to make sure I have to end on a high note eventually, we’ll cover the downers right at the beginning here.

Dimension W saw its departure from my weekly schedule this week, as being behind by two episodes and the general lack of presented reasons to care about anything finally outweighed my fondness for Mira on the “should I keep watching this” scale. The show’s collapse since episode 4 has easily placed it into the top spot of disappointing shows of the year for now, as I was genuinely excited for this project before the season started and even more so after the first three episodes. But, alas. I suppose there had to be at least one let-down in this otherwise wonderful season. I’ve also entirely given up keeping track of Phantom World—Guppy or no Guppy. That…actually might be old news, but I sort of forget when I actually chucked that one off the list.

There have been other shows with less-than-glamorous showing over the past two weeks, but I’m at least still continuing to keep those shows on my schedule for now. 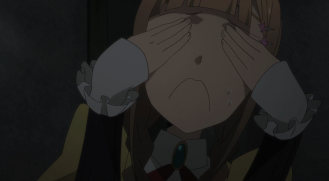 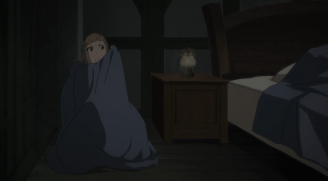 Pictured above: me, continuing to watch GATE.

I jest a little bit about GATE S2, but the fact is that this show continues to fascinate me by its holistic and entirely devoted commitment to its particular set of ideologies. A new high-point was the most recent episode’s introduction of a hilariously overdone skeevy journalist straw man that is just another piece of the show’s hyper-suspicious worldview, aggressive-defensive worldview. In fact, it was good enough that I feel like I’m finally at the point where I have enough ammunition (intentional word choice, that) to actually put together that post on GATE that I’ve been promising to write since the end of the first season. That’s more of a reflection of my own mental processes than those of the show, though, as the most recent episodes have wildly varied from so boring I skipped through the whole thing (episode 8) to mostly boring but also kind of fun (episode 9). Lelei is still the best, by the way.

Speaking of shows of varying quality, Durarara!! x2-3 continues to march towards a potentially compelling finale without giving any strong signals as to whether or not its actually going to cash in on all the build up its been doing for almost three full seasons now. In all honesty, my hopes aren’t super high, but with only a few weeks left I feel I might as well finish it out and appreciate whatever goodness I am able to eke out of the show. There are a ton of loose ends still flopping around that I feel aren’t likely to be resolved, but as long as we get a somewhat satisfying ending for Kida, Anri, and Mikado, I’ll be happy enough.

Another show with a lot of loose ends and not much time left is ERASED, which I’m no longer as down on as I once was—but I think it’s far to say that my emotional investment in the show, even in Kayo, has frayed quite a lot. It’s sad, really. Episode 8 should have been a genuine watershed episode and episode 9 should have been the warm conclusion, but I feel the show continues to trip over its own feet with stuff like Kayo’s grandmother showing up out of nowhere and the continued hints at the teacher being the murderer. I really don’t care at all who the killer is—I just want to see who Satoru is able to turn the tables on him, particularly now that the emotional core of the story (Kayo) is gone. ERASED certainly hasn’t lost its ability to be tense and thrilling, but no longer works on the emotional level it once did. But, I have some hope! I think Tomohiko Ito and crew can still make it a fun watch, and if they’re able to pull that off I’ll be plenty happy.

Of course, ERASED has a long way to go if it wants to catch up with the intensity of Haikyuu!!, which has turned on the afterburners the last two weeks with the Karasuno versus Seijoh game. I’ve made no secrets either here on the blog or on my Twitter that I think Tooru Oikawa is hot and a super fun personality, so getting to see him in glorious action has been awesome. And, more generally, the match itself has been as much a battle of personalities as it has been volleyball, which adds a layer of fun to the game that has been missing from battles past. I’d frankly be more than happy to watch this match stretch out through the end of the season, but I’m sure that’s not going to happen and I’m sure Seijoh isn’t going to beat Karasuno (sadly, since I’m genuinely rooting for Seijoh to win at this point). “Push it, push it, push it, push it, Tooruuuuuuuu!”

And with that, I’ll stop spinning my wheels and start talking about the shows that really matter most to me this season: Mahoutsukai Precure, Konosuba, Shouwa Genroku Rakugo Shinju, and Grimgar of Fantasy and Ash—all of which have continued to be varying shades of unique excellence in the time I’ve been away.

I’ll start off with MahoPri, which continues to delight me with its feeling of freshness despite continuing to (sort of, I think?) follow the franchise formula. From the imaginative battle choreography to the crisp visuals to the ongoing loveliness that is Yui Horie’s performance as Riko to the whimsical feeling of the world, MahoPri has had good episode after good episode without ever letting up. I suppose it still remains to be seen how the series holds up over the long run, but if the misfits in Riko and Mirai’s supplementary class are destined to be the other Precure, I think things are going to work out just fine.

Likewise, Konosuba continues to hit comforting and joyful notes for me, even when its on what felt to me like a bit of an off week in episode 8. Aqua’s powerful on her own, but the rest of the cast really is very good and watching them derp around the world together just makes me really, really, really happy. As you’ve seen, I continue to write about the show for Crunchyroll, but no matter how many logically reasoned articles I write I don’t think I’ll ever really be able to fully express why Konosuba resonates so much with me. Some of it is tied up with Aqua, but some of it rests in the pocket of the show’s mood/atmosphere. And that’s okay, I think. I don’t need to completely articulate from top to bottom why I like something. I’ve done enough. I’m satisfied with that.

THATS IT THATS MY NAME

On the more serious side of things as this post draws to a close, I finally caught up with Rakugo Shinju and oh. my. land. What a show, people, what a show. It’s tragic, it’s sad, it’s insightful. It’s beautifully, heartbreakingly storyboarded and directed, and every movement of the camera, cast, and sound is precisely and delicately calculated. Just in terms of sheer artistic thoughtfulness, Rakugo Shinju is a marvel, but the maturity of the story is similarly powerful in effect. I’m in awe, I’m in love. And I’m so immensely thankful I didn’t try and do something crazy like blogging this show weekly—it’s one of those things I think I’ll have to sit on for a long time before I’m really able to write about it well (forget about the post I wrote at the beginning of the season).

And we’ll finish off with Grimgar of Fantasy and Ash today, which finally drew the post-Manato’s death arc to a close in episode 8 and started to look forward to a new healing for the party in episode 9. I feel like I remember someone in the comments of a past Anime Weekly saying they were going to write about Grimgar and grief (and they may have tweeted the link at me), but I wasn’t able to find it and read it—so if you’re out there reading, send that post my way again! Anyways, the conclusion to the Manato’s death arc was as satisfying and sensitive as I’d hoped—placing Grimgar up there along with Blast of Tempest as one of the best depictions of the grieving process in anime. That’s high praise.

P.S. Watch She and Her Cat!