Sadly, I found Nisemonogatari to be inferior to Bakemonogatari in a number of ways, as well as more troubling in terms of the fanservice and sexual content of the show. For that reason, I have decided on a 6/10 rating for Nisemonogatari, and you can see exactly where it stacks up against other shows on the Ongoing Anime Rankings Page.

Nisemonogatari is essentially a well-intentioned anime that just took the wrong path in getting to where it was trying to go. The overall concept of this iteration of Nisio Isin’s novels essentially boils down to Araragi doing whatever he has to do to protect and help his little sisters. As a guy with three younger sisters myself, I understand the sentiment well and really was somewhat touched to see Araragi put his body (1/10th  vampire body , but still) on the line multiple times in order to protect Karen and Tsukihi. But, as I’ve said, the problems crop up on the path Nisemonogatari takes to get to those points.

As far as presentation goes, Nisemonogatari stands at about the same level as Bakemonogatari, with the same distinctive visual style. However, the visuals didn’t pop the same way they did in Bakemonogatari and more of them seemed to be simply gratuitous, rather than enhancing the story. The backgrounds are, of course, the notable exceptions to this, as you will see in the screenshot gallery at the end of the review. Sonically, the OST somewhat less effective. Similarly, the OPs 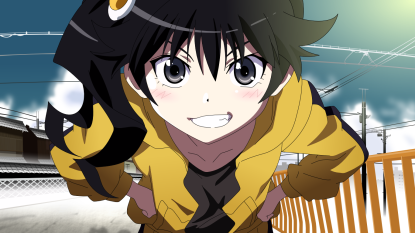 were just didn’t hit the same musical sweet spot for me as “Staple Stable” and co, while the ED was catchy. None of the themes made me want to go out and instantly buy them, but the served their purpose well enough. I should, however, mention here that the animation sequence for Karen’s OP, “Marshmallow Justice” was far and away my favorite piece of animation through the entire 11 episode series.

So, where did Nisemonogatari step off the path on which Bakemonogatari trod so well? Surprisingly, the answer is in a spot that was a definite strength in Bakemonogatari: the writing. Now, let me be clear: the writing in the sequel was not bad. But it was closer to average than I had been lead to expect from the prequel series, which was a disappointment. In many places the dialogue was not quite as clever, not quite as well paced and not quite as substantial as the dialogue in Bakemonogatari. This is much more noticeable in the Tsukihi Phoenix arc, which also hosted the infamous Toothbrush Scene. (Nope, no links. If you’ve read any of my review before, you’ll know what I think of it already). Nisemonogatari, even in the Karen Bee arc, was much more rambling that Bakemonogatari, which managed to pack both characterization and story into the same time frame. Nise, on the other hand, had several episodes which basically consist Araragi wandering about, doing a whole lot of nothing. I’m not the type of viewer who has to have plot point upon plot point, but more than once I simply felt like Nise was spinning its wheels without accomplishing anything.

While there is still characterization occurring in these episodes (except the Toothbrush Episode), they simply just don’t feel as well crafted as similar episodes in Bakemonogatari. For example, the first episode of Bake‘s Mayoi Snail arc, which is essentially just Araragi and Senjougahara talking to each other, holds up as much more entertaining and compelling than, say, Araragi’s conversations with Nadeko in the beginning of the Karen Bee arc.

I personally would argue that a huge part of the Karen Bee arc’s success is derived from the presence (once again) of Senjougahara. It is Senjougahara that raises the ongoing theme of Nisemonogatari, the fake versus the real, and Senjougahara that provides the initial tension for the arc with her kidnapping of Araragi. She is, each time she is on screen, as magnetic as she was in Bakemonogatari. Shinobu, the vampire who dwells in Araragi’s shadow, also gets more of an opportunity to shine in Nisemonogatari, and her complex relationship with Araragi is another highlight of the series.

For all that, Nisemonogatari still remains above average in terms of story and writing; it just has the unfortunate luck to be destined to be compared to Bakemonogatari.

The most troubling part of the show, as I have alluded to early, is the fanservice and sexual content. From Araragi’s continued molestation of Hachikuji to the Toothbrush scene to basically everything involving Nadeko to the incest-laden overtones/implications/actions in Koyomi’s  relationship with his sisters, there were plenty of stomach-turning moments in Nisemonogatari. While I realize that there are cultural differences at play here, I can only review Nise from my perspective as a western audience, and I simply cannot (as much as I’d sometimes like to) ignore the morally twisted nature of some of the scenes in the name characterization. There are numerous ways build character, and it is unfortunate that the path Nisio Isin chose involved such scenes.

To end on a high note, I would be remiss if I did not once again mention the fascinating discussion Nisemonogatari conducts regarding the value and nature of the fake versus the real. And perhaps the greatest boon to this discussion is the Nisemonogatari refuses to really take sides in the debate, with the Karen Bee and Tsukihi Phoenix arcs operating as conflicting opinions within the same eleven episodes. Are fakes inherently evil? Can fakes sometimes be equal or greater than the real thing? These are questions Nisemonogatari raises, and the audience is left to ponder them without too much pontificating from the show itself.

If you’re thinking about watching Nisemonogatari, make sure you’ve seen Bakemonogatari first. And if you watched Bakemonogatari and liked it, go ahead and watch Nisemonogatari. In the end, Nise gives the viewer more reasons to watch it than to not watch, and it does contain a fascinating thematic question, as well as some of the trademark dialogue and characterization of the earlier series. Just be aware of strong sexual content pretty much throughout, as well as several morally questionable scenes.