The Winter 2016 season of anime was a weird one for me—one where the unexpected winners of the season were shows I had fully intended to ignore from the start and one where old standbys didn’t manage to impress me the way they had in the past. That all being said, I’m pleased with this season, even as I look forward to the bounties of spring.

[If you want to recap the entire fall season, from my first impressions all the way through the penultimate week, you can hit up everything I’ve written in the Winter 2016 tag!]

Ultimately, being kind of fun sometimes can’t hold your show up underneath the weight of bearing numerous ugly philosophies. For every scene of Lelei being awesome, GATE throws in a scene of chilling violence. For every fun moment with Rory being Rory, the show constructs outrageous strawmen to perpetuate its regressive views on the world, humanity, and might. I’d say I had a positive experience watching GATE, but that experience was largely due to what I brought to the show (a fascination with the absolute lack of nuance in its ideological positions and a fondness for the characters I’d met in the first season—most of whom weren’t really given all that much screentime in this one).

So, while GATE is certainly a unique product of a specific kind of worldview, I can’t at all recommend it in good conscience. There are moments of fun, but there is altogether too much in the show that tends towards the dark and the disturbing and the gross.

I said early in the season that ERASED was an 8/10 show at best, but then it proceeded to upset me in a way only matched by GATE with its treatment of Airi in episode 4 and 5, and my opinion of the show never really recovered. ERASED was a show torn in half between a thoughtful character drama (which was, generally quite good) and a part-good, part-bad thriller. It was never able to reconcile these two distinct and opposed selves in a satisfying way, which meant I was never really able to connect with the stuff I wanted to like. This is no way to watch a show, really, and with my emotional investment and trust in the show shattered, it kind of stumbled along to the end until it finally fully embraced WIXOSS-style camp and suddenly became entertaining on the most base level a show can be without being utter garbage. I don’t bear ERASED any ill will, but I wish they’d started tipping people off roofs earlier if that’s what they were going to do. 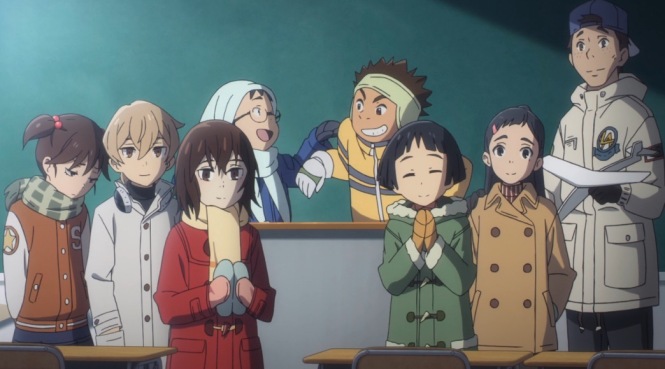 I’m left wondering if Durarara!! x2 might have felt like a better, more successful show had I marathoned it rather than watched it weekly. The extra distance between episodes made an already disjointed and scattered story even more difficult to follow, and keeping tabs on the various characters’ physical locations (let alone their psychological motivations) nearly impossible. However, I don’t think even a marathon could have saved Durarara!! from the character saturation that continually teased brilliant concepts and just as frequently withheld satisfying conclusion. There’s both a poignant human story and an incredibly smart sociological tale in Durarara!!, but it never manages to really articulate either of this elements clearly—and that’s a real shame. None of this reflects negatively on my thoughts on Durarara!!‘s first season, but it would have been so cool to see this story ends its run in a better fashion. 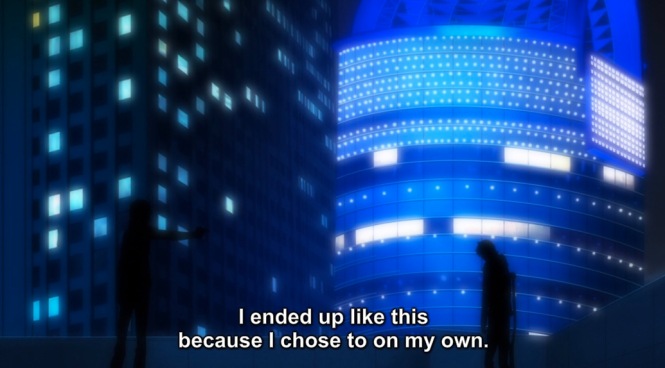 Speaking of sequels that didn’t live up to the charm of their original seasons, Haikyuu!!‘s second season wound up being a show I’m quite ambivalent on. The highs—Yachi’s wonderful arc and the entire Seijoh-Karasuno match—far outstripped the first season’s best moments, but the lows were far lower. From the tepidly paced training arc to the meaningless matches in the first part of the tournament, Haikyuu!!‘s consistent entertainment value from the season vanished, replaced by occasional burst of excellence in the midst of long stretches of dull. Worse, the previously charismatic Karasuno team (not a deep bunch of characters even in the first season) suffered greatly as the show expanded its focus on side-characters, leaving them feeling almost unlikable by the end of the show. My outrage over Oikawa and Seijoh’s (inevitable) loss to Karasuno is, I think, indicative of how completely my feelings on Haikyuu!! since the first season. Will I watch season 3? I’m honestly not sure.

I wasn’t even intending to watch Konosuba at the start of the season. While I liked the character designs, the promise of overbearing ecchi content had made me decide to leave it alone. And then, suddenly, people started talking about how the first episode was great fun because of two jerks being jerks to each other. I was in the mood for something like that at the time, but what I found was something completely different. I found a show with a sense of benignly acidic humor… and I found Aqua. I could talk about the other elements of Konosuba, but my overall feelings on the show are so colored by my immense love for Aqua that it would be impossible to talk about it without talking about her. Aqua’s one of my favorite anime character of all time. She’s lazy, petty, naive, rash, foolish, and she walks into dumb situations without a second thought. She gets beaten down by the world thanks to her own idiocy, but she bounces back. She’s all of the worst  (and some of the more neutral) parts of me and I love her for that.

On the whole, Konosuba wound up being a show I laughed at a lot, but not one that really is going to stick with me the way other pet shows might. But Aqua. Aqua will remain in my memory and my heart for a long time. 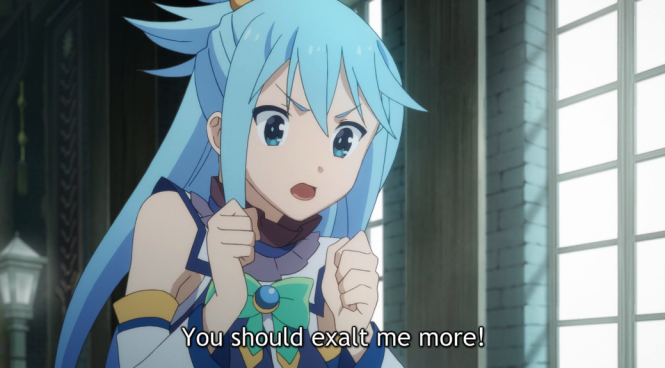 While the kidnapping arc was a significant blemish on Akagami no Shirayuki-hime‘s second season, it wasn’t enough to keep down the best parts of the show—which bloomed in the first quarter and absolutely flourished in the final few episodes of the season. This is a remarkable show. A special show. One with a character that it unparalleled, at least amongst the anime I’ve watched. What we got in Shirayuki-hime was an elegant, intimate pseudo-narrative (but, certainly, a story) of two friends who became lovers and how their love and kindness spread to those around them. Massive credit is due to both director Masahiro Ando, whose wonderful touch made the show sparkle visually beyond the shoujo glimmer, and composer Michiru Oshima, whose score was absolutely divine and a pivotal element in making numerous scenes work. This is one I can’t wait to buy. 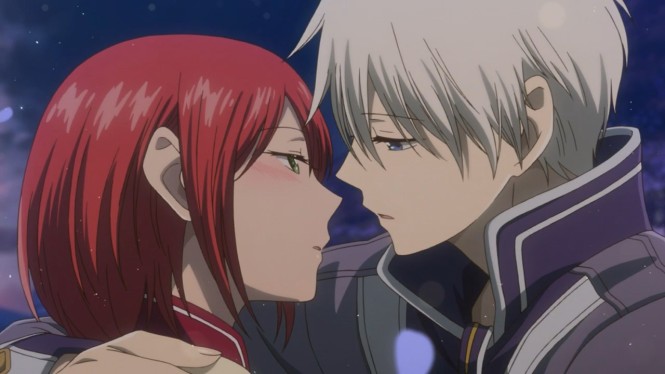 An unexpected treat that came short and late in the season, She and Her Cat deserves the spot its getting here for its quiet depiction of a young adult going through the difficult transition from college to the real world through the eyes of her cat. Although I had a few minor issues with the way the Daru’s narration was handled throughout the series, overall it was a lovely piece of atmospheric anime. Highly recommended alongside the Animator Expo short “tomorrow from there.” as required viewing for young adults struggling through the pains of transitional life periods.

Another fantasy light novel adaptation I didn’t even intend to watch at the season’s start, somehow Grimgar found its way almost to the very top of the metaphorical seasonal pile. The merits here, I’m told, are almost entirely due to the scriptwriting and directorial efforts of director Ryousuke Nakamura, who transformed a run-of-the-mill light novel that peaks through the cracks ever now and then into a far more mature, intelligent, and valuable production. Grimgar‘s certainly got its flaws—irritating fanservice, insert songs that take over the scene at inopportune moments—but it’s also got huge strengths in its notable aesthetics and thoughtful writing/pacing. There’s a lot to enjoy here, and a lot of heart. And Yume is a joy. 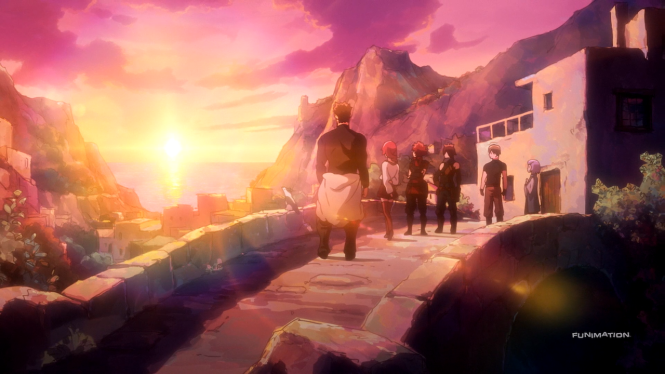 And so we arrive at the best show of the season—my pick for the title from week one, and a pick that never wavered. Although we had our fair share of good (and even great) episodes from various shows this season, Showa Genroku Rakugo Shinju was consistently a cut about everything else that aired this season. While, at the time of this writing, the finale hasn’t yet aired, that doesn’t matter. Rakugo Shinju is a show that inspires absolute confidence. Although well-written, it was truly carried by the excellent cinematography under the direction of Shinichi Omata, whose command of close-ups, blocking, and impressionistic shots gave us a rich and varied visual tapestry on which to see this story play out. It’s a beautiful show, and I highly recommend it. 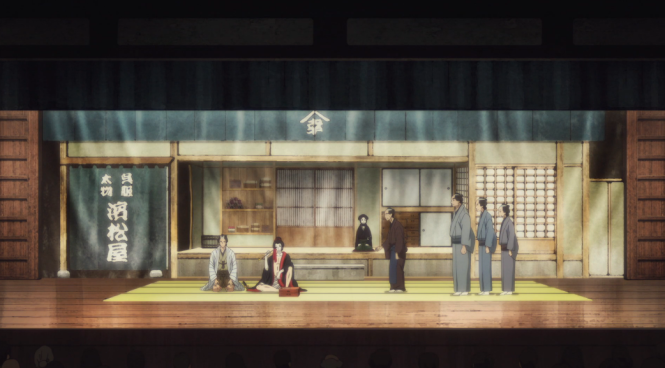 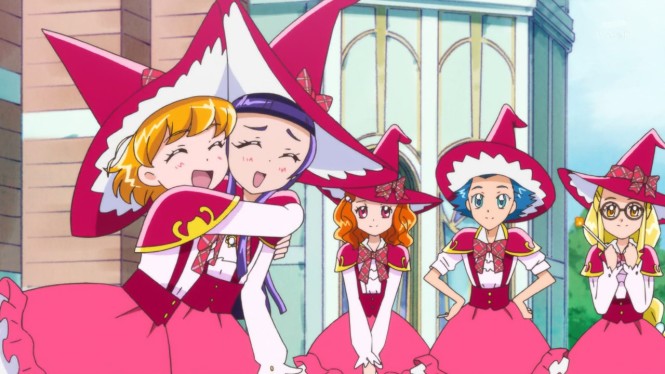 And that’s a wrap for the Winter 2016 season (although we’ve still got an episode of Rakugo Shinju left). On the whole, I’m pretty  happy with it, but I’m excited for spring to come! See you guys next week for some premieres and stuff!